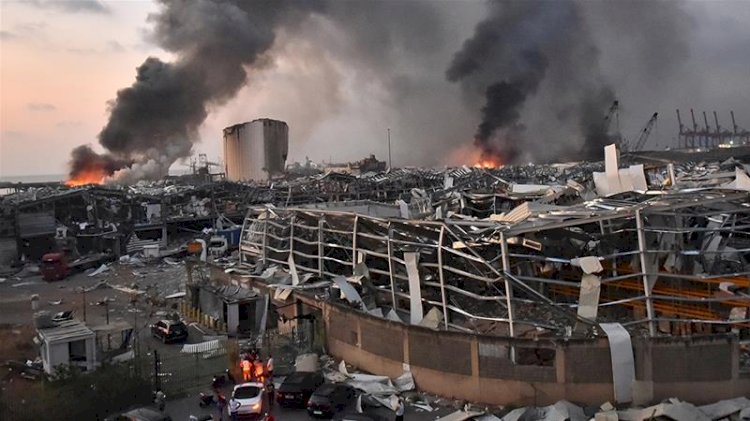 Huge explosions in Beirut caused death more than 100, 4000 wounded, hundreds lost and 300 thousands displaced. The explosions were so destructive that over half of the city was effected. Lebanon, which was torn apart with sectarianism, ethnic wars and clashes for 40 years, had never lived such destructive explosions.

It is told that 2.750 tons of ammonium nitrate but it is still not know whether it is a sabotage or not. There are many speculations about the reason of the explosions. Another source close to a port employee claim that a team that inspected the material six months ago warned it could “blow up all of Beirut” if not removed. The imperialist aggression over Lebanon has created so deep conflicts that the real responsibility will not be revealed in the fragile sectarian system, which established on the interests of bourgeois sectarian groups.

Lebanese people have been on the streets against poverty, economic collapse, sectarian system and imperialist influence since October 2019. Pandemic affected Lebanese poor people so deep that lead a protest wave of the poor regions had broken the lockdown.

The explosion, regardless of its source, will deepen the poverty and misery for the Lebanese people. While Lebanese workers are struggling with the Covid-19 outbreak on the one hand, on the other hand, they have to tackle the economic crisis, which pushes almost half of the population to hunger and misery. While there are problems in providing electricity to hospitals even in the normal period, it is obvious that this problem may become more burning with the collapse of the city's health, electricity infrastructure have already collapsed.

Lebanese workers, who have been fighting for years in the grip of ethnic and religious polarizations on the one hand, and imperialist and Zionist pressures on the other, are the victims not the bourgeois leaders of the sectarian system such as Nasrallah, Hariri and Aoun who are now at the target of the people’s anger.

The imperialist-capitalist forces and their local collaborators turned it into a war zone are the primary responsible for this disaster. Those who shed crocodile tears for Lebanon and send so called humanitarian aid since yesterday should immediately hands off Lebanon.

The endless bloodbath in Middle East can only be stopped by a socialist revolution. Socialist Middle East Federation is the only real future project against sectarianism, imperialism and capitalism.

We ,the revolutionaries all around the world, are the only real friends of the Lebanese poor people.
We, the ISL, are sending our deepest condolence to Lebanese people.
We call the Lebanese youth and the workers to join the ISL and our comrades the Youth for Change in Lebanon.