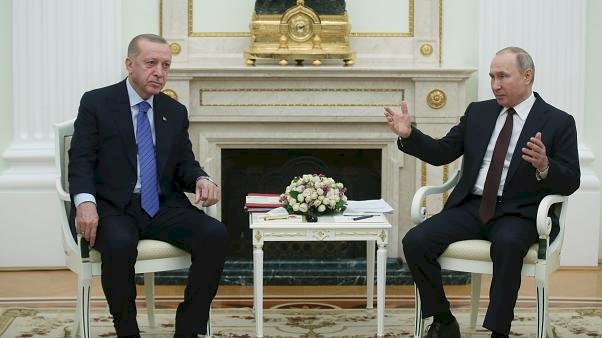 After all the blood spilled in Idlib, Erdogan and Putin signed the Moscow Agreement, which reflects the military balances in the field. The agreement reflects the progress of Syrian Army on the field, unlike Erdogan’s previous sharp statements.

Thus, two vital conflict issues M5-highway and the western rural part of Aleppo were given to Assad. Apart from that, the agreement envisages that the Turkish Army Forces (TAF) and Russian troops patrol the Lataki-Aleppo-highway (M4) and the jihadist groups will retreat 6 kilometers north of the road. However, it should be emphasized that it is not an easy task to remove the jihadists from the M4 highway.

On the other hand, as a result of the progress of the Syrian Army, the TAF observation points- which were under the siege and remained inside of regime territory, became completely meaningless. Withdrawing from these observation points make AKP’s fiasco apparent. That’s why, AKP will hide this reality for a while.

According to the agreement, the groups defined as terrorists within the jihadist groups will be liquidated. These groups include the strongest and most fanatical groups in the field such as  (Hay’at Tahrir al-Sham )HTŞ, Hurras El Din and Turkistan Islamic Party (TIP). These groups which have tens of thousands of militants were the dominating Idlib  before the Idlib operation. The burning question is whether the most fanatic ones- that made Jisr-al Shoughr their castles on the M4 highway- will accept this agreement or break the agreement after accepting it.

Let’s say, the HTS, which had serious defeats in the field, and its leader Colan is convinced in some way, still, it is very difficult for derivative elements of the ISIS  such as Hurrays El Din and TIP to be controlled by Ankara and  join the FSA as mercinary. Knowing that Russia attacked Idlib because of these groups, the AKP government of Turkey will have to be more clear against these groups.

If these groups ruin this extremely fragile ceasefire, they will ruin everything for AKP. Any violation of the ceasefire will, sooner or later, be a starting point for the next military move of Russia and Syria.

Therefore, both sides will seek to strengthen their military capacity and tactics throughout the ceasefire process. For example, if the TAF military continues military build-up in the region, Russia will locate the most striking powers of its navy in the Eastern Mediterranean. They have already moved plenty of warships through Bosphorus to Syria. In addition, bringing more warplanes to Tartus and developing more effective air defense methods against TAF drones are other  precautions that Russia will take. Furthermore, Iran will work more on drones technology and it will find enough time to transfer its accumulation in drone technology to Assad. On the other side the AKP government will be in a rush to have the support of the United States and NATO against Russia. In short, it is still not  certain how long the ceasefire process will be, but both sides will continue to prepare for a possible war.

If the TAF did not intervene in Idlib by taking great risks, the Syrian Army would have defeated the jihadists on the battlefield. But Erdogan prevented the Syrian Army’s  decisive victory against the jihadists at the expense of  high number of casualties. This has been the main result of all these adventures: thanks to the  casualties and the enormous risks taken, the civil war in Syria has prolonged.

The ceasefire agreement emphasizes Syria’s sovereignty and territorial integrity. However, despite these statements, everybody knows that AKP wants to be permanent in Syria. If Moscow Treaty is realized, TAF will continue their presence on Idlib-Turkey border area where jihadist groups are stuck. Of course, the jihadists should not do things that would break the ceasefire. If the AKP can create some kind of stability in this balance, the presence of TAF in Syria will be extended. The center of Idlib will be in the small area which is controlled by TAF.In addition, the AKP will keep emphasizing that it prevents all possible refugee flows.

Assad’s greatest gain is the massive support of Russia. Despite all the pressure of Erdogan and all-out war threats, Putin didn’t care about these threats and Erdogan.

The agreement requires the opening of the Aleppo-Latakia highway as well as the Aleppo-Damascus highway. That is strategically important and crucial for Syria’s economic recovery. Dera-Damascus-Humus-Hama-Aleppo and Latakia connection- which is vital for Syria – will be provided from the south to the north. This is also a very critical achievement for the Assad government. On the other hand, the fact that the remaining problem in Idlib- and also if it develops- may bother Assad, but it should be noted that the balance of powers has created this situation.

Despite the whole world knows that Russia hit the TAF (happened on 24th February and 34 TAF soldiers died), Erdogan visited Putin in his country. This will be a debate in Turkey. The pro-AKP, who shouted “Burn Idlib, Demolish Syria”, will attempt to propagate victory of the agreement, but the situation is badly serious for the AKP.

This is a great fiasco for Erdogan and the whole world has seen it. Apart from this fiasco, the progressive elements of the social opposition should criticize the understandings of  AKP that “How we can benefit from the crisis?” and “What kind of advantage we can take by involving the neighboring countries?” Today it’s Syria, tomorrow Libya, and what’s next?  The peoples of Turkey must face with this militarist, sectarian, expansionist, extreme-right line.