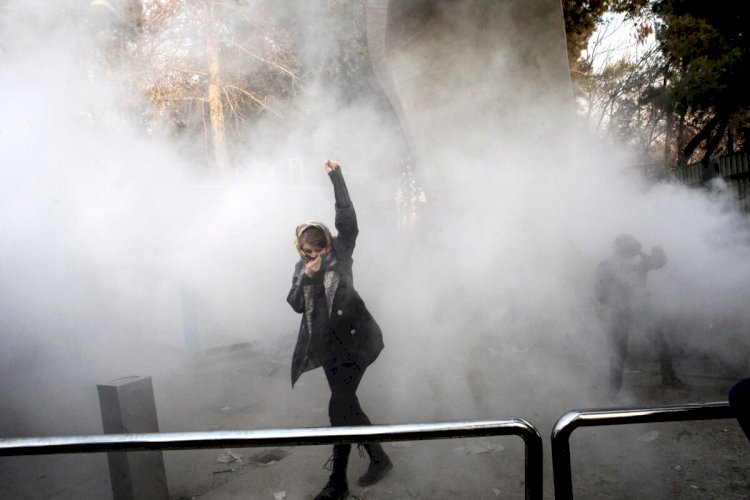 Iran, which is one of the most critical countries of the Middle East, is experiencing very critical periods in terms of both rulers and laborers. Mass graves were dug in Iran, one of the countries that were hit hardest by the coronavirus pandemic, and the people was the worse with the embargo of US imperialism which left them to die. Over 10 thousand people lost their lives in official figures. Since even the most basic medical products prevented by the embargo, the Iranian people were literally slaughtered in a deliberate way. Above all, the rottenness of the mullah regime ensured that the Iranian people were suppressed with a brutality and misery.

Rebellion before the Pandemic

As we remember, there was a heroic rebellion, which continued throughout October and November of 2019, revealed strikes, social explosions in the face of deep economic crisis  against the corrupt regime. Unlike the previous riots of the secular opposition, the subject of these riots was the conservative and poor sections of the society that is the base of the regime. Therefore, the regime could not prevent these actions as it intended.

The vast majority of actions resulted in burning gas stations, banks and government buildings. The streets were filled with slogans against the state and Khamenei. This fact, points a historical break. The regime's character, which was standing only by oppression, had begun to lack its social base. The Iranian government, which could not prevent the protests, authorized the police and soldiers to use weapons, and about 1500 people were massacred, 8000 were detained and thousands were injured. However, due to the pressure of the state, many injured people could not even go to the hospitals because of the fear of being detained. This week, the capital punishment for 8 protesters was announced. It is important to mention that none of these eight people is leftist or have a relation with any political organization.

There was another dynamic of this historical break: the previous uprisings had also included economic and democratic demands, but there were two important differences in these actions. First, people do not go to streets due to the sectarian divisions any more.  Secondly, this new movement and its actors broke from the establishment opposition that is called reformists.

Since the reformers were organized within universities and the middle class, the movement's horizon and its forms of action had serious limitations. However, the reformers' base did not participate in the actions where the banks were set on fire and the class anger that the liberal borders could not compatible. Therefore, the previous so-called reformists (moderate Islamists, liberals middle class elements) did not attend this movement. Moreover, it is seen that there was so great anger on the street that the opposion wing of the regime was also on the target. The slogan was “Neither the Islamic republic nor the reformists!” This attitude towards reformers is an important and progressive for Iran's social opposition.

The main figure of the rebellion was the poor. The first slogan at the Haft Tappeh sugar cane factory that led by worker leader Ismail Bakhshi was “Work, Bread and Freedom”. This great strike and workers 'assembly movement is historically important in terms of offering the Middle East's most advanced class struggle experience under socialist leadership. This slogan, gained the support of the large sectors of society, students and intellectuals, caused the Iranian regime to exert pressure even gradually and even loosen the pressure from time to time.

Ignoring the economic demands, the Iranian government was trying to suppress the rebellion instead of meeting the demands. Then the US embargo started and oil sales dropped. The regime tried to sell oil through China and Russia. While 40% of the Iranian economy is based on oil, 20-25% on petrochemicals and 10% on steel exports, 70% of the country's overall income is based on export. All these revenues were cut due to the embargo. And the flow of money completely stopped.

In that period, the government did not pay salaries, the dollar increased dramatically, and a large part of the society began to live below the poverty line. The middle classes are impoverished. Unemployment rates have increased considerably, house prices have increased, real income has been decreased, and many businesses and companies have gone bankrupt. All of these caused unemployment to increase. The poverty is so deep and the people are so miserable that some workers suicided in their workplaces. Poverty has become so deep that families are trying to survive by renting an apartment with other families. In fact, penthouses and terraces are rented for 50 thousand tumen per night.

Revolts in Middle East and Iran

Iranian exports to Syria, Iraq, Yemen, Lebanon and other Arab countries, but there was a serious decline in all these revenues because of the embargo in this process and the war in Syria and the uprisings in Iraq. Iran, as a regional imperial power, spends its entire existing budget on the imperialist aims of the mullahs with its huge investment in weapons and political influence.

Because of the US-Iran tension, US imperialism is attacking Iran's political spheres of influence, particularly Syria and Iraq. After the assassination in which the USA killed Qasem Suleimani, the Iranian state gained an nationalist propaganda opportunity against the riots. US imperialism has made a life-saving move that will benefit the Iranian state. However, the anger of the people did not end. One of the demands of the people in the actions that have been going on for months, especially in Iraq and Lebanon, is the end of Iranian influence and secularism.

The rulers, which rule almost the entire region through sectarianism, have common interests in Iran, Iraq, Lebanon, and therefore the collective demands of the peoples are under pressure of these regimes. While the Iranian-backed Shiite militias kill the people with snipers in Iraq, the political figures of the current sectarian system take part in the new government after the government overthrown by the protest wave in Lebanon.

As in the rest of the world, the popular revolt in Iran has been interrupted because of the pandemic, but the dynamics remain. The coronavirus has put Iran, which is already bad economically, into a worse crisis. When the coronavirus epidemic started, the regime, which first hid it by lying because of the election, was forced to state after the pandemic was declared worldwide.

The protests started again as unemployment and poverty increased in this process. Two strikes have been held at the Haft Tappeh factory for two weeks. It is obvious that this will not go like this, the Iranian people are ready to explode, but unfortunately there are no concrete demands and campaigns. There is a need for a Socialist Revolutionary class-centered political vanguard that can do this. There is a need for a class party under which teachers, workers, pensioners and students can unite.

There is no other way than to overthrow Hameney in Iran, reforms and the Islamic republic have alreadyout dated in the eye of the people . For this reason, the only way is a socialist revolution in Iran! But there is no revolutionary socialist leadership to accomplish this task. Existing committees and parties cannot come play this role and organize the workers, and they face pressure. Also reformists becomes obstacle and are trying to prevent radical actions.
While we were writing this article, Haft Tappeh workers took a stride one step further to defend their factories, which the regime attempt to close and privitize, and walked towards the city center. This is the real power that will change the future of the Iranian people.