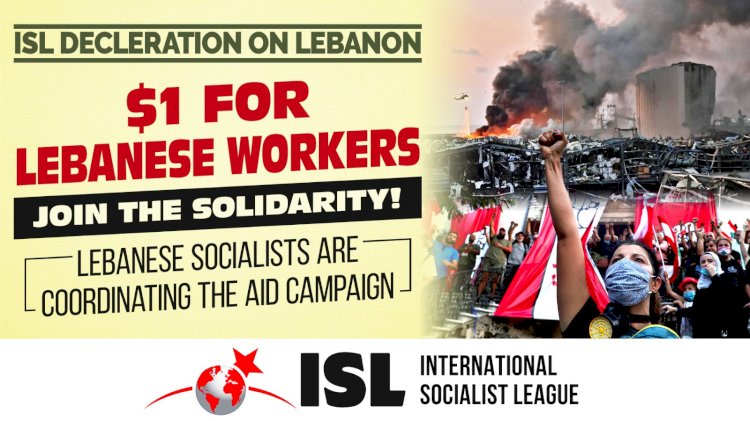 The horrific explosion that took place in the Port of Beirut was the last and indisputable proof of the bankruptcy of Lebanon’s sui generis bourgeois political system. The sheer carelessness of the Lebanese bourgeois rulers, who allowed thousands of tons of explosives that could blow up half of Beirut, the heart of Lebanon, to be stored in the port without the necessary security checks, can only be explained by recklessness, ignorance and bribery.

It has been reported that 220 people have died due to the explosion so far.  A dramatic picture that will become even darker as there are hundreds of people still missing and there is no hope for them anymore. In the explosion, 6 thousand people were injured and 300 thousand people were left homeless. In Beirut, where poverty is increasing rapidly and rents have climbed to astronomical levels due to housing shortages, life has become much more unbearable for poor workers.

In Lebanon, that is struggling with the worst economic crisis in its history, the working class has been on the streets for almost a year against that high cost of living, unemployment and mismanagement. Not even the conditions of the pandemic were able to stop the struggle against the corrupt order. Moreover, the pandemic caused the economic problems to worsen. This is why anger was growing in Lebanon and the conditions of a social explosion were maturing day by day.

It was precisely at this time that this latest disaster, caused by the deadly negligence of the Lebanese elite, sparked anger among working people and the youth. While on the one hand, the people had difficulties in accessing basic food supplies and were also struggling with power cuts and accumulated mountains of garbage. On the other, the luxurious lives that the Lebanese capitalists did not hide at all were already flaring up class anger. The result was the occupation of the ministries by the demonstrators and the fall of the government after violent protests.

It is not easy to displace the Shia, Sunni and Christian elites in the bourgeois order in Lebanon, which is designed according to ethnic and sectarian divisions. The overthrow of governments only means new negotiations and redistribution of corruption. So there is great anger against the current rotten system and all these elites that are sucking Lebanon’s blood.

After all, the resignation of the government and repeating the elections with the current parties does not make much sense. It is the unity of the working people under the socialist flag that will break the chain in Lebanon. Our Lebanese comrades of the Youth Movement for Change are fighting for this historical task. It is vital to build a revolutionary socialist force to unite working people of all religious identities.

At present, the imperialist capitalists are trying to extract concessions from Lebanon under the hypocritical name of aid. The leading figure among them is Macron, who has the blood of the Yellow Vests on his hands. He has visited his former colony, Lebanon, making a political spectacle. Not only Macron, but all imperialist circles in the region are in all sorts of intrigues to play their game in Lebanon. From the ISL, we warn Lebanese workers and the youth about these imperialist opportunists. Trust only in your own power and in revolutionary socialists trying to organize the power of the working class.

In this context, class-conscious workers in the rest of the world also have an important task. The ISL calls on the workers and the youth of the world to stand in solidarity with the Lebanese workers. The stronger our 1 dollar/1 euro campaign for Lebanon is, the stronger our solidarity with the Lebanese working class will be. The coordination of this aid will be managed by Lebanese revolutionary socialists personally. Now is the time to raise class solidarity. The stronger this solidarity, the bigger the contribution to the development of Lebanese socialism.