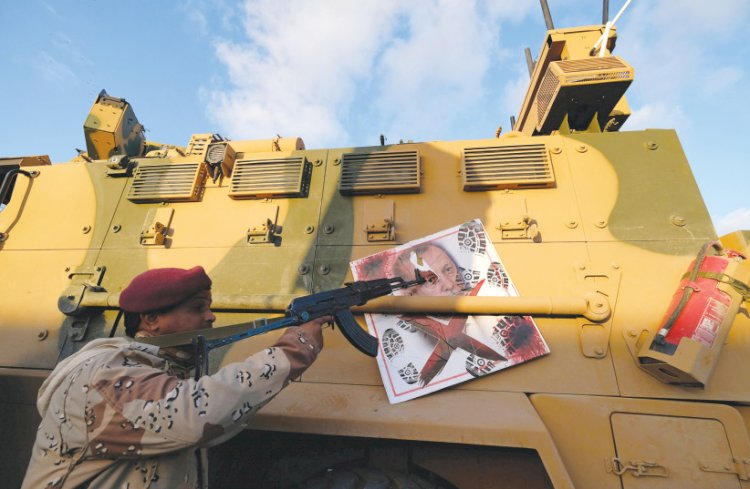 Oil-rich lands of Libya have been washed with blood since 2011. Supposedly, Gaddafi would be overthrown and democracy and freedom would come to the country. Reversing the truth in this way shows the power of the imperialist propaganda machine. In reality, it destroyed Libya. Imperialist vultures that wished to plunder the country's resources, where the desert meets the sea, settled down in the country. Since the biggest vulture (USA) is not around these days, smaller vultures, who find the opportunity to pick up some share from the corpse of Libya, peck each other. And finally, the big fight is about to begin.

We know from the history that despotic regimes, which are struggling with the political and economic crisis, having difficulties with social opposition and suspecting their future, see the war as a kind of savior to open the way. The case of the AKP is more and more likely to be these examples.

Neo-Ottoman dreams are the biggest trump of the AKP government, who is losing its popularity,  pessimistic due to the economic crisis, losing youth, incapable of breaking the resistance of the opposition. Because the neo-Ottomanism grasps the nationalist conservatist base. Libya has turned into a very convenient field to satisfy these ambitions. As a matter of fact, the AKP press glorifies the achievements in Libya after Syria.

Sub-imperialist ambitions are exhilarating to reduce Libya to the status of "vassal state", which receives orders from Ankara, to seize Libyan oil, to grab tens of billions of dollars construction contracts and to get the lion's share in the eastern Mediterranean energy resources.

By the victory, the AKP would take against the UAE, Sisi, Greece, and Saudi, AKP would have a big success story that provides the propaganda of "the resurrection of the Ottoman Empire" and "strong Turkey".

Will War Erupt in Sirte and Cufra?

In order for all this to happen, another major and decisive blow strike to the Hafter troops and its allies is needed. The AKP's military success in Tripoli is still half -victory. Even though the coalition regresses, it is still far from a definite defeat. Therefore, both sides deploy their forces to Sirte and Cufra for a real showdown. Both sides demonstrate their determination at every opportunity to be a deterrent. While Sisi was declaring his red lines (June 20), on the other hand, Defense Minister Hulusi Akar and Chief of General Staff Yaşar Güler went down to Tripoli on July 3 and underlined Erdogan's will.

Seaport city Sirte, where located in the middle of the country, has the 60% of the Libyan oil. And Cufra has the critical airbase controlling the country's airspace. Therefore, the one who seize Sirte and Cufra, will have the lion's share from Libya. But the issue for AKP is not limited to this. We do not doubt that they dream of moving forward in eastern Libya after the clear victory in Sirte.

AKP is courageous because of the following evaluations in the military field:

It was unimaginable before, but when the USA left Libya on its own, Russia stepped in to gain a room in Libya. The opportunity to control Libyan oil, which will open new opportunities for a military base or Gazprom in Sirte on the Mediterranean coast, seems quite attractive to Russia. But the conditions are very different from those in Syria. So, Putin made a move with Wagner, the mercenary of the Kremlin, which was an informal means of war. So if you ask Moscow, it would deny their presence in Libya. But in reality, the Cufra airbase is currently the home to Wagner troops, which are claimed to reach 3,000 people. Thus, Russia does not take official responsibility. Although Wagner will suffer losses, Russia will not have to respond violently to these losses. In the past, in the Deyr Zor, Syria, Wagner was sent along with the Syrian Army to attack the oil region, and together with the Syrian soldiers and Wagner suffered great losses because of the intense air attacks of the USA. Russia did not declare these losses and preferred to ignore them.

Wagner previously held important roles in Ukraine and had been effective in ensuring actual independence and division in Luhansk and Donetsk in the east of Ukraine. Now, there are Libyan Islamists and more than 10 thousand FSA experienced war fighters coming from Syria and the Turkish Army against Russia. As a result, Moscow can re-position its forces in a possible success or failure. But after the defeat of the Tripoli attack and the withdrawal in May, Russia intensified its support for the Khafter troops. At the beginning of these, 14 Mig-29 and Su-24 warplanes were transferred to Libya over Syria. The TAF drone, which attacked in a coordinatedly, played a big role in the war, and nullified the air defense systems of the Hafter troops. When the Russian Pantsir air defense systems, which the UAE paid for, failed, the counterattack of the Turkish Army-backed National Consensus Government had been successful. Can Mig-29s end TSK's drone superiority?

Here is another critical question: Who will fly these modern jets? At this point, they claim that the experienced Russian fighter pilots sent to Libya as mercenaries. It is obvious that Mig-29 will not work without such a pilot. No wonder that Pantsir air defense systems fail without advanced radar systems that support the Pantsir air defense system and skilled operators to use it. Actually, it was seen in the photographs that the radar equipment in the new Pantsir systems given to Hafter was developed and the extra small balls were added to the device. In short, it will be of great importance whether or not the TSK drones can be stopped in the battle for Sirte.

Sisi declared that Sirte is the red line for the security of Egypt and they would directly intervene in Libya after a possible attack. Accordingly, it is known that the Egyptian army has been deployed on the Libyan border in case of an alarm. However, the Egyptian economy is awful and largely standing with help from the UAE and Saudi Arabia. Apart from this, winds of war are blowing on the southern border with Ethiopia due to the dam issue on the Nile River. It is also possible that Egypt may be perceived as an invader in Libya and gotten stuck in the swamp. It is obvious that one foot of Russia is outside of Libya. When an armed conflict between Turkey and Egypt erupts Egypt would possibly fend for itself and a defeat may be the end of Sisi.

Knowing the problems of Egypt, the AKP front does not take Sisi seriously. Although the proximity of Egypt to the front line is a great advantage, it is another question whether the Egyptian army, whose capabilities are controversial, can achieve. So Sisi tries to seem disincentive to prevent the AKP from laying on Sirte. We will see if Egypt will really bring troops to Libya. Swamp and frustration are not impossible.

The Limits of the Turkish Armed Forces

Military experts of the TAF, Bayraktar drone fleet, Storm howitzers, 10 thousand FSA forces from Syria and local forces will be loaded in Sirte in the coming days..

The weak points of these attacks are as follows:

The revolutionary task is to reject this imperialist war. In order to smash imperialist powers and local exploiters in the Middle East,  we must raise socialist organizations. The only alternative to this bloodbath is the struggle for a Socialist Middle East. As class-conscious workers and revolutionaries, we have to be equipped with an internationalist revolutionary consciousness to grow this struggle. One of the concrete meaning of this is to fight against national exploiters first; and defeat their chauvinism, nationalism and expansionist dreams.