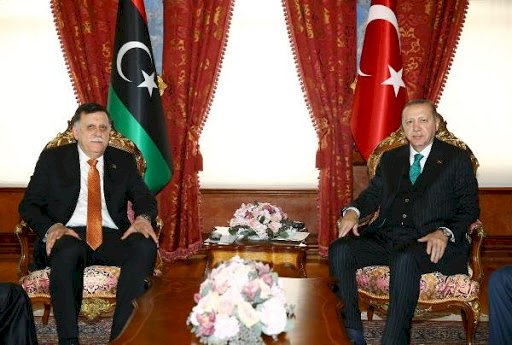 How can Neo-Ottomanism be defined? Sultanate, caliphate or expansionism... Today, Sultanate means one-man regime in Turkey. Therefore, we have said that “Erdogan's successor will be from the dynasty, and Süleyman Soylu (Interior Minister) will be liquidated at an appropriate time”, because the sultanate requires so. The sultanate also requires that the law should be put away “to a large extent” and democratic rights should be downgraded similarly. We put the phrase in quotation marks, because despite all the pressures, the social opposition could not be fully wiped out, so there is no risk free situation for the sultan. But there is still a kingly arbitrariness and limited/controlled tyranny.

Caliphate is a title of the sultan. So, the one-man regime finds a part of its legitimacy on the "national will" that takes place through elections, but finds a part of it in a "decision from the skies" (which is a line of poetry used by Erdoğan for presidential election campaign, referring to a divine power – translator’s note). Celestial references are combined with Islamist emphasis. Though, conservative social engineering has not yielded much results, even to some extent, has backfired, but efforts are not over. Historically, caliphate also means the leadership of the entire Islamic world. At this point, expansionism begins.  Claim of “The Great Turkey" that is considered to be as “the whole word against us”, is at the center of the Neo-Ottomanist discourse. For the credibility of this discourse, he needs a success story of conquest.

Currently, 4 regions in Northern Syria are in the hands of Turkish Armed Forces (TAF) and TAF-led armed groups.

Policy shift from former Foreign Minister Davutoglu's “zero problems with neighbours” to "Turkey does not fit within existing borders" is related to the AKP's spotting of new opportunities in the Middle East. The turmoil in the Middle East meant new possibilities and neighboring Syria in particular was fragile. The opportunistic character immediately came to light: “We cannot close our eyes to what is happening in this ancient Ottoman land” and so on…

The opportunities were utilized. Failure to overthrow the Assad regime was a fiasco; but the AKP "utilized" new opportunities that emerged as time went on. The Free Syrian Army (FSA) militia, which remained unprotected and moneyless over time, were recruited as mercenaries and turned into the armed unit of the TAF. The USA's retreat from the region and the alliance with Russia opened new doors, and eventually conditions were matured to get a slice of the cake from Syria.

Maybe the Idlib war was the decisive war for this last February and early March. Damascus was prevented from saving Idlib at the expense of falling out with Russia. The Moscow Agreement signed between Putin and Erdogan has many fragile elements; but after this point, it is very difficult for Syria to take over Idlib under these conditions. The TAF has so much build up in Idlib that Putin might decide to temporize and wait for the best time, instead of taking big risks. This situation is also beneficial for the USA because they can also be comfortable in the areas they occupied in Syria. Thus, a divided Syria becomes evident and this division will probably be permanent. From the viewpoint of Damascus, other regions are hopeless case unless Idlib is saved.

One of the most important aspects of the expansionist policy of AKP is related to the Kurdish national movement. The TAF, which can organize pinpoint drone attacks to the Qandil region (the headquarter of PKK) in Iraq, also showed its strength in Idlib. The TAF, which uses the technological facilities very well, has turned the military balances in its favor to a great extent. Indeed, the national aspirations of the Kurdish people in Rojava have been heavily damaged. The Rojava arch in the east-west direction, which was supposed to be a new experience, is now almost a dream. The Syrian Democratic Forces (SDF), which lost the Afrin and Tel Abyad - Ras al-Ayn lines to the AKP-guided FSA and saved Kobani and Qamishli regions only through the Russian intervention and concessions to Damascus, is dependent on the USA. The SDF was left alone when things got complicated but it was used to be celebrated by the West while fighting against ISIS. The SDF holds vital oil regions for Damascus on behalf of the USA. Damascus is on its beam ends and the AKP front is happy with this. For now, they are not in a position to worry about US weapons and oil revenue going to the SDF. Because the balances in the Syrian field are reversed, this time the USA is needed as a balance power against Russia. In short, the current deadlock in the Syrian land will serve the goals of the AKP.

Libya is a great opportunity for the AKP, for its rich oil reserves and its profitable deals in the eastern Mediterranean energy basin. The expansionist attempt here is actually more striking. Firstly, an overseas military intervention is at issue. Again it is a perfect period and an environment for an intervention. The USA killed Gaddafi and overthrew the regime, but they are not around. Europe, which remains leaderless without the US in Libya, is never agressive and adventurous. Plus, they are divided. France supports Haftar centered in Benghazi, Italy (like Turkey) supports Tripoli-based Government of National Accord (GNA), but they have no army on the field. In this case the field of civil war is left alone for Turkey, Russia, Egypt and the United Arab Emirates (UAE). Russia is on the field indirectly and tentatively. In the Libyan civil war, no party has a reliable forces on field, neither anyone intends to put its army on the field. All forces use mercenaries but none of them are bevy and experienced in war like FSA of TAF. So far, 9600 paid FSA militants have moved from Syria to Libya, according to the Syrian Observatory for Human Rights, more than 300 of them have died in clashes. The AKP is driving these militants to the front line in Libya as in Syria. This is also an indication of the AKP’s comfort in Syria.

With the AKP's intervention, the balance of power has changed a lot in Libya. The FSA, together with the Tripoli-based Islamist militants, repelled the Haftar troops that push for Tripoli and launched a counterattack. Thus, the Tripoli-based GNA has secured the coastline in the west of Tripoli as well as securing Tripoli. It was once again the TAF drones that made these advances possible. Aerial footage of demolition of military equipment sent by the UAE to Haftar are constantly served to the media. Apart from that, the TAF's military experts are also on the field. News of secretly buried TAF officers and members of the National Intelligence Service in the last months had made tremendous impact in Turkey. In short, Haftar and his allies seem helpless. Even though the news of 8 Russian warplanes coming from Syria and the threat of a "big air strike" from Haftar’s officials is reflected in the press, it is quite possible for the TAF to attack in Libya with F-16s as a response. Sisi, who is the most disturbed by the progress of the Tripoli-based GNA, will consider “overtrumping”, but after this point, he has any more options. Pantsir air defense system of the UAE was ineffective against the TAF drones. What else can Egypt provide for the Haftar troops? The best scenario that they can compromise on is  that Russia pull the wires and an agreement on a divided Libya. But in this case, the agreements signed by the GNA, which the UN recognized as a legitimate government, would mean the consolidation  of AKP’s conquest in the northern Africa.

As seen, an objective assessment shows that the expansionist policies of the AKP has made room for itself in the Middle East under the current regional conditions. Well, is this “room” guaranteed? In my opinion, international balances are quite favorable for the AKP, but the main problem is internal: the economic crisis and social opposition. At least half of the country is not pleased with the AKP government and moreover, the AKP is losing its ground little by little. Although this expansionist sub-imperialist policy is “successful”, there is no increase in the AKP's social support. The AKP has polarized the country so much that Erdoğan’s sub-imperialist "successes" have received little attention other than his own base.

As long as the AKP remains in power, it will not give up this Neo-Ottomanist expansion policy. However, the economic situation is disastrous. Sources allocated to military spending put a strain on the weak economy. Oil revenue which is supposed to come from Libya is not piece of cake and it is certain that it will not be coming today or day the after. As a result, high taxes taken from the laborers and those derived from cheap labor in Turkey is spent for this military purposes. Hence, this expansionist policy is the enemy of the working class. A consistent anti-imperialism requires opposing this aggression.