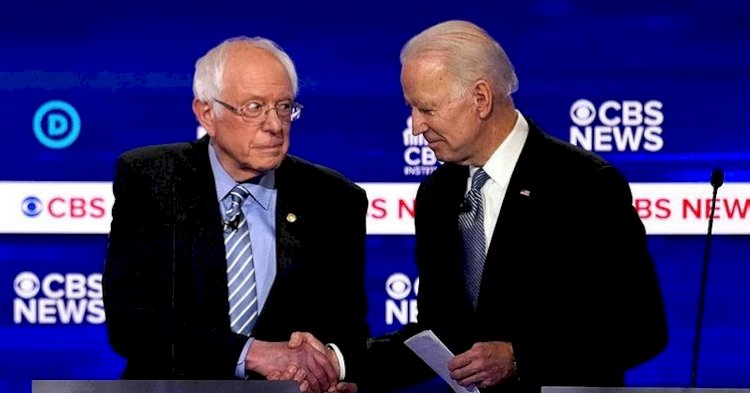 Yesterday, Barnie Sanders announced in a short video that he drops out of the Democratic Party primaries for the November 2020 Presidential Election. Thus, the wind of Sanders, which started before the 2016 presidential election, has come to an end if we take into account the advanced age of Sanders and the huge disappointment among his supporters.

He announced the suspension of his campaign at such times that contradictions of the system have come to light in an era when the US was (and still is) on the verge of such a crisis comparable to 1929 Depression (more than 2008) such that tens of millions of laborers joined the army of the unemployed; experiencing a collapse of the health system in the face of the Covid-19 epidemic in such a way that reminds us the significance of Sanders’ slogan Medicare for All; witnessing the large and small struggles of the laborers against the employers who drive them to death all over the country; Latino and black communities being left helpless against Covid-19; the popularity of the Trump administration gradually decreasing. In short, at such times that the “American Dream” breaks down. A really bad timing to withdraw for a “socialist”.

Therefore, the disappointment is deeper than any other defeat can cause. Sanders described the Obama administration's #2, Joe Biden, who paved the way for Trump's walk to the presidency, as "a very decent man who I will work with to move our progressive ideas forward: standing united, we will go forward to defeat Donald Trump, the most dangerous president in modern American history”. Sanders suspended the campaign, announcing that he would support Biden, just as he did for Hillary Clinton in 2016.

This situation actually shows the boundaries of Sanders and Democratic Socialists in the USA, which have gained great popularity recently within the Democratic Party. We have seen many times that reformism, which has its riskless comfort-zone dependent on elections, has been in favor of regaining the stability of the order and eliminating dangers against the sysyem, especially in such periods when the course of history accelerates and the contradictions between classes peak. There is no need to talk more about Sanders' compromises with the current capitalist system. However, over the past 20 years, many variants of reformism have largely occupied the agenda of the working class, and without exception, almost all ended up with deep disappointment: in the early 2000s, in Latin America we have seen the examples of Chavez and Morales. Between 2003 and 2011, in Brazil, Lula Da Silva, a former union leader, took the Labor Party to power, and then Dilma Roussef held the office until she was overthrown in 2016 with a judiciary coup. However, these 14 years caused the same deep disappointment in Brazilian laborers. In 2010, the anger of the working classes in Greece, which rolled into a deep economic crisis, brought Syriza to power. The result is the same... In short, we can successfully set up a museum with the reformist political elements that lean on the legal instruments of the system, use the parliamentary processes, create the illusion that they can solve social contradictions without touching the existing order of private property and capitalist relations of production, and play the life-saving role in times of crisis.

More than a century has passed since Marx stated that the working class cannot take over the existing state apparatus as it is and use it for its own benefit. However, as with all his predictions about capitalism, Marx's conclusion remains entirely bright. One of Sanders' main contradictions lay here. Democratic Socialists had a naive optimism that a transformation or cleavage could be made within the Democratic Party, a device of American ruling classes, and that they could come to power despite the party establishment. However, let alone the dark history of the Democratic Party, almost a one-month pre-election process proved that this would not be possible. The strange on-goings of the first primary in Iowa; before the Super Tuesday (March 3), Pete Buttigieg and Amy Kloubuchar's withdrawal to render Biden, who outscored Sanders with the support of black voters on February 29 in South Carolina; intrigues of party elites such as Obama and Clinton; the funds transfer to other nominees revealed the desire of the rulers to prevent Sanders. In fact, a billionaire like Michael Bloomberg had entered the election race ‘just in case’. However, in the early stages of elections, Sanders took the race ahead during the period of candidate inflation, and quickly left Biden behind, that even Trump teased him as "sleepy Joe" whose image was rather faint and tame.

Sanders complained about the electoral apathy among youth, which has become his main supporter group throughout this process. In the article that we evaluated Super Tuesday, we had explained the details with data. Sanders' expectation was to increase the attention of youth in the process. But has he really struggled for it? Of course no!

Whereas, there was a heap of opportunities in front of Sanders, who might have come across very few leftist subjects in history. Just the chart below is enough to explain this. In the USA, where the Covid-19 outbreak peaked and made the USA the new center of the pandemic, the youth unemployment rate jumped from 7.7% to 10.3% in the previous month. That's not all. Only 6.6 million in the last week and 17 million in the last four weeks have applied for unemployment insurance, which is one of the main agenda of the US media nowadays and the ruling classes are already pointing out the danger, the bubbling at the bottom of the society. In many sectors, there are predictions that strikes and actions can spread. The political steps to be taken in such an extraordinary environment must also be extraordinary. Political leadership must make the energy of the masses a lever of its own political goals. Instead of this, Sanders expected for the youth and working classes to rely on an election system that does not allow new struggles to emerge. 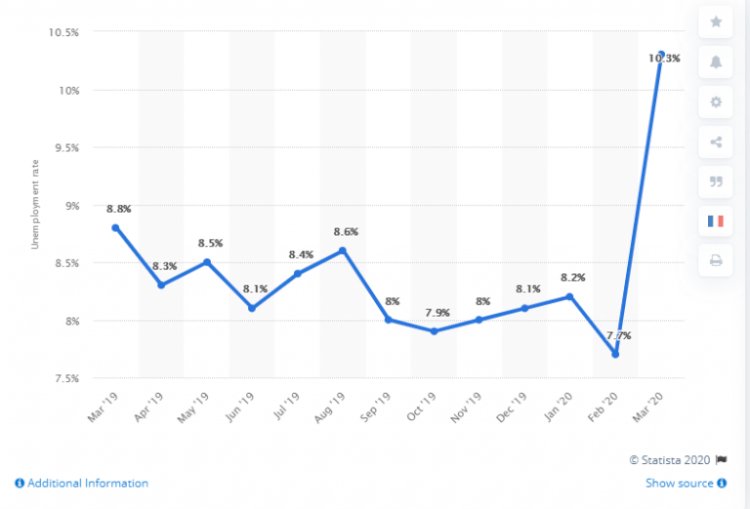 Simply put, Sanders’ "Medicare for all!" could have been the starting point for an effective campaign that mobilize the working class against current healthcare system that collapsed in the face of the epidemic, unable to provide almost the simplest protective health equipment. However, neither Sanders nor Democratic Socialists lean on the power of the street in such a way that they can create a social mobilization. This is the reason why Sanders could not maintain momentum even in the face of a low-profile competitor like Biden.
However, in media, especially JacobinMag, which is voice of Democratic Socialists, asserts that what is more important than Sanders' withdrawal is his popular campaign. However, it was a surrender without a fight. On top of that, there is no one-word statement about Sanders' support of decayed bourgeois politicians like Clinton and Biden!

Indeed, Trump is already expecting to face his weak opponent by rubbing his hands. “Bernie Sanders is OUT! Thank you to Elizabeth Warren. If not for her, Bernie would have won almost every state on Super Tuesday! This ended just like the Democrats & the DNC wanted, same as the Crooked Hillary fiasco. The Bernie people should come to the Republican Party, TRADE!” Given that Trump could not hide his joy, but it is obvious that Sanders' defeat will not only be limited with the defeat of himself.

The election of Sanders could both create around a world a new wave of excitement in behalf of left and accelerate the decline of authoritarian-right populist governments like Trump. But in the historical phase we are in, it is obvious that the working classes need more than partial gains. It can be seen with the Covid-19 outbreak that capitalism, whatever the way it functions, will drag humanity into an existential crisis. Moreover, the system can survive only by deepening inequalities, turning the world into a global war zone, pushing billions of people into the grip of hunger and misery. Socialism then becomes no more an ideal but an objective imperative more than ever.

Trotsky emphasizes that in the years of capitalist crisis, revolutionary processes and fascism of the 1930s, the historical crisis of humanity was reduced to the crisis of the revolutionary vanguard. Humanity is on the brink of a similar historical crisis and time is becoming too valuable to be lost with reformist dreams. Rather than hoping for reformist left options such as Chavez, Morales, Tsipras, Corbyn, Sanders, it's time to put forward a radical left option which adopts the working class struggle as a weapon and Marxism as a guide.