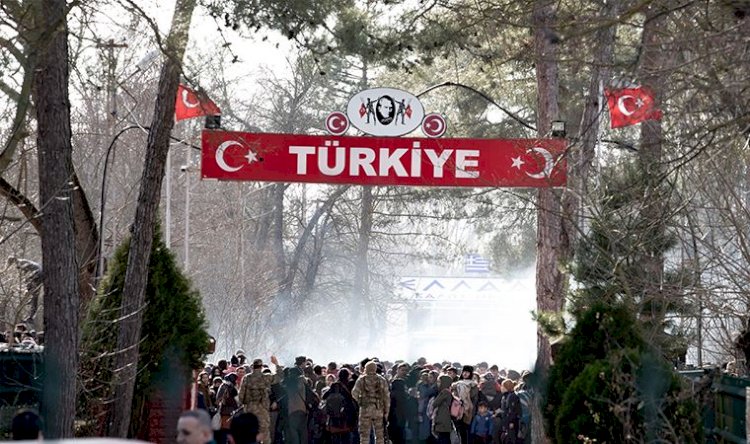 Since the beginning of the war, at least 7 million Syrians displaced. Today more than 3 million Syrians refugees are in Turkey. Erdogan regime is still violating Syria’s right to sovereignty and supporting jihadist gangs and fanning the flames of war. On the other hand, he uses Syrian refugees as a trump card to seek support of the EU as a pressure element on the balances in his Idlib adventure.

AKP government continues their crimes by sending thousands of poor migrants to the gates of Europe in order to cover its fiascos in the Syrian War and trying to benefit from the crisis. Also, they try to gather strength by creating anti-immigrant far-right atmosphere in Turkey.

After Erdogan announced that he would open the borders for the Syrian refugees to blackmail the EU, thousands of Syrians, Afghans, and Uzbek immigrants rushed into the Greece border. The AKP government sends refugees to Europe, allowing thousands to sail and face violence at the border in order to use their “trump card” effectively. European ruling classes, on the other hand, even used real bullets to stp the migrants. Greek police have been using pepper spray and water cannons for days. A refugee was murdered with a gunshot. Thousands are waiting at the borders to open and attempting to use dangerous ways to cross Europe.

In 2016, between Turkey and EU a “refugee deal” was made and EU undertook to give 3 billion Euros to Turkey. In other words, deplacement of thousands was just only a matter of money trade for them! Today, nothing has changed. Both EU and Turkey uses refugees as nothing but a “trump card” for their economic and political interests.

The life and future of refugees is not a political “trump card” and cannot be used for political gains.

Those who displaced millions of people with imperialist wars are the imperialist forces including Turkey and EU.

It is a crime against humanity to use refugees as “trump card” as well as to close the borders and force them to drown in the Mediterranean!

All foreign powers, including Turkish Armed Forces, must withdrawn from Syria. The imperialist and sub-imperialist policies must ended in the Middle East.

The EU which is one of the leading actors destroyed Syria, must immediately open the borders. The AKP government must hands off Syria and the refugees whose country have been destroyed by its agressive policies.

Turkish laborers should be aware that the refugees are the victims of the war and shoul reject scapegoating of refugees! Let’s not forget: Those who exploit us and refugees like slaves and push into misery and cause unemployment are not the immigrants but the bosses of this country.

As laborer peoples around the world, we have to fight against our dominant classes and destroy imperialism to stop millions of people being refugee all over the world.

The working class of the Middle East has no future other than destroying capitalism, imperialism and establishing a socialist Middle East!