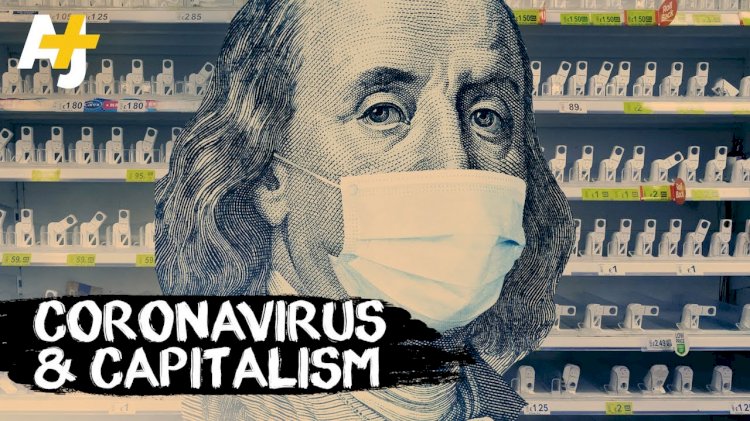 The Chernobyl disaster, which caused the USSR to be widely questioned and condemned from inside and outside, was one of the most memorable events of modern times. The Coronavirus disaster today will also lead to the questioning and condemning of capitalism.

In 1986, the first reaction of the bureaucrats in Moscow in the face of explosion in Chernobyl was to try hiding it and then to show it as insignificant. But at some point, this would not be possible. The radioactive fallout was so great that radiation-laden clouds even reached the Western European countries that an urgent evacuation of hundreds of thousands of people in Ukraine was necessary. As a result, Moscow accepted the situation. The political fiasco that arose as a result of the incident was also enormous. Chernobyl had clearly demonstrated that the system in the USSR was worn out, poorly governed and most importantly, it was a police regime that did not value human life at all. The legitimacy of the USSR, which was already in crisis, has been hit hard inside and outside. The Chernobyl disaster, of course, has made an important contribution to the decidedness of the Stalinist bureaucrats at the top of the USSR, especially Gorbachev, about radical change. As a matter of fact, the disaster in Chernobyl accelerated the dissolution of the USSR. Although the system in the USSR had nothing to do with communism, even today, Chernobyl continues to be used as a symbol of the failure of communism.

34 years passed and now humanity faces an unforgettable disaster again. The rulers of the world voice the deaths of hundreds of thousands of people with peace of mind. What is happening today has important similarities with Chernobyl and points to the very radical problems caused by the capitalist mechanism. Just as Chernobyl is the fiasco of the state capitalist system in the USSR, the Coronavirus outbreak is a similar and even bigger fiasco of todays’ capitalism. As follows:

1. The starting point of the epidemic was China, where labor exploitation is the most intense in the world, and the rulers concealed the existence and seriousness of the epidemic from their own people and the world public opinion in the first place. The reason was to prevent the capitalist operation from taking a knock. However, if the issue had been shared with the world public opinion early enough, the outbreak would have been prevented from going out of control.

2. Not only China, but capitalist leaders from Trump to Putin, Boris Johnson to Khamenei and Erdogan, tried to indicate the epidemic trivial so that the capitalist economy would not be affected. They spent vital weeks flagrantly without taking the necessary precautions, and as a result, the epidemic turned into a mass human massacre.

3.Capitalist governments made incredible mistakes amid the epidemic and managed the process incredibly bad. Even at a time when the outbreak was massive, matches continued with the pressure of the football industry. Football matches became one of the main effect in the explosion of the epidemic in Italy and Spain. Likewise, while the virus was transported to all parts of the world by plane, the flights continued until it became uncontrollable, so that the tourism and transportation sectors were not affected. Many more examples can be given…

4.The health systems of the countries could not respond to the epidemic as public health services were smashed by the neoliberal cuts that the capitalist governments have been implementing for many years. There was neither the required number of beds nor the intensive care unit in the hospitals… From the simplest to the most urgent, there were no necessary medical equipment, life-saving technological devices such as ventilators, and sufficient healthcare professionals. Health workers who tried to prevent disaster without adequate protection were sacrificed just like the workers in Chernobyl.

5.Since preventive actions are not profitable for private medicine and health monopolies, humanity was caught completely unprepared for the corona epidemic. Whereas, they could learn from the old experiences of the SARS and MERS outbreaks. A range of life-saving improvements could have been made, from the prevention of the outbreak to the development of vaccines and other medicines. But preventive healthcare does not make any sense, as every patient is a “score” for pharmaceutical companies whose main purpose is just to make profit. After all, preventive health services reduce the number of “customers.” While the stock markets collapsed all over the world after the global epidemic, pharmaceutical companies' shares broke records in the stock market terribly related to the pandemic.

6. While the global epidemic requires international division of labor, planning and coordination, the capitalist system was unable to coordinate even companies for critical weeks. The leading and wealthiest countries of the EU such as Germany only watched how Italy and Spain struggled with the deadly epidemic. Let alone collaboration or planning, the imperialist competition further aggravated human massacre as we have seen that embargo imposed on Iran caused dramatically high numbers of casualties. When the outbreak crisis seemed uncontrollable in China, the bigoted Trump seemed very happy with this.

7.Overcrowded metropolitans, where tens of millions of poor people live, are completely vulnerable to this type of deadly outbreaks. Bombay, Tehran, Sao Paolo, Mexico City, Istanbul, Lagos… In such cities, you can find neither social distance nor necessary hygiene or necessary health services. We can see an example of this in "advanced" New York: with its tens of millions of homeless people living below the poverty line and not having access to healthcare. The United States exemplifies well enough the capitalist system as the leader and richest country of the capitalist world.

8.Capitalist economy is also a completely big fiasco in the face of such a pandemic. While billions of laborers create enormous wealth around the world, the global system does not have any preparation for the epidemic. On the contrary, capitalism was already dragging into a major economic crisis, and then things got out of hand with the pandemic. While hundreds of millions of working people around the world are losing their jobs and starving to death, bourgeois states put all their efforts to save the sinking monopolies. This major contradiction will be more severe in the coming months.

The coronavirus pandemic will convince hundreds of millions of people that capitalism is not working. More and more people will be questioning the system. In parallel, ideas that ‘socialism is a much better system for the interests of societies’ will become more widespread. However, here we come to the limits of the Chernobyl analogy. The free market was an obvious choice as an alternative to state capitalism in the USSR. Indeed, the Stalinist bureaucrats destroyed the USSR with the least possible damage and became new leaders and new elites of the newly established capitalist states.

But such a smooth transition is not possible. Socialism, an alternative to capitalism, can only be reached through a revolution. This requires the riots of the working classes, a strong class-consciousness and revolutionary Marxist parties that will lead all these processes. We can expect worker rebellions to erupt as the global epidemic slows down. As a matter of fact, workers and young people have already started performing the rehearsal of uprising against the system in Lebanon. Anxiety and distress prevail in the castles of the masters of the imperialist capitalist system. This period will also be a time that class-consciousness will progress and the building of revolutionary Marxist parties accelerate. Let's not forget that the defeat of capitalism will never be spontaneous. The intervention of organized revolutionary elements in history is a must for socialism which is the only real transformation.