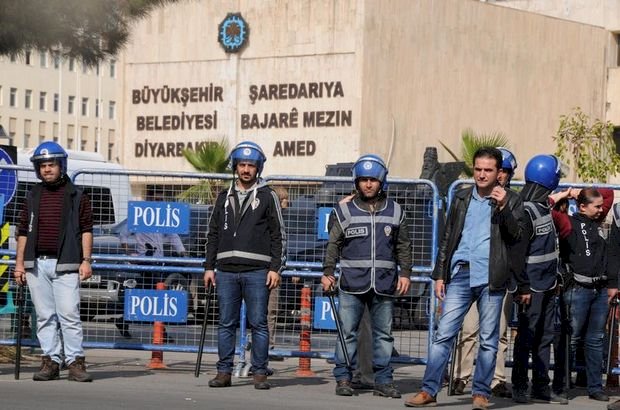 Turkey is in a midst of the fire in recent days. On the one hand, the Ministry of Interior appoints trustees to the municipalities of Diyarbakır, Van and Mardin, which were Kurdish cities won by the HDP in the March 31 elections. State’s brutal violence tries to oppress the protests against “the trustee coup”. Yesterday in Van, when a Kurdish disabled person was lynched  by poliçe and taken into custody. The hostility of Turkish state towards Kurds shows itself on the Street and in the politics once again! HDP MPs were also exposed to poliçe violence while defending their municipalities on the Street.  During the protets,more than 400 people were detained, including HDP leaders and members.

On the other hand, this move of the AKP government is part of the preparations for the war in Rojava. The AKP, which has been conducting negotiations with the US on the eastern side of the Afrin has already started to suppress the opposition within the country. As Erdoğan wants to stop the Kurdish people’s political hegemony in the region by the police operations and the intensified state pressure  it can easily be foreseen that the single-man regime will not stay there and will try to expand the pressure towards all social groups opposed to it as it was in the past.

Is the opposition parties ready to resist this process? In the western part of the country, the trustee coup caused an anger as it is a clearly illgetimate attack of Erdoğan to Kurdish people to streghten his power. Thus, for Erdoğan, convincing the Turks to this coup is stemmed from the mayor’s so called “terrorist activities” is hard.  Because there is a general fear that the AKP will not stop here and will expand the wave of operations towards large cities such as Istanbul, Ankara and Izmir. But it should be seen that the reactions on social media cannot stop this attacks. While HDP is the main actor of street mobilizations, this allows the state to increase the dosage of violence. CHP is not on the street but only gives support in high level politics. Regime isolates Kurdish people and its politicans thanks to nationalist prejudices. Social opposition and especially social democratic laborers should not leave the Kurdish people alone if they want to prevent intensifiying oppression and to take a sigh of relief.
The question of oppression is not only a problem of the Kurdish people or socialists. These people have been oppressed for decades. The same stick goes down to the head of the laborer on the street demanding a livable wages against economic crisis, inflation and increasing unemployment. However, the social-democratic laborers have to stop one step ahead of their leaders. In fact, there is no guarantee that even the resistance of the power in the İda Mountains under the pretext of war will not be attacked by criminalizing by the government. The wave of repression and arrestments during Operation Afrin should not be forgotten.

It should not be forgotten that the CHP arm-in-arm with the AKP government when the issue is Kurdish as ve have seen many times in the past.  Kılıçdaroğlu’s “i disagree with taking streets to protest” trustee coup. To him, the only being critical to the attacks against Kurds by words is enough! They think that they can fight an  authoritarian regime only words!