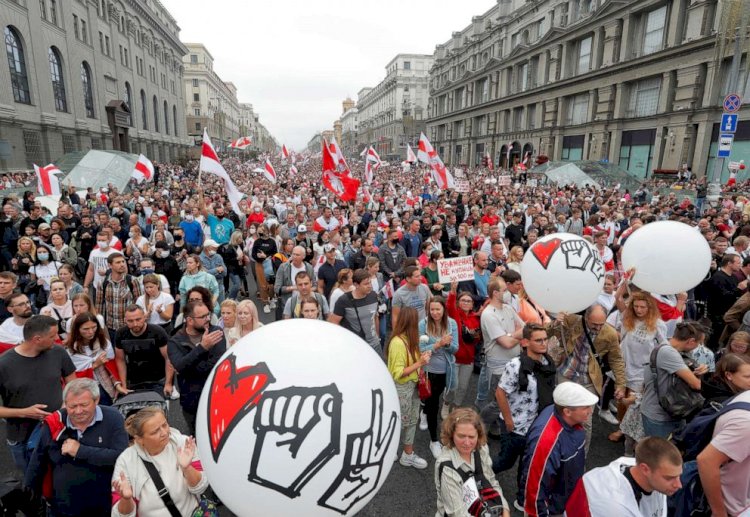 The actions that started after the elections in Belarus on August 9, is one of the hottest topic of world politics. These protests led to many discussions also in Turkey, especially on social media. What is not surprising about these discussions on social media and various web sites is the fact that people are confused about the characteristics of the protests especially the ones who calls themselves as socialist has a clear tendency to see the protest as the imperialist intervention. Lukashenko is the president of Belarus and a Putin-backed up dictator since the dissolution of the USSR. For years, the main agents of the Belarusian opposition are pro-US/EU agents trying to pull the country from one imperialist pole to the other. However, when we take a look at the mass protests; such “imperialism-sponsored protests” is not the reality. The ones who describe the protests as an imperialist game take sides prefer Russian imperialism, either publicly or implicitly, over US imperialism. These anti-dialectic political analysis over these just create confusion about the real dynamics and the characteristics of the protest wave. We do not need conspiracy theories, we have to see the things as it is to have a revolutionary political program. In that, the mass participation of people to the demonstrations proves people’s anger. If we take into consideration the fact that there is no real political alternative capable to lead and control these actions and  react the police violence, we better understand the extent of the amassed anger that make them confront any kind of oppression.

From ’94 to Today: Aleksandr Lukaşenko, Belarus and Mass Actions

Belarus is a country that has experienced continuous parliamentary crises and massive actions since Lukaşenko came to power.  Firstly, it is worth noting that the presidential elections in Belarus take place in two rounds and perhaps it is the country in the world where political parties have the least influence in the parliament. To illustrate, in the last parliamentary election, in 2019, 89 out of total 110 seats were won by the independent candidates. In addition, Lukashenko, who has also been an independent for years, is someone who won all the elections in the first round with more than 75%, except for the 94 election in which he first came to power. He also gave signals about how he would govern the country during his first term. Since he came to the power, Belarus has held a referendum on many issues; but perhaps the most important of these was the referendum held in 1995 by Lukashenko. This referendum gave signals about the future political feature of Belarus. One of four clauses voted in this referendum was president’s power to dissolve the parliament. Also, as a noteworthy detail, the referendum and the parliamentary elections would be on the same day. 19 BPF (Belarusian Popular Front- Center Right) deputies who went on a hunger strike to protest the president’s holding a referendum without the parliament’s approval were detained with torture in parliament. In another referendum held in 1996, there were again parliamentary crises and massive actions took place across the country. In order to be a candidate in 2004, Lukashenko held a referendum once again. As it is seen; there were transparency issues and claims of intrigue and irregularity in all elections held in the country, including the last one.

Unlike many examples we have seen after the dissolution of the USSR, Lukashenko is a figure who tried to protect the social state at some point. But it is worth noting that, along with many economic crises in Belarus, he sought help from IMF and EU in 2008. He has re-established relations with IMF and the World Bank in the recent years. But because he did not accept all the demands, he was able to get much less loan than he wanted. Relations started to break off after Putin wanted to take the ropes and openly called for Belarus to unite with Russia. Lukashenko turned to Europe for help in order to rebalance its polar politics relations. He warned Russia with these words: “If Russia ever tries to violate our sovereignty, you all know how the world public opinion will respond; we might be drawn into a war. The West and NATO will not tolerate this either. Because they will regard it as a treat to themselves, which they would be right about.”

On the other hand, Europe’s problems with Lukashenko are not only limited to democracy and etc., the billions of dollars they would earn in Belarus, which has not adapted to neo-liberalism, whet their appetite and Lukashenko draws the boundaries at that point. For this reason, they got closer to Putin again. This is the reason for the claims on many news portals and social media that the actions are funded by EU, indeed, organized by them.

Actions Taken After the Elections and Results

Siarhei Tsikhanouski, who was a candidate for the presidency before the elections on August 9, was arrested 2 days after he announced his candidacy, and then his wife Sviatlana Tsikhanouskaya nominated instead him. Siarhei Tsikhanouski, a night club owner who was not a political figure, opened a YouTube channel after a bureaucratic obstacle he encountered in 2019 and started to talk about these. And then he started to voice the stories of people facing such problems by travelling all around Belarus with his car on which Real News written. His channel quickly gained popularity in Belarus as it became politicized against Lukashenko. Considering that the media is completely under Lukashenko’s control, after this channel became popular, Siarhei Tsikhanouski was watched closely and exposed to threats. With Lukashenko winning the first round with 80%, Sviatlana claimed that was rigged poll and demanded the elections to be held again. That way, the actions started.

The ongoing actions remain massive despite the violent police brutality from the very beginning. Nearly ten thousand people were detained with torture, the regret videos of the detained activists were serially broadcasted on TV channels, all media and Lukashenko constantly did defamatory campaign towards the actions; but all these have been of no use. Despite everything, tens of thousands of people participated in the actions took place on August 16. Last week, strikes began in some workplaces and the workers of the Belarusian state television went on strike stating that they could no longer bear the fabricated news.

Are the actions organized by the EU, as had been said? First of all, it should be stated that before the elections, Lukashenko arrested 33 employees (mercenaries) of the private military company Wagner which is Russia centered on account of the fact that they would mingle with the elections. He did this in order to preserve its balance politics between the imperialist powers. Yet, after the mass actions he faced, he again relied on Putin.

The notion of the Turkish left that the USA-EU blocs are omnipotent is also the main focus of these discussions. As mentioned earlier in this article, all political agents in Belarus are weak. Lukashenko, who has been in power since 1994, controls every areas of the state. Therefore, the USA- EU does not have the power to organize the actions in the country, even if they want to. But, of course the demands and course of the actions suit their book. Hence, they support; but the claims that they organize the actions can only be the product of a mindset prone to conspiracy theories. The wing supporting Russian imperialism either publicly or implicitly puts forward some photos with USA flags among the hundreds of action photographs to support this claim. However, although tens of thousands of people have been protesting the Lukashenko regime for days, the 90 % of these people are independent Belarusians. In addition, it is obvious that people said enough and the actions are the product of an explosion of anger rather than being organized due to the weakness of the political agents that is mentioned above, the independence of the participants in the actions and the lack of a clear political program for the activists.

Lukashenko is a Putin-backed up dictator who can do anything to keep his seat. But the subjects of the opposition in front of the rebelling people are also pro-USA/EU. As I mentioned before, it is not a revolutionary attitude to develop a stance about the mass movements. Skeptical understanding always seeks a big imperialist force behind the curtain. Revolutionaries never choose one side among the imperialist powers and never become their supporters. But unfortunately, the discussions are not healthy enough to discuss the case with a revolutionary content. An important pole of the debate supports for Russian imperialism either publicly or implicitly on this issue, just like some had done in the S-400 Russian weapons discussions in Turkey. This distorted understanding of imperialism and Marxism stemming from Stalinism is a product of the Turkish Left’s decline over the years. The task of the revolutionaries is build the political subject who will wipe out the imperialist forces from the whole world.

Therefore, it is essential for us to put aside that what is historically needed is the revolutionary socialist struggle of the Belarusian workers who only trust in their own power.  All other attitudes do nothing but poison people’s consciousness.

What Will the Actions Evolve?

As all countries established after the collapse of the USSR, revolutionary parties have been very weak in Belarus. After all, the character of the protests did not change despite the intense police brutality. The movement is politically weak and still directionless. It doesn’t have a program. Therefore, it seems that the actions will not be able to overthrow Lukashenko, who is pulling the strings in every aspect of the state and who has Putin’s support behind him. Even though Lukashenko took a step back stating that if the constitution changes, he can renew the elections; he didn’t tell anything about the content of the constitution to be changed. Consequently, it is not difficult to guess that he will want an electoral law and constitution that will protect him even more.