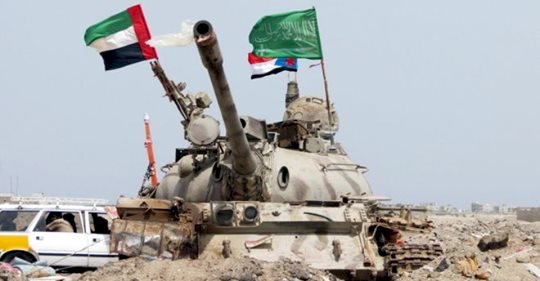 There have been significant changes in the balance of powers in the Middle East in the last ten to fifteen years. During this time, Iran and Russia made important strides in their positions. In 2003, the US overthrew Saddam and did Iran a great favor. Then, in 2006, Hezbollah’s success to stop the Israeli occupation in Lebanon was an important indicator of these changing positions. With Syrian Civil War began in 2011, Russia has not only returned to the Middle East as a playmaker, it also regenerated its weapon industry, pull Turkey to  its  periphery again and became a superpower again. The pro-Iranian militias, especially Hezbollah, played a decisive role in the Syrian Civil War and greatly improved its military capacity. Hashdi Shabi, which was established with popular support after in 2014 when ISIS threatened Baghdad, became an important trump card of Iran. The Yemen civil war that started in 2015 turned into a great victory for Iran with the Saudis were vanquished by the Houthi forces.
In addition, Iran has proved to be a breakthrough in military technology. In 2011, the US drone, which violated Iran’s airspace, managed to bring down the RQ-170 undamaged. After this time, Iran has made strides in drone technology and started to give this ability with the armed groups that it has been supporting that is changing the traditional war balances now. With this ability, the Houthis started to attack Saudis’ in their own land. The attacks to Aramco, the world’s largest oil refinery, have been a turning point. The fact that the tens of billions of dollars of air defense systems sold by the US to the Saudis is useless shows that nothing will be the same in military balances. With drones and a new generation of missile technology, Iran’s allies in the field have become more dangerous than ever.

A Change in Compositions of the Forces

The Middle East is described as a ball of conflicts that are shaped around very complex relations and parties. However, in the historical period we are going through, the parties are seemed to be shaped on a much simple ground: Iran on one side and the US-Israel-Saudi bloc on the other. Syria, Lebanon, Palestine, Yemen and Iraq are either in large-scale wars or on the brink of possible war. On the contrary, to the discussions on the US can hit the strategic facilities in Iran and even declare a total war, the fact that Iran’s counterattack capabilities have jumped in recent years, intimidates its enemies.
Although we call the US-Israel-Saudi bloc, we did not use the term Iran-Russia bloc, because the relations between Iran and Russia contain important contradictions. While Iran fights against the US-Israel-Saud in all region, Russia is only on the Syrian front. Moreover, Putin does not welcome the hegemony of Iran in Syria even Russia does it block any Israeli airstrikes against Iran and its allies in Syria. Unlike Iran, Russia has no anti-Israel policy, and pays attention to maintain relations with Israel.
It was remarkable that in August the pro-Iranian Hezbollah and other Shiite militia forces did not participate in the operations that the Syrian Army cleared the Khan Sheikh Sheikh from Islamists. Because, without the support of Hezbollah and other Shiite militias, the striking force in the field, the operations are prolonged and the casualties are increasing. Moreover, as a result of Putin’s negotiations with Erdogan, the progress of the Syrian Army is halted. Moreover, the intervention to set the scene for a new occupation of Turkish army in Syria is not something that Iran will enjoy.
Moreover, after the recent sanctions, Iran’s oil exports fell significantly and the economic crisis deepened even further. Because of this, after the reduction of Iran aid provided to Syria, the Syrian civil war experienced the most important economic difficulties. Extending fuel lines are known to cause serious unpopularity, while the aid of Putin, who cut the bill of every aid it provided to Damascus, has recently increased the monopoly in Syria. Some recent developments might remind Damascus how important the Iranian support is: after the Iranian tanker, which transports oil to Syria, was detained several times in the Mediterranean, Iran retaliated in Persian Gulf and the tanker barely reached Damascus.

The Exceeded Limits of a Proxy War

Everyone knows that Israel and Saudi have long wanted a US operation against Iran. Over the past year, the waters of the Persian Gulf have been heated several times: a US $ 400 million drone was shot down and ships were bombed in the Persian Gulf. After Syria, there were attacks on Iran and its allied militias in Iraq and to retaliate, Hezbollah carried out a successful attack in Israel. On the other hand, Israel aims to destroy Palestine with a plan called the Treaty of the Century by signing an agreement with Trump. That is why Palestine is ready to catch fire. It is none other than Iran that provides military and economic support to Palestinian groups and the only Sunni supporters of Iran are Palestinians in the grip of Israel.
In the Middle East, it is called a proxy war, but it is past that point because the attacks on Iran and its allies are directly signed by the US and Israel. Because the US-Israel-Saudi front does not have strong allies in the field except the YPG. That is why they have to carry out the attacks themselves.
For Iran, the situation is very different. The Syrian state headed by Assad, Hezbollah, Hashdi Shabi, the Houthis and Palestinian groups, as enormous military allies, make Iran a deterrence force  . Apart from these, Iran has a significant sociological influence on the Shiite population in Afghanistan, Bahrain, Saudi Arabia and even Azerbaijan.

The Situation in Rojava

The situation in Rojava is determined around these new camps. The Kurdish National Movement is clearly on the US side in these divisions. The Syrian Democratic Forces (SDF) estimates that as long as US support them, they can keep their liberated area in their hands. These regions extend beyond the regions, where Kurdish population is the majority, includes the regions such as Deir ez-Zor and Raqqa. The oil basins in the Deyr ez-Zor are under the control of the YPG and the Syrian Army’s moves towards it were severely punished by the US. The economic crisis of the Assad state, due to loss of the oil sources, is getting worse. The Shiite militia forces on the other side of the Euphrates, just across the oil fields, are regularly bombed by the US and Israel. It is known that the drones of Israel, who is advanced in drone technology, take off from SDF regions. Moreover, the Saudis are strengthening their ties with Syrian Kurdistan and consolidating their presence in the region.
Because of the fact that the US protects the SDF region, Turkey and the US have problems. This brings Turkey closer to Russian bloc in Middle East balances. SDF’s efforts on establishing a Kurdish autonomous region like the Northern Iraq is a red line for the Turkish state, not only for the AKP. The political difference of the AKP in this regard is that it wants to protect the Islamists in Idlib and refuses any collaboration with Assad.
The United States, on the other hand, keeps supporting as the SDF which is the only ally force of it. The US is well aware that exclusion of SDF would be a great victory for Assad, Iran and Russia as well as Turkey. In such case, Iran-Iraq-Syria-Lebanon-Palestine bloc would strengthen, Israel would be imperiled, and the US would have an absolute defeat. On the other hand, the US steers a middle course to answer the intense objections of AKP. Although the AKP’s “unilateral action” bluff seem to be in vain, it is seems that the US may open more areas to the Turkish Armed Forces in Syria. After all, the ground under the SDF’s feet is quite slippery. Two years ago, we witnessed how the US ally, Barzani, was left alone and how critical gains of Kurds had evaporated. In short, there is no need to go far and or too back to take lessons from the policies of the United States.

How should revolutionary workers’ movement in Turkey take a position about the Middle East?
It is our primary importance to oppose the attacks on Iran, Syria and Yemen. And it is necessary to expose the real face of the liberal left, which has been keeping its silence.
On the other hand, it is necessary to be in solidarity with the workers’ movement fighting against the capitalist mullahs in Iran. The strengthening of the leftist movements that struggle in the axis of independent class politics in Iran will be of historical importance.
The right to self-determination of the Kurds in Syria should be defended. We should fight against the nationalist aggression that does not give Kurds the right to life but our support to the Kurdish movement should be a critical support.
These positions, which seem to be contradictory to each other, actually refer to the unity of our tactics with anti-imperialism, internationalism and independent class position.