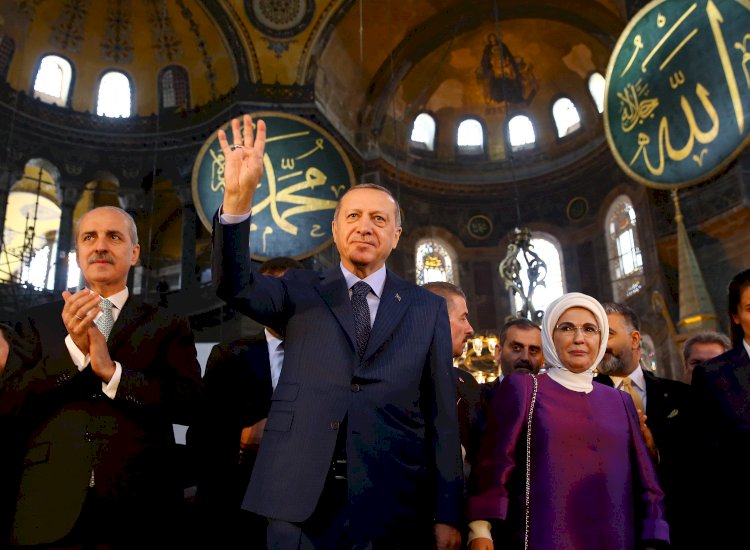 Secular sectors of the society in Turkey spent almost their entire life in fear. At least for 30 years they are anxious because they think that “Sharia is coming.” This case shows us that the left (and socialists) failed and could not be an alternative in Turkey.
Left actors have long pursued politics through identity-culture policies and polarizations, rather than class struggle. As a result, the left politics has been largely lost meaning.

The self-confidence of the AKP stems from these realities. If the left makes politics through the divisions between  identities [such as sects (Alevi-Sunni), ethnicity (Kurd-Turk) etc.], it will be a suicide. That's what we've been the case. An example of this was the policies that followed through secularism-centered politics that developed when the class movement was quite strong in the 1990s. We see that leftist- republicans who think they are communists are still pursuing the same politics.

The CHP, on the other hand, has abandoned its old politics after many electoral defeats. But what CHP replace it is a barren liberalism. As a result of this amorphous moderate political line became the ground for the block of CHP-IYI Parti- Saadet Partisi- HDP- Deva Partisi*  . But despite groundshaking economic crisis, this allience could not accelerate the dissolution of AKP. Moreover, and most importantly, (the reason for the slow dissolution of the AKP), the opposition allience  does not offer the laborers and the youth anything but "bourgeois normalization.” Moreover, “amorphous moderation”, their main strategy, is unable to create serious agendas. That's AKP is the one who always take the advantages as we have seen in Hagia Sophia.

However, there was obvious optimism recently:

All of these made people believe an optimist scenario that Turkey will get rid of AKP and Erdoğan in next elections. The petty bourgeois individualistic conformism coincided well with these optimistic expectations. “Let's wait until the elections, all we have to do is just voting …”

But AKP's last Hagia Sophia move has routed this optimism. The President of the Religious Affairs made a curse to Mustafa Kemal with a sword in his hand and fundamentalist Islamist crowds pured into streets to celebrate Hagia Sophia. That scene turned the fear into panic of the revival of Caliphate

What are the facts?

Seeing the problem smaller than it really is can be as harmful as panicking. It is obvious that the AKP has been building an authoritarian and conservative one-man regime for a long time. The bourgeois state is largely under the absolute control of the AKP. It is obvious that AKP will not want to leave power easily. They will continue to advance towards enhancing authoritarianism, frightening the people, silencing opposition and escalating cultural polarization while doing all this. The last performance is obvious: dividing Bar  Association to weaken the opposition of the lawyers, the social media censorship law, debates on withdraw from the Istanbul Convention…
It would not be surprising to revoke the license of opposition channels such as Halk TV, Tele 1, Fox Tv. If it does, it will be one of the last nails in the coffin of bourgeois democracy and it would be an important breaking point. As the effects of the economic crisis get worse, AKP's tolerance for all kinds of outlier sounds decreases. Islamists has lost all its political motivation and cause and became a group of robbery. Therefore, the AKP is losing the support of the youth. The AKP's forceful conservatization backfires. Religious schools are empty, religious life style is losing popularity.

The result is obvious. AKP is not likely to soften. To leave power, they had no choice but to brute force and they will not hesitate to use it that is also the fact for the Islamist regimes in the world. Authoritarianization will continue, but Erdoğan will not declare the Caliphate today or tomorrow. Because they do not need it, because their style that progresses step by step is not compatible with such sharp turns. Because they do not like to take risks and flow into uncertainty. Moves such as declaration of the Caliphate can disable the electoral system, make the masses take the street, and if this happens, CHP may have to manage the pressure from the bottom. And if the AKP oppresses the streets, parliamentary politics in Turkey may be finished.  Beside some other possibile risks, imbalances, and the fragility in the system, Erdoğan will have no different from Sisi. After realizing that he would be defeated, he will not put himself in the position of a dictator, who spill blood after seeing the defeat of his coup and cancel elections.  AKP would wish to continue its power as a party which holds the central state apparatus, keeps its position a playmaker legitimate ruling party.Let's not forget, Erdogan is still holding the strings and there are multiple options in front of him. Many hope that the AKP-MHP block will crack. But Erdogan will continue to focus on the contradictions of the opposition bloc and will take provocative steps in this direction. Erdoğan needs at least 50% to be elected again. But it seems that it is not possible for now. That’s why they need a solution to save themselves. One of the possible solution is to changing the system again. They may say, “Turkey could not understood presidential system, we are going back to the parliamentary system." Thus, the AKP-MHP block will not need 50%  and 40-45% will be enough for them. Rather than anticipating the future, we would like to tell you that AKP still holds many devices with these examples.

On the other hand, we should not doubt that AKP will try to make other provocative moves, as in Hagia Sophia, to stop the loss of voter support, to take the attention from the economic crisis and to squeeze the bourgeois opposition parties. AKP cannot allow softening of identity-culture polarization that the bourgeois opposition has no policy to overcome. Only class politics can stop this.

*IYI Parti: a centrist-nationalist party,seperation from the fascist party, MHP.