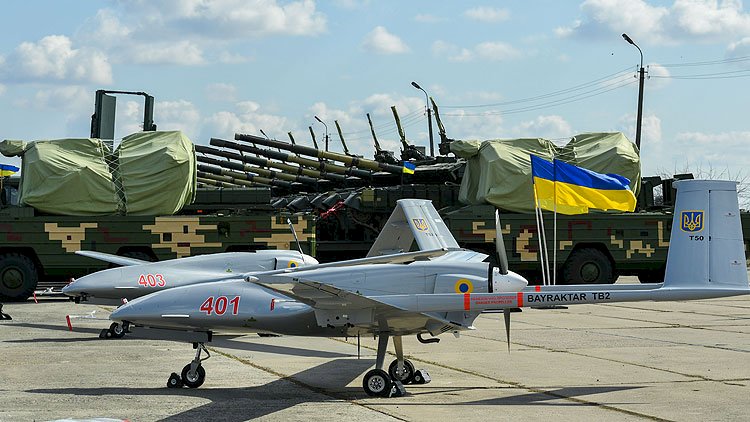 Haluk Bayraktar, CEO of Baykar Company, which manufactures "Bayraktar TB2" unmanned aerial vehicles, recently went to Ukraine. It is certain that all the imperialist powers were interested in this visit, since the issue is not an ordinary arms sale. As clear as black and white, Ukraine is preparing to declare war and the biggest support comes from Turkey.

Donbass, the homeland of Don Cossacks in eastern Ukraine, which we know from Sholokhov's novels, came under the control of the pro-Russian in 2014. Even though the Kiev administration fought, they were unsuccessful against separatists and could not to do anything for Crimea, which Russia officially annexed to its territory.

However, after the Karabakh War, there is a unique excitement in all nationalist Ukrainians and by the way, the government led by Volodymyr Zelensky. Last year, Ukraine purchased six TB2s from Turkey and ordered 48 more of them. The aim is to change military balance with TB2s. There is no doubt that the TB2s are tempting Kiev, since they determined the fates of countries in all three wars they were used in 2020.

These three battles proved that advanced drone models reached a level of efficiency that will determine the outcome of small-scale battles. It was seen that air defense systems, which are quite expensive, are inadequate against drones that can operate at high and low altitudes, supported by electronic warfare equipment. As a result, the party that was vulnerable to airstrikes suffered heavy losses; the losses of equipment, convoys, and military personnel prepared defeat for them.

These successes of TB2 increased the demand for it. Ukraine ranks number one. Haluk Bayraktar is on the one hand making sales in Odessa and on the other hand planning the training of the personnel who will use them.

While Kiev dreams of breaking the defense in Donbass with the drone factor, alarm bells are ringing in Moscow (just like in Athens). Russian defense companies, which lag behind their competitors in drone technology, are racing against time to produce TB2's counterparts. Orion¹, which made its first missile test at the end of December, is considered as a turning point in drone development on behalf of Russia. The arms industry giant Russia is also working hard to develop air defense systems that will be effective against drones. Russia's leap in drone attack and defense technologies could end Turkey’s relative military and psychological superiority, and this is expected to change the balances in Syria and Libya. Not only Russia, but all states with expertise in military technology are making great efforts to develop drone and anti-drone technologies. In general, the decisiveness of unmanned aerial and land vehicles in wars will increase and preparations are made accordingly.

On the other hand, Ukraine's purchase of large numbers of TB2 poses an immediate danger for Russia. It is obvious that those in Kiev are preparing for war, but whether they will take this into consideration in 2021, time will tell.

The USA, which sends warships to the Black Sea, undoubtedly intends to encourage Kiev. On the other hand, if Ukraine trusts the West once again, it may go further and fare worse. The same goes for Turkey. Russia-Turkey conflict in Syria and Libya could somehow be managed if the US were not involved. Even though Erdogan’s intervention in Karabakh bothered Putin, Russia managed the situation as the big brother without the USA’s existence. However, Putin will not keep silent while Russia receives a blow in the Black Sea, Donbass and Crimea as the US comes into play. Russia has a lot of options for a counter move. For instance, the prevention of millions of Russian tourists visiting Turkey each year will be enough to make the AKP cry. Let alone the issues of Syria, Libya, Kurdistan, Greece, natural gas, etc.

Its meaning for the AKP

First of all, TB2 sales mean money for AKP. TB2s are one of the most ambitious weapons in the growing drone market. AKP’s aim of $10 billion arms sales in 3 years is quite disputed but it is a reality that Turkey’s arms exports are growing. On the other hand, the AKP's regional ambitions point to much more than economic income. The sale of TB2s is an important part of deepening relations with Ukraine. AKP administration intends to become Ukraine's big brother. This intention is also associated with historical ties between the Ottomans and Crimea. As is known, there is no end to the AKP's sub-imperialist ambitions. Apart from that, there is also a part of the issue related to domestic politics. Declining step by step due to economic problems and mismanagement, the AKP tries to consolidate the right-wing voters with external tensions and sub-imperialist victories that provoke nationalism. And of course, tension with Russia means rapprochement with the USA. Unlike Trump, the Biden administration, which is not expected to get along with Russia, is already bothering with Putin by sending warships loaded with missiles to the Black Sea. Therefore, the Ukraine case may be an opportunity for a reaffiliation with the USA.

Is the Affair Limited with Drones?

As preparing for a war in Donbas, Ukraine is trying to modernize its predecessor army from the USSR. Ukraine is also trying to join NATO and the biggest support comes from Turkey. As a result of the agreements made with Aselsan (the biggest defense electronics company owned by Turkish Armed Forces Foundation), two countries cooperate on military communication systems. Ukraine wants to cope with Russia in the Black Sea. As Ukraine buys Corvette warships from Turkey, two countries cooperate in the fields of engine construction, shipbuilding, guided missiles and radio-frequency systems.²

Is the support of the AKP government to Kiev limited to the purchase and sale of weapons? There are some claims about this. Accordingly, consultants belonging to the TAF also assist the Ukrainian army in strategic planning. During the Karabakh War, special operations units of the Azerbaijani army stood out as a critical factor in advancing from the land. It is very important for the Donbass war to train motivated elite units in the Ukrainian army.

A great arms race started due to the changing balances in wars. While states are rushing to produce or buy drone technology, they are rushing to develop air defense systems to stop drones and to purchase the latest technologies. Apart from that, conventional war equipment is also purchased at full speed. Greece has increased its military spending by five times in 2021. The Greek army is preparing to incorporate 18 Mirage-type warplanes, 4 frigates and different types of military equipment. Turkey gave $2.5 billion for S-400s and preparing to purchase six submarines from Germany, while the other competitors in the region are rapidly arming. According to the report published by the Stockholm International Peace Research Institute (SIPRI) in March 2019, Egypt ranks third in the world in terms of purchasing weapons, after Saudi Arabia and India.3

Greece, Egypt, Russia, Turkey and Ukraine... While the ruling classes of these countries, whose peoples are getting poorer, are fueling wars, armament and nationalism, they also attack the rights of the working people and try to crush the opposition with an iron fist. It is up to us revolutionary Marxists to keep the working classes alert to the poisonous lure of militarism and chauvinism.