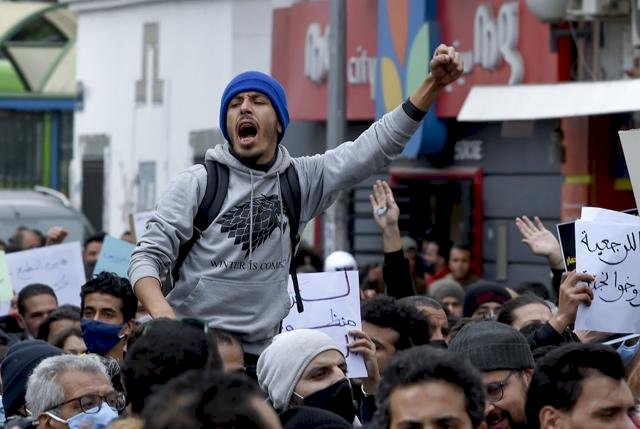 Tunisia, which was regarded as an exception to success in the Arab Spring, is once again shaken by protests after 10 years. Tunisia is the proof that laborers will not prosper unless capitalist exploitation is over, and that there is no other alternative than to perpetuate the revolution. Ten years ago, dictator Zine El Abidine Ben Ali was overthrown and replaced by a "some kind of" representative democracy, but no fundamental problem of laborers and youth could be solved. The reasons for the uprising of 10 years ago, which could be listed as unemployment, poverty, corruption, expensiveness, futurelessness, and mismanagement, still relevant. The children of the last decade, are now fighting the police in the poor slums of Tunisia, repeating the same slogan of the previous rebellion: "the people want to bring down the regime".

The current system in Tunisia is completely helpless. They cannot solve deep-rooted social problems, so all they can do is to increase police aggression and hide behind Covid-19. Different bourgeois parties, which are in constant conflict with each other, are rapidly disenchanted with the people. Among them is the Tunisian branch of the Muslim Brotherhood, Nahda. Although Nahda —nowadays a partner of the government— is the most organized group, its social support has shrunk from year to year. This latest wave of protests will further accelerate the decline in support.

The masses of youth, who now face the army forces after the police and at least 1000 of them arrested, speak of "completing the revolution". The protests that started on December 27th destroyed the dictator on January 14, 2011. However, without abolishing the bourgeois relations of production, the real problems could never be solved. That is why today the discourse of "completing the revolution" is popular that shows the great opportunities that Tunisian revolutionaries have ahead of them. Getting together around a specific program and action plan will greatly shorten the distance to go. The young masses taking to the streets can find themselves in shambles and feel helpless unless a vanguard is embodied. The call of the 12 left-socialist circles to support the youth action will hopefully be the beginning of stronger interventions. *

North Africa and the Middle East have become one of the central points of class movement in the last ten years. In these ten years, large-scale riots took place in Egypt, Tunisia, Iran, Lebanon, Sudan and Iraq. Algeria, Morocco, Bahrain and Turkey have witnessed important struggles. And nowadays, the possibilities of revolt are getting stronger again in early 2021, times of economic crisis rapidly impoverish workers. The capitalist mullahs in Iran are sitting on a time bomb, and there is no day without action and strikes in the country. All the conditions for a social explosion are present. 4000 workers of Helwan Iron and Steel Factory took action against the privatization efforts in Egypt. This force, combined with other workers' actions, causes the repressed hopes to re-emerge and make Sisi lose his sleep. And of course, Tunisia, where the wave of protests is still not suppressed. Lebanon and Iraq, which are very suitable for a resurgence... And Turkey, where workers’ actions proliferate, the class struggle begins to dissolve cultural polarization, people are increasingly impoverished and displeased. History is accelerating: the rise of the class movement will once again stand up against the imperialist capitalists as an inevitable force. It all depends on whether we revolutionary Marxists can grow stronger and rise to the position of the revolutionary vanguard.