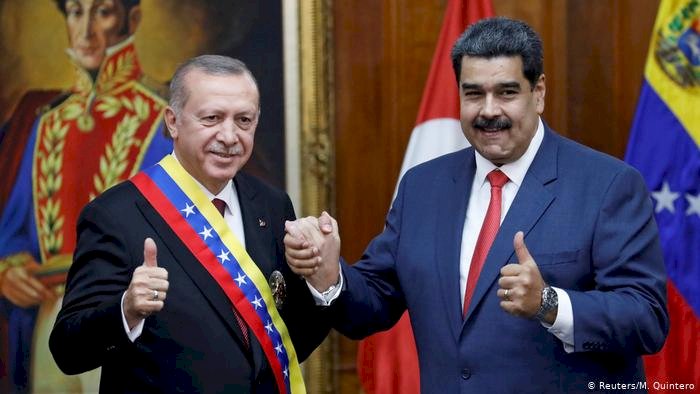 While the public is focusing on the video that Sedat Peker will release tomorrow, May 30, it is worth mentioning a point that has been revealed so far: the cocaine trade on the Turkey-Venezuela line and the relations established between the two countries, especially in the last five years. With the idea of “Bolivarian Revolution”, Venezuela became an agent for compensating the loss of meaning, that has also been misinterpreted by the socialist left of Turkey for many years. While the eulogy of Chavez and Venezuela has been influencing the socialist left; history has shown us that neither a revolution nor a socialist experience could be a matter of discussion here.

Some of the social policies that were put into practice during the Chavez regime have been an important source of illusions about Venezuela. While the sanctions put into effect by the USA in 2015 have undermined the financial basis of social assistance; in the following years, it caused the Venezuelans to be dragged into incredible poverty and misery. The decline in oil prices from $120 to the $38 between 2014 and 2016 also reinforced the crisis. In 2017, with Trump in power, the economic sanctions on the country’s oil production company, PDVSA, and on Central Bank was increased. Last year, Venezuela’s oil production fell as low as in the year 1934, according to OPEC data. As a result, inflation in Venezuela reached extreme levels, making it impossible for the public to access to even the most basic consumer goods. Millions of people sought a solution by immigrating to neighboring countries in Latin America.

The US was aiming that the sanctions would trigger a social explosion against the Maduro regime, increasing the social support of the pro-US opposition against Maduro, and thus accelerating the collapse of the Maduro regime, just as against Iran. In fact, in April 2019, a coup attempt was made under the leadership of the President of the National Assembly, Juan Guaido, but this attempt failed.

In this process, Turkey was one of the countries that Maduro got into relations both to find a solution to the economic crisis and to support the political siege. His visit to Turkey in 2017 is also an important turning point in Venezuela - Turkey relations. That was the first time that a Venezuelan leader made an official visit to Turkey. Maduro’s visit to the set of nationalist history series Diriliş Ertuğrul and feast he had in Nusret remained in minds. On the other hand, he made a mind-blowing defense against the criticisms of these images: “they called me Sultan Maduro there”.

After the US-backed Guaido declared himself the legitimate president in January 2019, in an interview with Turkish journalist Cüneyt Özdemir, Maduro stated that they condemned the coup attempt of July 15 and expressed the following about his relations with Erdoğan: “Since then, we have been friends with Mr. Erdoğan. I can state that he is a very good friend. I am in love with Turkish people. Turkey has a really important and beautiful history. So, I am very happy that they support us in the name of democracy and stand by us.”

Peker’s revelations have shown that the fateful partnership between Turkey and Venezuela was not just an innocent relationship. Previously, Western media outlets had emphasized the gold trade between Venezuela and Turkey. They had stated many times that international prohibitions were broken in this way. However, it is now loudly stated that the rulers and mafia elements of both countries also play a role in the mutual drug trade.

In his latest video, Sedat Peker stated that Erkan Yıldırım, an AKP member and the last Prime Minister Binali Yıldırım’s son, has been playing a role in the creation of a new drug route by frequently going to Venezuela lately. Binali Yıldırım, on the other hand, responded to this claim by saying that his son brought test kits and masks to Venezuela.

Accusations of drug trafficking against Venezuelan ruling cliques are nothing new. Western media outlets frequently make claims that Maduro and those around him are also part of this business. In 2017, two nephews of Maduro’s wife, Cilia Flores, were arrested in Haiti and immediately sentenced to 18 years in prison by the US court. In addition, Venezuelan state security forces play a role in the rise of the Cartel of Sun, one of the largest cartels in the country.

Ten years ago, a similar thing to the Sedat Peker case in Turkey had also occurred in Venezuela. After his capture in Colombia, drug lord Walid Makled was extradited to Venezuela as a means of curbing tensions between the two countries. He exposed his relations with Chavez administration in an interview he gave in prison.  In his interview, he stated that he made regular monthly payments to five congressmen and gave millions of dollars in bribes to the officer including senior officer.

Peker’s revelations reminded us once again how closely the state is involved in dirty things, ranging from drug trafficking to unsolved murders. This situation is specific to neither Turkey nor Venezuela. We had previously read from an Afghan comrade’s article about what role the US and Western countries play in the drug trade in Afghanistan. Capitalist states do not miss the chance to commit crimes in every field they enter.

The main contradiction is that the dirty relations of the Venezuelan regime with figures such as Erdoğan and the role they play in the drug traffic are passed off with silence by socialist left.

If the socialist left is to march on with the goal of building a new world, it must settle old scores with those who ruined the bright flag of socialism with the crimes inherent in capitalist barbarism.

If the socialist left is going to set out with the goal of building a new world, it must also question those who pollute the clean flag of socialism with crimes typical of capitalist barbarism.