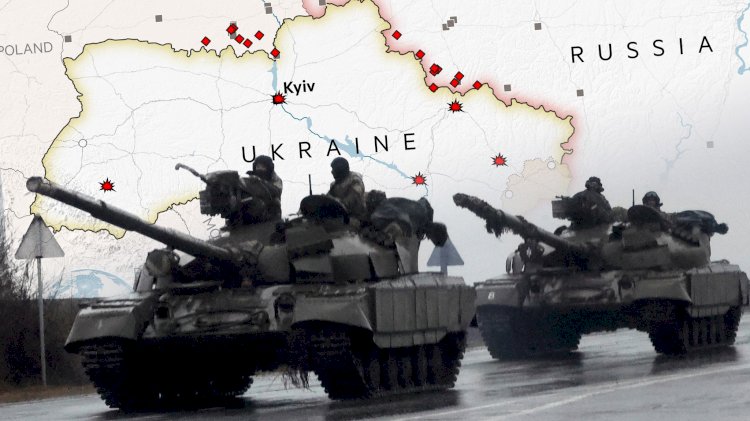 The imperialist war that broke out in Ukraine revealed how fragile the capitalist world system is. We have seen by experience that the possibility of nuclear war in a world dominated by imperialist barbarism is not a dystopic fiction at all.

The capitalist crisis of 2007/08 had hastened the emergence of trends that had been developing for a long time. As a result of this process, liberal-parliamentary "democracies" are losing ground, while the economic and political leadership capacity of the USA and EU is declining. Fresh examples of this situation came from Europe, the “heart of advanced democracy”. In the elections held in France, the total votes of the far-right in the first round exceeded 30% for the first time. In Hungary, the nationalist, religious and authoritarian Orban once again managed to win the elections.

However, those who identify of the bleeding process of liberal democracies in favor of authoritarian demagogue politicians as "new fascism" are presenting us with a black and white illusion instead of the multicolored reality. Between the power of fascism and the "broad" liberal functioning, there are many different faces of bourgeois power (dictatorship). In times of crisis, as throughout history, the liberal constitutional process begins to fail, and moderateness gives way to fierceness. Riots, wars, and nationalist authoritarian figures… The “process” we are going through is an unequal one, full of national peculiarities, in which the class struggle also rises, and it is too protruding and formless to fit into the bag of fascism.

For example, the leader of liberal democracies, the USA, had the opportunity to revive its military, economic, and political leadership capacity thanks to the Ukraine war. In this process, the ideological leverage of the USA is once again the aligning of liberal democracy against dictators. The symbol of authoritarianism, the "free world" defending Ukraine against Russia! This distortion is just as empty as Putin's "anti-fascists versus Nazis" distortion. But it's clear that it works to a certain extent. See, in Pakistan, dictatorship enthusiast, nationalist, populist, and demagogue Imran Khan has already been demoted from the prime minister's position in a "constitutional" operation supported by the USA and in which the Pakistani army is at the center. Or we witnessed how the EU had to side with the US in the Ukraine War. Thus, the possibilities of the Germany-France center of gravity to develop economic and political relations with Russia and China, which are independent of the USA, have decreased. Eastern European states are already clustered around NATO. The US military began deploying new military forces in Poland, Romania, Bulgaria, and Greece. It can be easily said that the winner of the Ukraine War so far has been the USA.

If Putin had taken over Kyiv in a few days and put a puppet government as he had absurdly imagined, the effects of this on world politics would undoubtedly have been different. After all, the main lines of the imperialist division are drawn as a result of the wars. However, Putin's plans would prove to be a disastrous illusion. As a result, the horror of the Ukrainian people and the Russian soldiers who were driven into the war turned into an opportunity for the United States.

NATO forces, led by the United States, have deployed all possible means to deal a heavy blow to the Putin regime militarily and economically. Russia is taking heavy blows economically, politically and militarily. These costs will increase as the war drags on. On the other hand, Russia is a huge market and, at the same time, a very active energy giant. It is clear that the economic blows to Russia will have strong side effects. We can see the direct consequences of this on rising energy and food prices and general inflation. But the United States is prepared to face these side effects, leaving some flexibility for its partners. For example, it can be tolerated that Turkey does not participate in the Russian embargoes, or that the EU continues to buy oil and natural gas from Russia. This flexibility is essential for the remaining pattern of economic sanctions to continue.

The Cold War and the Bipolar World

Thanks to giants such as China and India, Russia can find new markets for its oil and natural gas and can strengthen its relations with these powers. This brings to mind the possibility of a new bipolarity and cold war. But first of all, India will not be a part of such a party. They already have ancient enmities with China. India will want to act in accordance with its nationalist interests.

For China, the situation is somewhat different. The main rival and target of the USA in the re-sharing of world markets and economic-military competition in China. The dependent party in the China-Russia relationship is undoubtedly Russia.

The center of gravity of the world economy has shifted from the Atlantic to the Indo-Pacific for the last 30 years, that is, the decisiveness of South and East Asia has taken a leap. Thus, new centers of economic, political, and technological power rise. In this context, it is necessary to read the rapprochement between China and Russia, which first comes to mind from the new alliance relations formed in this context. However, the main factor that will add depth to this rapprochement will be the dose of harshness in the US's anti-Chinese steps. China may think that a quick break from the Western world is not in its favor, because time is running in China's favor. Every year, China is catching up with the USA in terms of economy, military, and technology.

From a military point of view, Russia has so far made little progress despite heavy costs and had to withdraw from Kyiv and Northern Ukraine. However, unlike NATO powers, Russia has an authoritarian regime and the ability to tolerate massive human casualties. Taking control of Mariupol and establishing the Crimea-Donbass land connection is the only gain for Putin. Encircling the Ukrainian army in eastern Ukraine or cutting off Ukraine's connection to the sea by advancing along the Mykolaiv-Odesa line are Putin's current goals (dream). But it seems that the Russian armies have made very limited progress and that the Ukrainian front continues to receive high-tech weapons from the West. Putin's plan to hold a referendum in the Kherson region is very important both for the bargaining table and to deepen the occupation according to the course of the war.

So, can things turn around for the Putin regime at some point in Russia? Couldn't the heavy humanitarian and economic consequences of the imperialist war, as in 1905 and 1917, have consequences against Putin? For now, the Putin regime has managed to silence the anti-occupation protests with oppression. An anti-occupation movement may arise in the future, but we must not forget that Russia is not the old Russia and that the revolutionaries and workers' movement of the last century had created a very different political balance at that time.

In fact, it is obvious that the system cannot do without war. Just recently, ISIS had declared its own Islamic State and shook the world. In order to defeat ISIS, no stone was left on the ground in cities such as Mosul, Raqqa and Al-Bab. In Yemen, tens of thousands continue to die and millions continue to starve in a war that no one cares about. It has been less than a year since the US conceded defeat in Afghanistan and infamously left the country to the Taliban. Examples can be multiplied…

The Ukrainian War, on the other hand, is different from all of them in terms of its dimensions and effects. While there is world giant Russia on one side of the war, there is no Georgia or Chechnya on the other side! Ukraine, which the West has prepared for war for 9 years and actively supported during the war, is a power that cannot be underestimated with its population of 45 million, and its industrial-military capacity. Most importantly, the historical anti-Russian Ukrainian nationalist vein seems to have taken a larger part of the population behind it since the 2014 war. Putin did not find the support he expected from ethnic Russians or the people living in Russian-speaking areas. He could not read this fact. As a result, it found a highly cohesive and belligerent Ukrainian nationalism against the Russian invasion.

However, the Russian army was in no way prepared for war. The seasonal conditions were not suitable for such a large invasion. Tanks and armored vehicles were moving along the roads in convoys as they would get stuck in the mud. In this way, they were easily ambushed. Since air superiority could not be achieved, the convoys could not be protected from the air by patrols. There were also not enough soldiers available for such an invasion. Moreover, there was no combat motivation in the Russian army.

Now, Russia has captured the strategic city of Mariupol with all its might, excluding the iron and steel factory. The unification of Crimea and Donbas is very important militarily. Putin will either make gains on the status of Crimea and Donbas at the diplomacy table and be content with them or he will try to encircle the Ukrainian army, which is clustered in the east of Ukraine, with the rejection of the demands of the Kyiv side, by advancing in the north-south direction. This will mean that the war will prolong and become much bloodier.

David Beasley, Head of the World Food Program (WFP), told BBC World Service; the number of people facing potential hunger worldwide rose from 80 million to 276 million in the four years before Russia's invasion of Ukraine, due to a "perfect storm" of conflict, climate change and a pandemic.

As a result, the anger of workers around the world is rising. Protests in Peru, Sri Lanka and Sudan took extremely radical forms. The masses are determined not to stop fighting against curfews and state terrorism. Apart from protest movements, we observe the development of industrial workers' movements in countries including Turkey. Global discontent is growing as the high cost of living pushes workers below the poverty and starvation line. The rise in food prices seems to be a primary factor to increase the social events related to hunger in Africa. And many states are very close to declaring bankruptcy, like Sri Lanka, Peru and Lebanon. As a result, capitalism continues to produce crises, wars and revolts. In this turbulent period, it is vital that revolutionary Marxists, who can lead the workers' movement, gain power and rise to levels that will play important roles.