ISL International Declaration on the Environmental Catastrophe in Australia 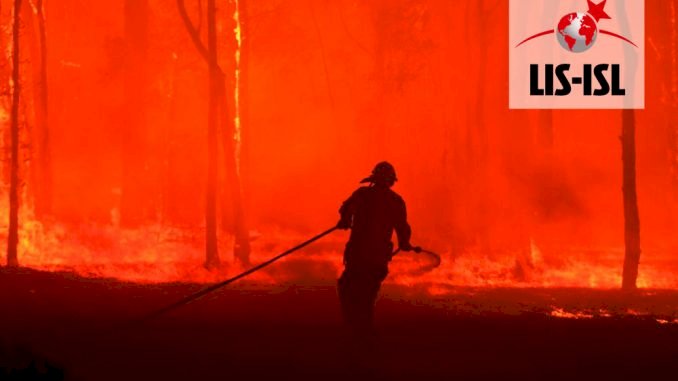 It’s Not the Climate, It’s the System.

We Must Do Away With Capitalism Before it Does Away With Everything.

An acute environmental catastrophe overruns Australia. Since late September, what is known as the “fire season” has become an out of control hell on Earth. The international media and the organizations that operate in the country coincide in pointing out the historical magnitude of the disaster: 6 million hectares have been devastated by fire and an area the size of Europe is affected by smoke, 23 people have died and more than 200 are missing, thousands of homes have been destroyed and almost 500 million animals have died, in what constitutes a true ecocide.

The southern and southeastern states of Australia, which concentrate the largest population, are the most affected and thousands of people have been evacuated. The images that cross the world show scenes taken out of catastrophe films. Unfortunately, what happens in Australia is not science fiction nor, by the way, a “natural phenomenon”: we are facing a new and devastating example of the abyss that the imperialist capitalist system is pushing our planet into. It is a new and dramatic warning to stop this course and turn in a new direction.

Australia is one of the main emitters of greenhouse gases per capita in the world. Its economy is essentially extractive and six of the country’s top 30 firms are related to mining and hydrocarbon production. Coal represents 15% of export profits.

The neo-liberal government of Scott Morrison has been and continues to be, even faced by the terrible evidence, an active denier of climate change. Morrison is a reactionary homophobe that is supported by extractivist corporations and military cooperation agreements with the US. Instead of intervening against the fires, he has prioritized sporting events seeking to hide the crisis. But the population points him out as the most responsible for having reached this point, not only for encouraging and driving the extractivist model to the limit, but above all for acting late and inefficiently against the catastrophe: he delayed the intervention and allocated scant resources, while he spends indiscriminately in other areas.

And it is not just the ruling party: the entire Australian regime is based on the “coal consensus.” That is why both Liberals and Labor resist recognizing climate change – or if they do, it is without proposals for change – and they intend to continue with the same model that has caused the current disaster.

Australia reached record breaking temperatures twice in 2019, a drought has been ongoing on for the last ten years and is putting the country’s main river basin in danger. Its combination with the so-called Indian Ocean Dipole – a phenomenon similar to the “El Niño” of the Pacific – has led to an extended period of heat and drought. But all these “natural” phenomena are exacerbated by the devastating effects of the emission of greenhouse gases that increase the planet’s temperature. While there have always been fires in Australia, what is happening now has to do with new conditions generated by capitalist voracity and the accelerated global warming process. At the same time, this is accompanied by growing divestment in all areas of control and necessary social containment. As Australian Socialist Alternative comrades point out in an article published in Red Flag: “We see firefighters making do with pathetic paper masks, while the government gifts $12 billion every year to fossil fuel companies ($29 billion if you count indirect subsidies)”. There lay the causes of what is happening in Australia, as well as the recent fires in the Amazon and California, where almost one million hectares in each area have been burned. It is not a question of multiple random events, but of the consequences of an unjust and predatory system that places life on Earth at serious risk.

On the basis of these causes, the paths to begin to reverse the ecological crisis must be sought, obviously beginning with emergency measures, which at the same time must be linked to substantial measures to an end to ecocidal capitalism once and for all.

The International Socialist League (ISL) supports the organizations that demand a response from the Australian government and the state: the immediate availability of all the necessary resources to stop the fires and provide relief to the millions of inhabitants, as well as the wildlife and flora, that are in danger. To this end, it is necessary to put an end to all subsidies to corporations and to requisition any infrastructure that may be useful to fight fire, withdraw all military initiatives outside the country and turn all these resources to effective action against the disaster.

Since we cannot rely on the same political institutions that are responsible for what is happening, it is essential to establish strict social control over all procedures to ensure that resources are sufficient and arrive in time and form where they are needed. In turn, the international community should provide urgent support and, instead of fueling various war actions, allocate all the technology and tools available to a broad international campaign to fight the fires and end the catastrophe.

Faced with these types of situations, all imperialist governments reveal their role as guarantors of the interests of corporations and their absolute inability to provide minimum conditions of survival for the planet. They expose their priorities and their reactionary nature, clearly demonstrating that this system, its institutions and parties are lost and must be terminated before they end everything.

Revolutionaries pose an alternative solution: a transition towards a different model based on social needs and a development harmonious with the environment, a truly democratic and egalitarian model in which the working majority is the protagonist. This distinct system, socialism, is the only solution to capitalist barbarism.

The ISL, together with the comrades of Socialist Alternative of Australia, we call on the environmental, human rights, youth and popular organizations of all countries to develop a great international campaign of solidarity in order to achieve these urgent measures against the fires in Australia and to strengthen the internationalist ties that are necessary to advance towards the structural changes that are needed.