ISL Statement: Solidarity With the Rebellion in Minneapolis and Across the United States 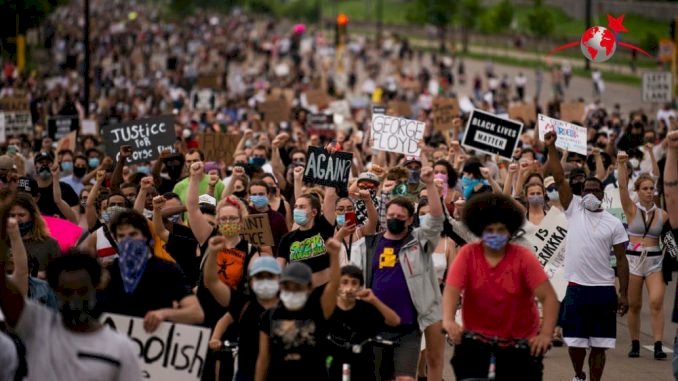 George Floyd was murdered by the police. Chocked under an officer’s knee, he repeatedly said “I can’t breathe.” The words “I can´t breathe” recall the murder of Eric Garner in Staten Island, New York, on 2014. These words are not the only thing they had in common. Both deaths, as thousands more, are the product of the deeply embedded racism and brutality of the police. As well as the underlying structure of capitalist inequality and power. The structural racism of the capitalist state and its police forces are responsible for George Floyd´s death.

After a video showing the police brutality went viral, a protest movement has spread throughout the United Stated. On its fourth day, actions took place in at least 30 cities, including Washington DC, where a major mobilization forced the White House into lockdown. A true rebellion is unfolding in Minneapolis and the state has deployed the National Guard and issued a curfew over the weekend.

The emergence of the Black struggle and the development of a nationwide protest movement against police violence and racism is a key event in the development of the class struggle. Its importance transcends US borders. It is one of the great rebellions that have developed in the international situation ushered in by the pandemic. It offers a preview of the struggles that will take place worldwide in response to the growing misery. It is part of the ongoing struggles of the working class, like the wave of wildcat strikes that have taken place during the pandemic. It has the potential to open a new situation in the class struggle in the United Stated, strengthening the working class as a whole.

The state’s response has been repression. The entire political establishment, from Trump to Minneapolis Democratic Mayor Jacob Frey, has come out to confront and criticize the protests. The former tweeted that the Army was ready to regain control, and that “when looting starts, the shooting starts.” Frey, for his part, argued at a press conference on Saturday morning that protesters are not Minneapolis residents, but outsiders seeking to cause violence. It is the discourse that accompanies repressive escalation. More than 1700 National Guard troops have been deployed to the region, in the largest operation in the history of the state of Minnesota.

The depth of the structural inequalities of US capitalism, and its particular impact on African American and Latinx communities, was once again exposed to millions by the pandemic. These communities are the hardest hit by Covid-19 cases and deaths, they are the ones working in essential jobs and being exposed for wages of misery, suffering racism and discrimination even in access to healthcare, suffering the consequences of the state’s divestment, and also have the highest levels of unemployment. Police violence, poverty, low wages, lack of access to health care and high-risk jobs are part of the systemic racism of US capitalism.

The Minneapolis and St. Paul metropolitan area is one of the most unequal and segregated in the country. Before the outbreak of the current economic crisis, unemployment affected 10% of the Black population in the “Twin Cities” and 32% lived in poverty, well above the national average. Segregation of the urban space and education is also very significant, in a state that was the first to allow charter schools.

This reality can only be sustained through the exercise of systematic state violence towards the working class, the poor, and African American and Latinx communities. The police are trained to be brutal and to perform class and racial profiling. These are not isolated incidents. More than 1000 people a year are killed by police forces in the United States. In 2019, there were 1099 police killings. In 99% of cases, the police officers who committed these murders were not charged with a crime. This impunity guarantees the perpetuation of brutality. This structural violence is also linked to systemic racism. African Americans and Latinxs are subjected to persecution and harassment and are more likely to be victims of violence and killings by the police.

The protests have already achieved a first partial victory with Dereck Chauvin’s arrest for murder. But this is not enough. The four officers who have direct responsibility for Floyd’s murder, as evidenced by the video footage taken by various cameras, must be charged and convicted.  The institution that produces these killers should not be left in impunity. To achieve justice for Floyd, and for all African Americans who are killed and harassed, we must dismantle the racist police. This institution exists to protect the interests of capital and to enforce the inequalities that capitalism produces. The struggle for justice and against police brutality is part of the struggle against the racist capitalist system. The capitalist system produces and reproduces racism and racial oppression to sustain exploitation. That is why the fight against oppression must be combined with the struggle of the working class and the peoples of the world against imperialism and the capitalist system, with the struggle for socialism. With this perspective, the International Socialist League stands in solidarity with the rebellion in Minneapolis and across the United States and calls on the working class, the youth, human rights organizations, women who have been fighting oppression, to stand with this fight for justice around the world.