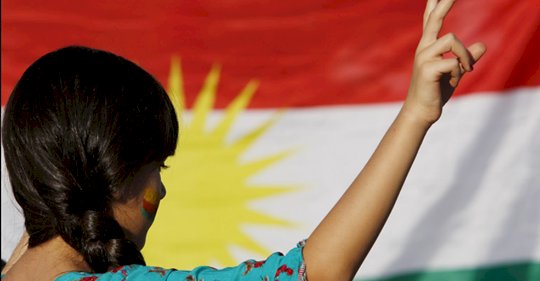 The names of the cross-border operations to Syria are “Olive Branch” to “Peace Spring”… Names are ironic, the Kurdish people’s pain and anger is great. As Güneş Gümüş pointed out, what’s happening nowadays is “al-Nakba” of Kurds. On the other hand, this “Great Catastrophe” has come blatantly. It is important to draw some conclusions…
The vast majority of working people in Turkey fall in the chauvinistic atmosphere of the oppression on Kurds. Tens of millions of laborers are in the grip of unemployment, low wages, deunionization, precarity, intensive exploitation, long working hours and mobbing… Is there a future for the workers? Absolutely not!
There is an accumulation of anger in that respect. The material conditions of the social explosion are maturing, but when the weapons are talking, the laborers surrender to chauvinism. And the anger of laborers’ is appeased. As the workers are hostile to the political preferences and demands of the Kurds, divisions within the working class increase. In turn, there is more divisions among workers, more vulnerability to capitalists and more weakness against the ruthless exploitation. How can joint struggle be possible if Turkish and Kurdish workers working side by side see other as enemies? In the absence of a common struggle, the laborers are squeezed like a lemon and thrown aside when the job is finished.

Full Side of the Glass

On the other hand, in spite of all the fuss in the media, we observed that especially in the big cities, they could not gather crowds that are fully agitated, that the people generally continued their daily lives, and that the excitement and aggression were limited to the progovernment and fascist groups.
Opposition to the AKP is so sharp in the society that despite the increased nationalism, there is no significant increase in AKP’s social support. On the contrary, the masses who are worried about the strengthening of the single-party regime are skeptical about the intervention in Syria.
When the CHP -expectedly- joined to the nationalist bloc following the AKP, party grassroots reacted. These reactions hardly find voice due to security concerns and arrestments. But when an CHP MP ,Sezgin Tanrıkulu, expressed his opposition to the operation and faced a massive reactionary threat he was supported by those CHP supporters. A significant number of CHP voters, aware of the fact that the AKP was defeated thanks to HDP votes in the local elections and are better in empathizing with the Kurds than before.
However, the CHP’s policy of Syria has only some methodological differences from AKP’s. CHP’s program is to coordinate with Assad not jihadistsand beat Kurds in Rojava in that way. Obviously, it would be pointless to expect an internationalist stance from the founding party of the bourgeois republic, the pro-capitalist CHP.

The End of Rojava and Freedom of the Kurds

Hence, the SDF (Syrian Democratic Forces), which does not have any chance against TAF (Turkish Armed Forces) and its ally FSA (Free Syrian Army), had to hand over the areas they control to Assad regime. It is obviously that this is a “desperate times call for desperate measures” situation, because it is not possible for the Arab nationalist Baath regime to allow the autonomous cantons of the SDF, as well as the YPG, as a separate military structure.
So we are witnessing a dream turning into a nightmare. Today, the SDF is experiencing a similar situation, even the heavier in terms of its consequences, that Barzani had in Iraq two years ago. While we are witnessing a historical turnout, an era closes and the new one begins, and none other than the deep frustration and pain that remains in the hands of the Kurds. It is proven by centuries of experience that there is no solution within imperialist system.
In the equation of nationalism, nation-states and imperialist powers, a democratic or military solution of the Kurdish question cannot be possible. The only route for solution is the class-based and the revolutionary one. Even when you think that you have the world’s superpower behind you, even when the bourgeois states like Iraq and Syria seem to fall, the gains of the Kurds are suddenly destroyed. The conclusion is that the freedom of the Kurds is only possible with the success of a united socialist popular movement that aims at the imperialists, bourgeois dictators and states as a whole.
No power can stand against the internationalist revolutionary unity of laborers from different ethnic-denominational origins of the Middle East. The oppressed Kurdish people can only be freed in this way. The resistance of the oppressed is, of course, justified and legitimate, but the path to salvation must be investigated.