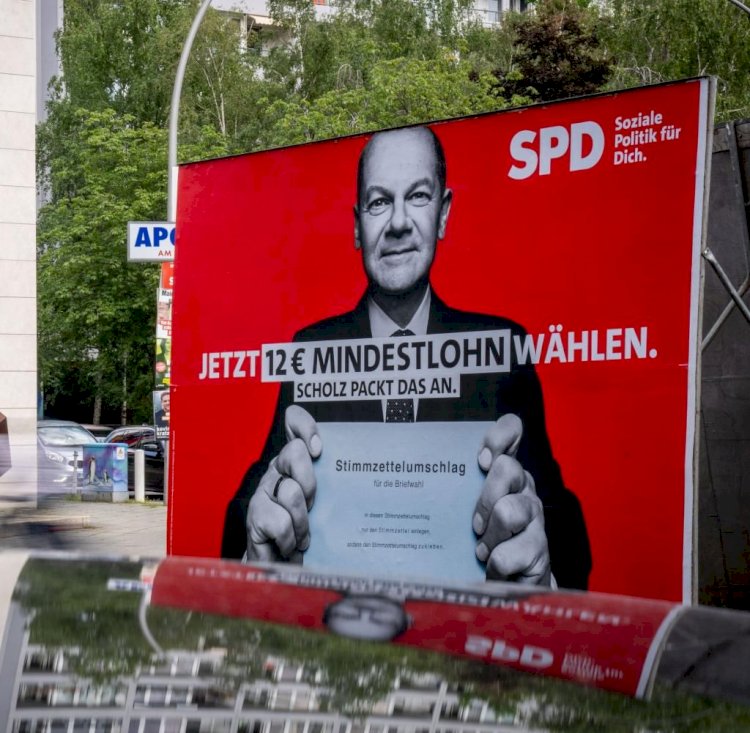 The federal elections held in Germany on September 26 opened the door to a new era in the country. As a result of the elections, Merkel's 16-year term as chancellor came to an end. While the German Social Democratic Party (SPD) emerged as the first party with 25.4% of the votes, the Christian Unity Parties (CDU-CS) took second place with 24.1% of. The Green Party received 14.8%, the Free Democratic Party (FDP) 11.5%, the fascist AfD 10.3%, and the Left Party (Die Linke) 4.9%, respectively.

After the elections, it is eagerly awaited how the coalition government will be formed in Germany. Because while there is a rivalry between SPD and CDU-CS to lead the coalition government, parties such as the Greens and the FDP are struggling to play critical roles in coalition formation.  The only thing that is certain so far seems to be that they have declared that they will not include the fascist AfD in the alliance, no matter who forms the coalition.

The elections have remarkable consequences for German domestic politics. Especially in terms of parties on the left of the political spectrum. In Germany, where social and economic problems came to the fore with the Covid-19 pandemic, it was clear that the working class would listen to what the political parties had to say on this matter. Although it is the first party, the period between 1998 and 2005, when the SPD was in power together with the Greens, remains in memories with their attacks against the social and economic rights of the German working classes. In the fact that the SPD has won an election for the first time since 2002, the failure of its rivals should be taken into account, rather than its own success.

On the other hand, Olaf Scholz, the SPD's candidate for chancellor, stood out as a guarantor for both the capital and the sectors of the society that favors the preservation of the current economic stability. In the current crisis and pandemic climate, Olaf Scholz's proposals for a capital-friendly program that does not sacrifice the privileges of traditional industries such as automotive, chemistry, and steel for the sake of the solution of the climate crisis, as well as raising the minimum wage to 12 Euros per hour, enabled him to stand out as a candidate that can absorb class tensions.

Despite the high expectations from the Green Party in the elections, it was seen that the party's vote rates did not increase as much as predicted. Pre-election polls indicated that the Greens could reach 24%. Although the party's past on the climate crisis was a disaster, its emphasis on this issue in the center of its discourse in recent years played an important role in the increase in its popularity. The Greens' proposal for a transformation compatible with capitalism as a solution to the climate crisis, which is now one of the main agendas of capital in the EU, received the expected support from the capitalists. However, it was revealed that Annalena Baerbock, whom the party nominated as the chancellor, plagiarized and did not declare her additional income, and that she included racist expressions in some of her speeches, causing the party's voter support to meltdown.

The fiasco experienced by Die Linke, who lost approximately 4.3% of the votes compared to the previous election, is remarkable, which is not so surprising. While Die Linke put its signature under a completely disgraceful class collaborator performance from past to present in the states where it is in power; Die Line is remembered for its cuts in social spending, anti-immigrant stance, and its failure to fight the pandemic. The party devoted a significant part of its energy to the post-election coalition calculations rather than the problems of the working classes and the youth. They often called out to the SPD and the Greens for coalition partnership. In a sense, Die Linke moved away from being the pole of attraction for the working classes and youth to the extent that it resembled and tried to prove its compatibility with its political rivals such as the SPD and the Green Party, and lost the electorate to these parties. Although they have not experienced the power like Podemos and Syriza, Die Linke will already take its place in history as a subject of the bankruptcy of parliamentary reformism and the mass party model compatible with the order.

No matter how the political future is shaped in Germany, no major changes are expected in the functioning of the system, despite the tonal differences. It is obvious that the German rulers will give a blank check to a coalition that will guarantee the continuation of the aggressive and militarist policies they pursued in imperialist competition, especially during the Merkel era, and no alternative available seems to shake this status quo for now. Moreover, as the capitalist crisis deepens, almost any alternative will hesitate to follow a class-enemy agenda. As can be seen from the election, despite the discontent in the society, the radical left in Germany has a weak influence.