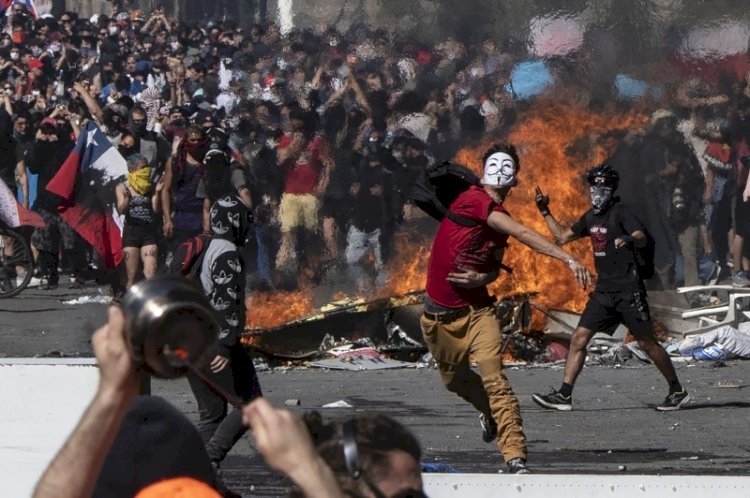 Revealing all the economic, political and sociological contradictions of the world order, the pandemic knocked on the door when the revolts and the dynamics of social change were extremely active against the crisis of neoliberalism. The ones who are in their homes now, could the fighters of tomorrow? The whole world says one thing, Nothing will be the same as before.

Revolts before the Pandemic

Until a few months ago, tens of millions were rebelling in the streets and squares that are empty today against the capitalist order that today apparently bankrupted in the face of the pandemic. Neoliberalism, which have destroyed the organization of workers, social rights and public services, and are brought in by military coups, authoritarian-right governments or former social democrats to increase exploitation rates and profits, was the subject of riots in the France, Spain, Iran, Sudan, Algeria, Tunisia, Ecuador, Chile Haiti, Iraq and Lebanon, where the poor returned to the stage in a glorious way. The coup of US imperialism in Venezuela failed, and in Bolivia Morales was exiled to Mexico. In short, the streets marked a rising moment of the class struggle for the coming years.

The reasons and demands of the revolts will become sharper and deeper in this process and the empty streets will fill with more angry slogans tomorrow. However, although they all rose from the class basis, they did not move around a class organization and they did not use the means of class struggle but of a popular movement. This dynamic is now at home an in “suvival mode” in the face of the coronovirus pandemic but after this process ends, it would turn into a clearer class movement tomorrow. The popular movements before the pandemic will have a clear tone of class movement as the outbreak sharpened the class contradictions.

In the course of the general crisis of the world order, the coronavirus epidemic occured a new equation that crystallizes the arena of class struggle. Millions are sent to work by force just because of the capitalist greed in nonessential sectors. It is seen thay even the most basic hygiene materials are not available in capitalism, which is praised as the "economy of abundance"; It turned out that the health system left to the mercy of the market is just a rubbish. Moreover, in the countries people suffering in hospital corridors, the rulers chose to support bosses. And as an advanced example, in Turkey, Erdoğan government only gave financial support to the big bussiness , especially the construction sector(!), and asks for money  from the people to donate for those who are suffering.

The biggest players of the imperialist capitalism completely failed in the face of the outbreak. Chinese rulers chose to run the economy without controlling the virus outbreak until the last moment. Chinese-style authoritarianism and excessive exploitation were  always the priority. But the downturn of the economy quickly affected the whole world. There have been historical declines in the world markets. Oil fell below $ 25. The copy-paste idiots  in the power of USA,  where only a few have social security and UK(which has entered a historical crossroads with the Brexit agenda) showed with extreme examples what "advanced capitalist" civilization is based on the argument that it is more economical to kill people than to stop the economy.

While this article is written, it is seen that the golden years of Europe and bright years of capitalism has left behind with more than ten thousand deaths. EU countries, which once declared that the borders have disappeared, did not even send medical aid to Italy.  The number of deaths in Italy surpassed China. Italy was the symbolic country of the mass protests against the globalization that in the early 2000s where police killed activists and protestors in its streets. Since then, Italy has been turned into a deplorable country, where doctors have been "forced to choose the patient to die" by all right-wing and capital friendly governments, from Berlusconi to Conte. Today, the bourgeoisie who onced defended neoliberalism as an “alternative” Project, have no hegemonic discourse anymore to defend this old model or to reveal a new one. They do not come out of anything other than printing money, changingthe interest rates and making interventions to increase the demands with Keynesian policies, as they put it in the pandemic crisis today. 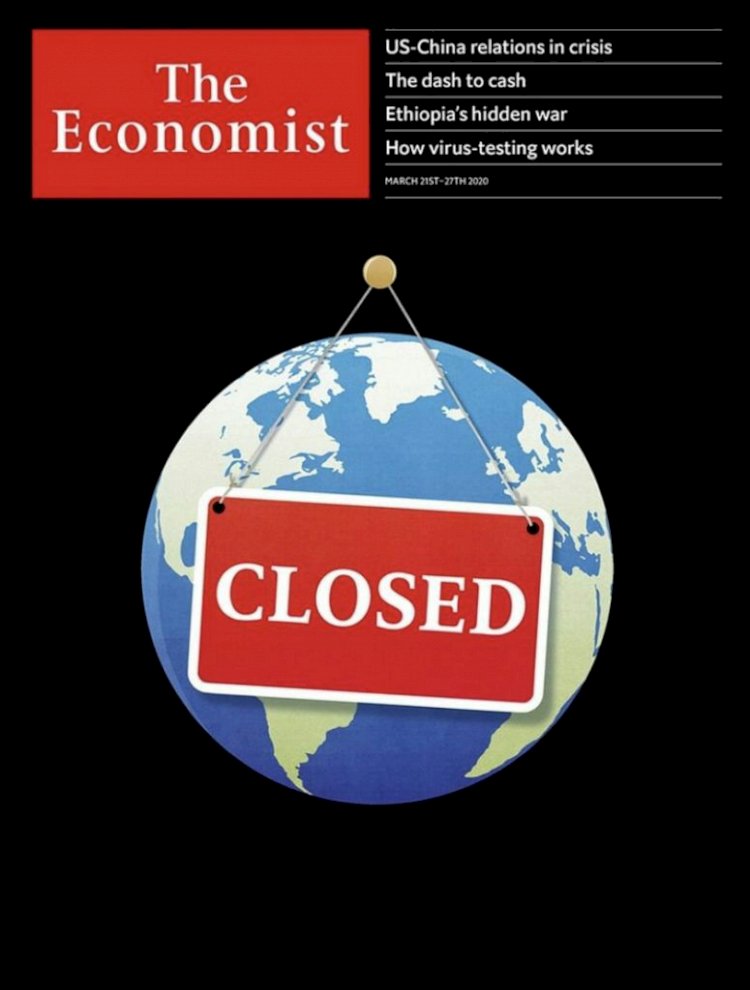 The working class manifested itself with various types of protests wherever they forced to work under the pandemic: In Italy, the third economy of Europe, workers organized wildcat actions and strikes, especially  in the automotive and metal industry. These actions did not only include requests to take necessary hygiene measures or to terminate the layoffs, but serious anger towards the government and the bosses lies at the heart of these actions: In response to the decision to halt the work of sectors that are not urgently needed, the boss organization called the workers back to work with a letter to the government of Confindustria Salvini. We saw large and small working class actions with similar qualifications and demands in Brazil, Australia, New Zealand, USA, Spain, Chile, Venezuela, Mexico, Canada.

On the day when General Electric, one of the biggest monopolies of the USA, announced its 10% layoffs, workers took action for the factory to produce ventilator in the USA, where the health system is completely depleted. The lack of a health system, which is one of the most challenging issues for Trump, may come up again as a social demand in the US election process especially when hundreds of thousands are face with death due to coronavirus. At a time when the "Medicare for All" campaign was gaining popularity, such a disaster could pave the way for US laborers to come to life with serious demands, especially public health. 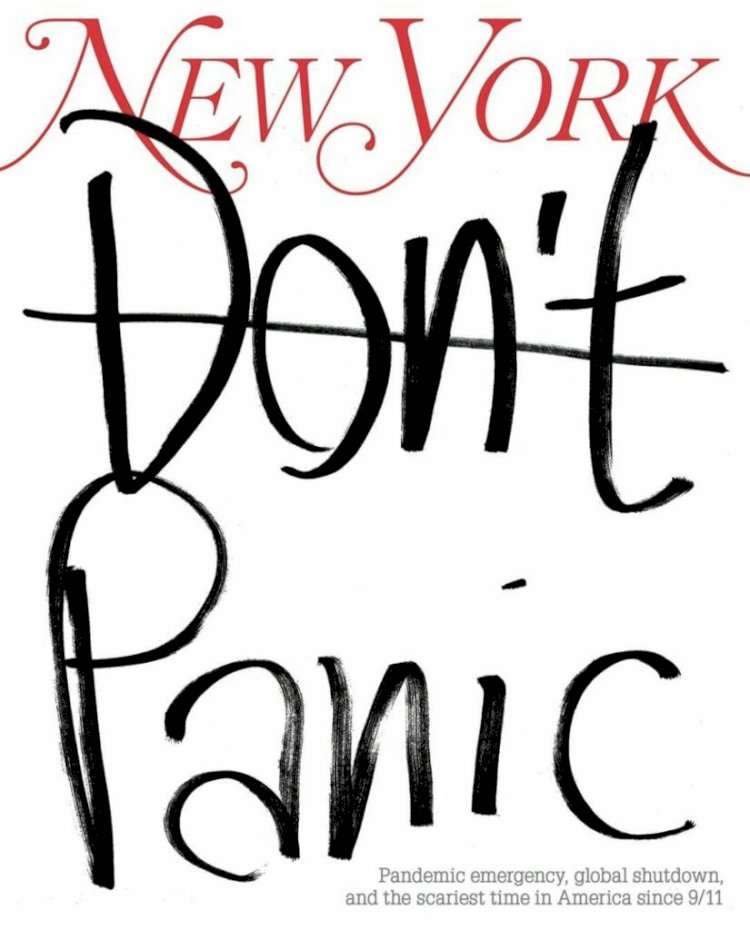 Whereas in the US, things seemed to be going well for the Trump administration.  The unemployment rate had dropped to 3.5 percent in February, the lowest level in 50 years. A steady course of growth observed in the economy. Now, economists American gross domestic product falling 30.1% in April-June. That will drive up unemployment to average 12.8% over the period, that is the fastest shrinkage in its history,. Over 3 million people applied for unemployment benefits. This number is 4 times more than the last record in 1982. The unemployment rate had increased to a maximum of 10 percent even after the 2008 crisis.

"The situation is only comparable to the 1929 crisis," says the French Economy Minister. “All the markets have collapsed," summarizes the German Economy Minister. Deutsche Bank Securities chief economist Torsten Slok summarizes how bourgeisie trembles: ““We already had a nightmare fear and we wake up and the nightmare is unfortunately real,” “These numbers are just telling you how incredibly severe and serious this is, for the US and for Europe.”

The French minister is not at wrong to refer to the 1930s. After the 2008 crisis, the discussion of whether we are going back to the 30’s widely discussed. The 30’s was not only a decade when the capitalist economy collapsed and re-organized (protectionist economy); it was also an important turning point of fierce class struggle that ultimately decided whether new model would benefit the laborer or the bosses. It was a complete "Age of Extremes" in which fascism, civil wars, revolutions, riots and the imperialist rivalry took place. Of course, it was the world war and the October Revolution that started this age. The crisis of 1929, which opened the door of a second period, made the 30s once again the years of intense class struggle.

The echo of the 30’s continued until the 70’s: Capitalism is shaken by revolutions, the bourgeoisie finances fascism to defeat revolutions, when the economic model aimed at increasing consumption was put into practice (welfare states) as a result of the class struggle, the colonial rebellions and British imperialism dissolved and replaced by US imperialism. In the extremes of the decade extended until  wind of 68. It is not very difficult to draw a comparison between the 30’s and todaybut let's not make the mistake by saying that their characterictics are the sam. No there are also big differences as well as similarities. In today’s World, China is challenging the USA, but neither its military capacity, political influence nor the limits of its global hegemony show that the China can sezie the top position in the imperialist hierarchy in the short term. The rise of the far right is a possibility. But, at the same time, a stronger possibility than this is a rise of the left: if the radical left can combine with the ability to organize new generations and working class militancy against the system, the situation can reveal revolutionary potentials.

A number of bourgeois economists and politicians act with optimism that everything can recover quickly when the pandemic ends. In particular, they argue that China, which is the largest exporter and intermediate importer of the world alone, may experience a rapid a V-shaped recovery. More pessimistic, however, argue that a U-shaped delayed recovery is realistic.

They have great expectations from China, where the curfew ends and production begins again. However, considering that things did not go well before the virus crisis, this optimistic picture is not very meaningful. Indicators of the USA and Europe also support this situation. January 2020 was a period when the EU grew by 0.1 percent and the USA experience the lowest growth rate since 2016 with 2.1% growth in the last quarter of 2019. The situation of major economies such as China and the USA will be dependent on the course of the pandemic these days when it is said that a second wave of pandemic is also possible. We'll wait and see.

In short, the imperialist capitalist system has not been able to show any signs of salve in all aspects, as well as the signs do not point a recovery in the short term for now. This does not mean that the bourgeoisie is exhausted; revolutions, advances and social gains will be gained automatically. On the contrary, the capitalists are still the master of the world and have many tools to save the day at the cost of the working people. Nevertheless, they are not successful in creating new figures who can suggest a new economic and social model in terms of politics. The rise of the right-wingers happened after 2008. However, those names are also currently being questioned by the masses. If a new era of extremes is on the agenda, the aggravation of the class struggle comes to the fore (which is already on the horizon) and if the revolutionary actors can take the advantages of this process or enlarge their powers to influence the masses in the worst case, then the wheel of history is then possible to re-operate.

After the lockdowns and the pandemic ends, a big wave of class struggle awaits us. Italy is shaken by the deaths, Spain  as Europe's weakest link, the United States in the election process, as Lebanon still ongoing rebellion, with the referendum agenda in Chile, and perhaps even Turkey ... Together we will see where the class struggle will take the stage first.

*The Age of Extremes is the name of the book of Eric J. Hobsbawm who wrote on the 20th century.