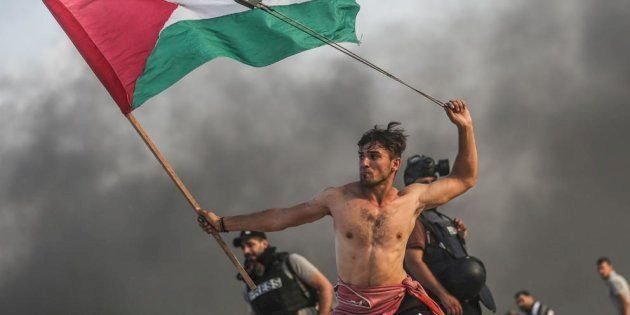 The two rogue states of the world, the USA and Israel, announced the “Deal of the Century” or so called “Trump Peace Plan”, which aims wiping Palestine off the map as a state, destroying the Palestinian people’s right of sovereignty.

As a completion of the process that began with the recognition of Jerusalem as capital of Israel, USA announced the project that consolidates the occupant Zionist dominance over Palestinian land. Politburo official of the PFLP (Popular Front for the Liberation of Palestine) Marwan Abdulal commented on this historical attack: “Trump’s statement has nothing to do with peace, declaring war, not peace.”

These imperialist murderers, who promise nothing but blood and tears for Middle East, propose reclamation of nearly half of the already occupied Palestinian territories, declare Jewish settlements in the West Bank as land of Israel, rejection of the Palestinian refugees right to turn their counrty back
relocation of Palestinians and disarmament of Palestine. Although imperialism proclaims that a new Palestinian state will be established, Jerusalem will be annexed, and Palestine will be transformed into a province “protected” by the Israeli army. While Trump boldly threatens the Palestinian people by saying “This may be their last opportunity for peace”, he does not hide his intention to slaughter them to implement this plan.

The Israeli state, which turned its armed forces over Palestine, is preparing to massacre before the deal is announced. The US-Israel, which envisages 4 years for the implementation of the “Agreement”, will do its best to take over the Palestinian resistance with heavy weapons and suspend all kinds of struggles. Imperialism is responsible for every drop of blood will be shed. Israeli barrels aiming at the West Bank must be withdrawn immediately! Jerusalem should be given to Palestinians back and the Gaza siege should be terminated immediately!

We, the revolutionaries, reject not only this agreement, which means the destruction of Palestine by imperialism, but also the existence of the illegitimate Zionist state of Israel. The state of Israel must be demolished, and Zionism and US imperialism must be defeated in the region for the future of all the Middle Eastern people with Palestinians.

The only real friends of the Palestinian people are revolutionary socialists.

The allies of the US and Israeli imperialism, such as Erdoğan, are only hypocrites who abuse the cause of the Palestinian people and plunder their sources. Israel is a knife which stabbed into the Middle East will be rooted out by the struggle for Socialist Middle East.

The Middle Eastern laborers will get over any kind of sectarian polarization and defeat imperialist capitalism under the banner of the Federation of Socialist Middle East which is also the only way for unconditional recognition of the Palestinian people’s sovereignty and freedom.

From river to the sea, Palestine will be free!

Death to the US and Israeli imperialism!

Imperialists out of Middle East!