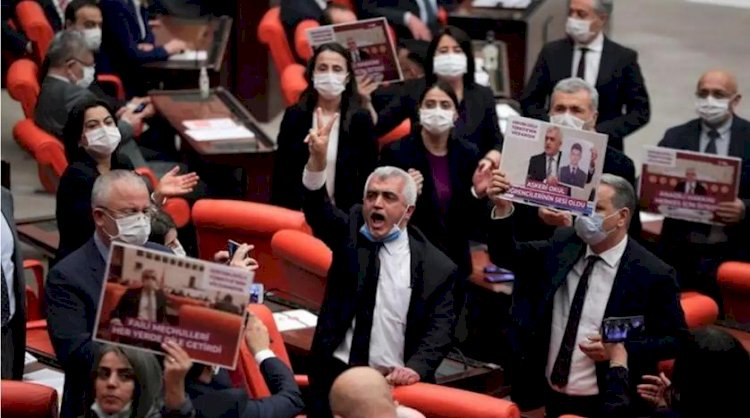 The AKP dictatorship, along with the pro-fascist MHP, attacks the Kurdish people and their political representatives to strengthen their shaky authoritarian regime as in the 90s. First, HDP Deputy Ömer Faruk Gergerlioğlu has been stripped of his deputyship due to being sentenced for a lawsuit filed on the grounds of a news he shared on social media years ago. In the evening, a closure case was filed against the HDP by the Supreme Court Chief Public Prosecutor Bekir Şahin. In addition, a political ban was requested for more than 600 HDP politicians.

Thus, Erdogan paved the way for the political genocide against the HDP, for which Bahceli, the leader of his political partner MHP, has been speaking out aggressively for a long time. The ruling party thus aims to further expand the policy of repression it has been pursuing ny appointing trustees to HDP municipalities and arrests of the opponent politicians for years. It will not be over after the closure of HDP and banning of more politicians. This attack will have effects on all the laborers, the poor and the oppressed identities, who reject Erdoğan's one-man regime. Politically, they are stuck, they distrust the ballot box and seek a way out.

But as the government gets stuck inside and outside, it sees its options coming to an end. The AKP-MHP partnership, which does not want any opposition or focus of resistance, is trying to get what it knows best over the Kurdish issue and HDP, and to save its future by escalating hostility and national polarization among the peoples.

In an environment where poverty and unemployment are at their peak and laborers are pushed into the arms of misery and futurelessness due to the pandemic and economic crisis, the current government cannot find another way out. They dream of a Turkey where the police oppression constantly suppress any protest, freely speaking people are threatened amd. judged, wide range of democratic rights of the oppressed shrunk.

As Socialist Workers Party (SEP) and the ISL, we will declare out internationalist solidarity against the government’s attacks on the oppressed Kurdish people and their political representatives, HDP. It is in our hands not to allow this darkness to become darker any further. We call all working people to struggle to expand democratic rights and freedoms and to raise solidarity.