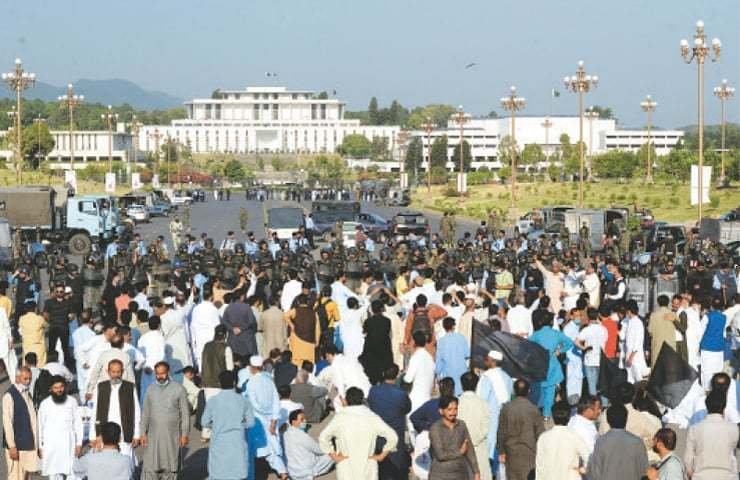 Thousands of workers, government employees and pensioners from more than 61 labour organizations, trade unions and pensioners’ associations united under the umbrella of “All Pakistan Employees Labour and Pensioners Movement” marched towards the Parliament House, Islamabad on 14th October. March was planned on parliament but their way was blocked at the point where rulers and their spokespersons felt that they were getting too close for comfort. A day before the march, Islamabad administration and police sealed off the so-called ‘Red Zone’ and strict monitoring was placed at all entry points to the capital. The state resorted to dirty tactics to sabotage march and stop convoys. To prevent participation, leaders of various trade unions were threatened with serious consequences. On the morning of October 14th, various roads were blocked across Pakistan, at various points, hurdles were placed to stop the convoys from arriving at the planned protest point. At many places, the protestors had to push their way through the police blockades towards Islamabad. Chaotic scenes were also reported at Khyber Pakhtunkhwa Government offices, where police and paramilitary forces, rangers, were deployed to stop employees from leaving. Through notices published in local newspapers, the Government asked the public sector employees to call off their strike action and not to leave their workplaces. Due to these hurdles, many convoys had to leave their vehicles on roads and joined protest rally on foot or by motorbikes. Comrades, militants of the International Socialist League and activists and labour leaders from the different parts of the world expressed solidarity with protesting workers of Pakistan.

Despite all hurdles and threats, thousands converged on the Parliament House. One group led by APCA (All Pakistan Clerks Association) was able to get into the Parliament House Avenue. The Police and paramilitary forces manhandled many protestors and resorted to using force to push back them. At this time, it was decided to have a sit-in at D-Chowk near Parliament House.

The capitalist crisis is unleashing new attacks on the working class and taking everything back which was won over centuries-old struggles. To silence the workers at the start of pandemic, Essential Services Act was promulgated in many public sector institutions including PIA, Utility Stores and others. At the same time, Pakistan’s courts are repeatedly issuing orders against the Unions. Using the pandemic as an excuse, laws are used to curb workers voices. In this background, Pakistan Trade Union Defence Campaign (PTUDC) took to the task of uniting all working-class forces against neoliberal policies of IMF and capitalism. As a step towards workers’ unity, major unions and labour organizations of Pakistan like PTUDC, Peoples Unity PIA, Employees Unity CAA, Trade Union Alliance Pakistan Steel Mills, APCA, Government Employees Federation of Pakistan, Paramedical Staff Association, PTCL Workers Ittihad Federation CBA, PTDC Employees Union, Punjab Professors & Lecturer Association, Punjab Teachers Union, Rail Mazdoor Ittihad, All Pakistan Pensioners Association, PTV Workers, Radio Pakistan Workers, Pakistan Medical Association, Hotels Unions and other 61 unions came together at Lahore on 21st of July to discuss the formation of nationwide alliance against privatization and IMF policies, on 23rd July at a Rawalpindi meeting, an alliance was formed as “All Pakistan Employees, Pensioners & Labour Movement”. The total membership strength compromising all unions is more than four million.

14th October Dharna was an expression of class solidarity and is a strong message to the ruling class of Pakistan that workers are united against draconian IMF imposed austerity. At first mainstream media tried to hide the news of dharna but due to pressure, they were forced to give space to workers’ demands. Daily DAWN, leading newspaper of Pakistan, wrote in its editorial on 17th October;

“It is difficult to recall the last time Islamabad drew this kind of crowd. Thousands of discontented individuals, working for various departments of the Pakistan government and hailing from trade unions and other groups, assembled on Wednesday to protest the scourge of inflation. They planned to march on parliament but their way was blocked at the point where rulers and their spokespersons felt that they were getting too close for comfort. Quite often, these government employees are overshadowed by big files flashed on media, although they have been pressing for reasonable compensation in these times of soaring expenses across the country.”

At this moment there are two parallel movements in Pakistan, one in the shape of Pakistan Democratic Movement (PDM) which composed of bourgeois political parties and the other is in the form of “All Pakistan Employees, Pensioners & Labour Movement” which is composed of the working class. Even PDM leaders in their speeches and press conferences talked about the “14th October Dharna” and urged their supporters to follow workers’ example. The government through its policies and actions, has alienated both its political workers and ordinary masses. The militant participation of Revolutionary Students Front (RSF) and Jammu Kashmir National Students Federation (JKNSF) activists with red flags and furious slogans charged the participants and manifested the great unity of workers and youth and students.

After Government’s assurance to accept the demand of workers, the sit-in was called off. A committee presided by Prime Minister Imran Khan is formed to resolve grievances of the working-class and rounds of negotiations continue. However, we believe the government and this system has left no room for the reforms and have nothing to give to workers and struggle must be continued. This movement has given a tremendous push to working-class movement and for the first time, the scattered demands of the workers from all across the country were presented in the shape of a common charter of demands. As a vanguard of this movement, the Pakistan Trade Union Defence Campaign (PTUDC) will continue to fight for all the workers. Whatever the outcome of the negotiations, the labour movement will continue. 14 October is only the beginning of the joint struggle that continues till the overthrow of capitalism in the region.

Charter of Demands presented to the Government of Pakistan

The Story of Nagorno-Karabakh Fraught with Conflicts- Denizhan Eren

SEP Statement about the Turkish Republic Day: Forward for a Socialist Republic and...