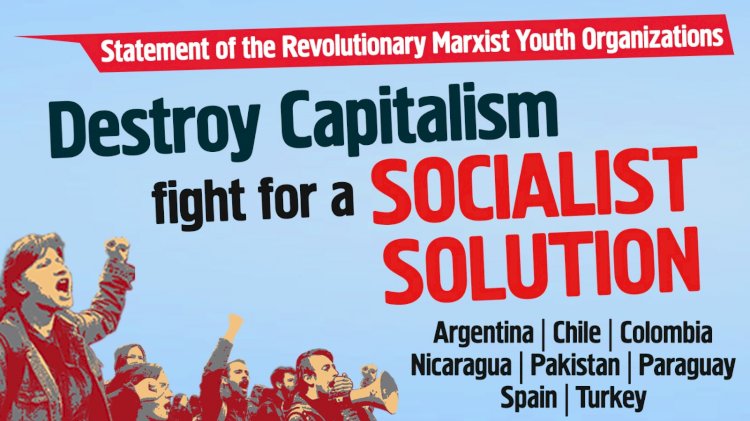 Around the world, the Covid-19 outbreak revealed the dimensions of capitalist barbarism. The propaganda that denies the existence of the working class and its ability to change society has been completely turned upside down. Karl Marx pointed to the hidden nature of exploitation and inequality in the capitalist mode of production, saying, “If everything appeared as it were, science would not be necessary.” Everything is very clear now. Today, it is the working class, especially its health, food, logistics and transportation sectors, that is left in the middle of the epidemic without proper measures to protect their lives. Capitalist barbarism, which has destroyed human society and nature for the accumulation of capital over the centuries, is exposed more evidently by today´s Covid-19 outbreak.

The human cost of the pandemic is highest in western countries, which were showcased as ideal examples of the capitalist system. From the United States and Britain to France and Italy, we see the collapse of developed capitalist countries and the “western democracies” they represent. Under normal circumstances, when the system and production function as usual, exploitation is hidden by so-called democracy. Today it is questioned everywhere. The privatization of the health system in most countries has caused a huge drop in personnel and infrastructure, in favor of the growth of the commercialization of public health care. This turned the epidemic into a global, socio-sanitary crisis with economic and social aspects that, in amplifying previous trends, heralds a magnitude of collapse comparable to the 1929 crisis, a true historical turning point.

Capitalist mouthpieces who had already predicted a recession by 2020 are now saying that “nothing will be the same” after the sudden drop in production, demand and supply caused by the pandemic. The Covid-19 crisis has already shown that millions will suffer from unemployment and hunger in what is described as the biggest recession in 150 years. The IMF, which had forecast that the world economy was going into recession when the growth rate was 2.5%, now expects the world economy to contract by 3% in 2020. The unemployment rate has already exceeded the estimated level, since it exceeds 10% in the European Union and the United States.

The economic recovery packages of governments around the world and the IMF plans are intended to overcome the global crisis and save the system from destruction in favor of the capitalists. As millions of workers were laid off or forced to take leave without pay, billions now face a terrible dilemma: continue to work and get infected or remain in quarantine and starve.

Millions of people who are in the grip of hunger in Africa, Asia and Latin America are worried about basic needs to survive, let alone health protection measures, due to unequal global conditions. Conditions that worsen from one country to another reveal the gap between the poor and the rich not only in terms of access to health care but also in terms of all social rights. The wealthy who contract Covid-19 can access the best health services in private hospitals and provide good conditions to educate their children while schools remain closed.

The situation is even worse for oppressed groups. Refugees who have been left to die at the borders and migrant workers who work under the worst conditions in the dirtiest and most insecure jobs are forgotten in the midst of the pandemic. The death rate from coronavirus is known to reach higher levels among Blacks and Latinos in the United States.

The double oppression of working women around the world, and the different forms of gender violence are multiplied with the pandemic and the capitalist crisis. Unpaid care tasks are amplified, and unemployment among young working women grows. Capital intensifies its aggression against this enormous social sector and we socialists take note to denounce it and organize our forces to combat it.

At the same time, the depredation of nature is intrinsic to the capitalist mode of producing, its basic laws of accumulation, over-producing and promotion of artificial hyper-consumption. At the origin of the spread of the Covid-19 virus (as in other previous cases), the destructive intervention of ecosystems and animal species to obtain profits has disastrous consequences for nature and human health. However, beyond the images of temporary reduction of pollution in regions of the world due to the episodic paralysis of the economy, the reality is that, after the pandemic, the orientation of the world bourgeoisie will resume ecological aggression as part of the quest to reduce production costs. In some regions, extractive plans with mega-mining, fracking and agribusiness are a fundamental part of the corporations' agenda. We point this out as well, as a key task for revolutionary socialists, to raise our program of action for a sustainable relationship with nature.

This system has no project to overcome the crisis in which all its institutions and ideologies have also collapsed. But the ruling class will do everything in its power to prevent the working classes, the youth and the oppressed from turning their anger into rebellion. Lebanese workers raised their class demands and broke the quarantine chanting “Better to die from coronavirus than from hunger.” We can expect that more of these rebellions will break out around the world when the pandemic ends.

Taking advantage of the legitimacy of measures against the pandemic, governments from the Philippines, Hungary, Cambodia, Azerbaijan, Israel, Jordan, Great Britain, the United States and Chile, among others, apply extraordinary measures that allow them to govern with excessive powers and without control for indefinite periods.

In Chile and Turkey, governments seize the opportunity to liberate extreme right-wing gangs, rapists and genocides, and keep rebels, revolutionaries and journalists locked up in the middle of the pandemic. It is not an exaggeration to say that, in liberating genocides and gangs, and reinforcing state repressive apparatuses, the bourgeoisie acts preventively against the rebellions that will come after the pandemic. Trump-backed fascists have already taken to the streets with organized protests in many regions of the United States.

One of the most important reasons for the rebellions that took place in many countries in 2019 was the massive unemployment and the trash jobs that capitalism condemns the youth of the world to. The ILO has already announced that 195 million people have lost their jobs worldwide. More than 22 million people in the United States have applied for unemployment benefits in the past month. These figures are especially crude in the youth. And at the same time, the form of precarious work under the so-called “platform economy” and “telework” that has consolidated since the 2008 crisis, facilitates layoffs. These trends will cause excruciating pains for workers and the youth after the epidemic.

Due to quarantine and social distancing measures, 1.5 billion students in 188 countries are unable to go to school. Education continues with television, radio and internet broadcasts. It is the so-called “virtual” modality that consolidates inequalities in access to technology, a true gap that can only be overcome with state budget investment. Although the educational system is a social right like health, poor children are deprived of this right throughout the world. Especially when we think of the poor countries of Asia, Sub-Saharan Africa and Latin America, there are millions of people who live without drinking water and access to electricity for a few hours a day.

We often hear the discourse that the crisis is being addressed by making adjustments based on scientific indicators and organizing cooperation and coordination against the effects of the pandemic at the international level. It is even suggested that the crisis should be managed by technocratic governments to return to normality. Capitalism has oriented humanity´s entire intellectual accumulation towards its own benefit. Universities, institutes and research centers are limited to an educational process geared towards economically profitable professions. This transformation, aimed at preventing young people from questioning the system and adopting anti-capitalist ideas, became a barrier to the use of science for the benefit of nature and human society. On top of this logic, large pharmaceutical corporations and laboratories do not invest in research for prevention, but profit from the multiplication of diseases. Hence, they are now in a crazed race for the Covid-19 vaccine without collaborating with each other, but competing and hiding information, which slows progress in that effort. States have de-financed all lines of investigation based on the austerity and bank bailout policies of 2008. The ruling classes do not care about ecological destruction or inequality so long as these dynamics do not question their profitability. We need a science at the service of the social majority, for another social model, without capitalist property and nature friendly.

To Turn Everything Around: Socialist Intervention and Organizing

For all these reasons, we know from experience that it is not possible to reform capitalism and establish a fairer world within its limits. No matter how deep the crisis is, it is impossible to achieve structural change without the organized struggle and intervention of workers, the oppressed and the youth around the world. Starting today, we must organize to gain our demands in the face of the epidemic and to establish the power of workers and the oppressed. It is clearly revealed that those who declared capitalism as “the end of history” have totally failed. However, despite all the defamation and distortions, the idea of ​​socialism, which surrounds humanity with hope and courage, is still alive! For all these ideas to become a real power, they must meet the masses and transform into a hegemonic perspective for the majority.

As revolutionary youth organizations from different countries, we declare the demands that we will raise in this process.

To fulfill all these demands, we must be prepared for the days when we will occupy the squares again and build revolutionary political organizations, to fight for governments of those who have never govern, for a transition to socialism with the broadest democracy for working people.

Names of revolutionary youth organizations around the world as below.