Statement of the Socialist Movement of Kazakhstan on the Popular Uprising 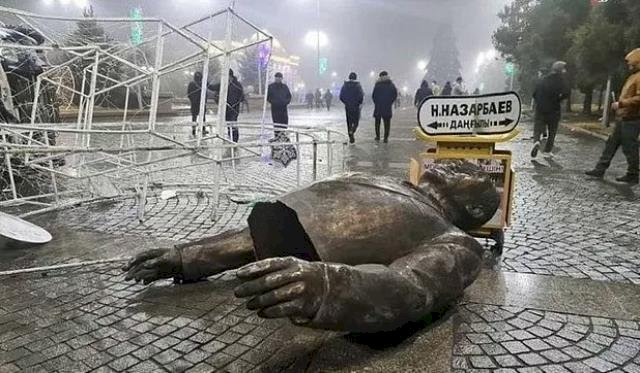 A Russia-led military alliance Collective Security Treaty Organization (CSTO) on Thursday sent its  troops to Kazakhstan, where massive riots stemming from nationwide protests over high fuel prices have led to a state of emergency and the resignation of the government.

The protests broke out on Jan. 2, when drivers in the city of Zhanaozen in the country’s oil-rich Mangystau region staged demonstrations against huge price hikes for liquefied petroleum gas (LPG), which later spread to the city of Aktau.As the protests spread across the country, Tokayev declared a state of emergency in the city of Almaty and the Mangystau region for Jan. 5-19 to maintain public security. He also imposed a curfew in Almaty, the country’s former capital, where thousands of people had taken to the streets.

Supportive protests in the western cities of Atyrau, Aktobe, and Oral, where the country’s petroleum and natural gas reserves are located, spread to other corners of Kazakhstan and turned into mass rebellious demonstrations.

Kazakhstan is one of the former USSR countries which had been led by oppressive governmnets of the corrupted oligarks. We salute the heroic ressistance of the workers and the poor people of Khazakistan.

Socialist Movement of Kazakhstan published a statement about the popular uprising that overthrew the government:

There is a real popular uprising in Kazakhstan now, and from the very beginning the protests were of a social and class nature, since the doubling of the cost of liquefied gas on the stock exchange was only the last drop in the overflowing cup of patience. After all, the performances began just the same in Zhanaozen on the initiative of oil workers, which became a kind of political headquarters of the entire protest movement.

And the dynamics of this movement is indicative, since it began as a social protest, then it began to expand, and labor collectives used rallies to put up their demands for a 100% increase in wages, cancellation of optimization results, improvement of working conditions and freedom of trade union activity. As a result, on January 3, the entire Mangystau region was engulfed in a general strike, which spread to the neighboring Atyrau region.

It is noteworthy that already on January 4, the oil workers of the Tengizchevroil company went on strike, where the participation of American companies reaches 75 percent. It was there that 40,000 workers were laid off in December last year and a new series of layoffs was planned. They were subsequently supported during the day by oilmen of Aktobe and West Kazakhstan and Kyzylorda regions.

Moreover, in the evening of the same day, strikes of miners of the ArmelorMittal Temirtau company in the Karaganda region and copper smelters and miners from the Kazakhmys corporation began, which can already be regarded as a general strike already in the entire mining industry of the country. And there were also demands for higher wages, lower retirement age, the right to their own trade unions and strikes.

At the same time, indefinite rallies on Tuesday began already in Atyrau, Uralsk, Aktobe, Kyzyl-Orda, Taraz, Taldykorgan, Turkestan, Shymkent, Ekibastuz, in the cities of Almaty region and in Almaty itself, where the closure of streets resulted in an open clash of demonstrators with the police on the night of January 4-5, as a result of which the akimat of the city was temporarily seized. This gave reason to Kassym-Jomart Tokayev to declare a state of emergency.

It should be noted that these speeches in Almaty were attended mainly by unemployed youth and internal migrants living in the suburbs of the metropolis and working in temporary or low-paid jobs. And attempts to calm them down with promises, reducing the price of gas to 50 tenge, separately for the Mangystau region and Almaty have not satisfied anyone.

The decision of Kassym-Jomart Tokayev to dismiss the government, and then removing Nursultan Nazarbayev from the post of chairman of the Security Council, also did not stop the protests, since mass protest rallies began on January 5 in those regional centers of Northern and Eastern Kazakhstan where they had not been before – in Petropavlovsk, Pavlodar, Ust-Kamenogorsk, Semipalatinsk. At the same time, attempts were made to storm the buildings of regional akimats in Aktobe, Taldykorgan, Shymkent and Almaty.

In Zhanaozen itself, workers formulated new demands at their indefinite rally – the resignation of the current president and all Nazarbayev officials, the restoration of the 1993 Constitution and related freedoms to form parties, trade unions, the release of political prisoners and the cessation of repression. The Council of Elders was immediately created, which became an informal authority.

Thus, the demands and slogans that are now used in different cities and regions were broadcast to the entire movement, and the struggle received political content. Attempts are also being made on the ground to create committees and councils to coordinate the struggle.

At the same time, troops were pulled together in Almaty, Aktau and Zhanaozen, and if everything went peacefully in the Mangystau region so far, and the soldiers refused to disperse the demonstrators, then skirmishes began in the southern capital, and special forces were introduced on the night of January 5 to 6, which began a forceful sweep of the airport and the neighborhoods captured by the rebels. According to various sources, there are already dozens of deaths on the part of the demonstrators.

In this situation, there is a danger of forcible suppression of all demonstrations and strikes, and here it is necessary to completely paralyze the country with a general strike. Therefore, it is urgently necessary to form unified action committees on the territorial and production principle in order to provide organized resistance to military-police terror.

In this regard, it is also necessary to support the entire international workers’ and communist movement, left-wing associations in order to organize a large-scale campaign in the world.

The Socialist Movement of Kazakhstan demands:

The immediate cessation of hostilities against their people and the withdrawal of troops from the cities!

Immediate resignation of all Nazarbayev officials, including President Tokayev!

Release of all political prisoners and detainees!

Ensuring the right to form their own trade unions, political parties, to hold strikes and meetings!

Legalization of the activities of the banned Communist Party of Kazakhstan and the Socialist Movement of Kazakhstan!

We call on all workers and workers of the country to implement in practice the demand of the executed oilmen of Zhanaozen – to nationalize all the mining and large-scale industry of the country under the control of labor collectives!