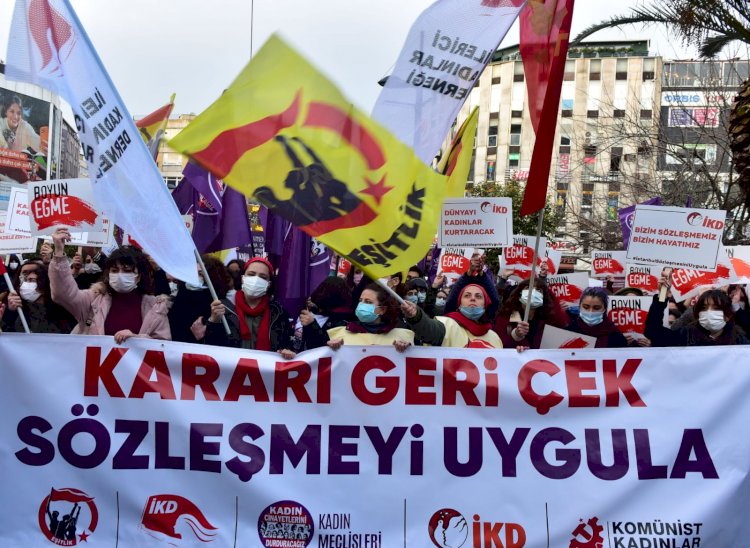 Erdogan signed a midnight decree to withdraw from the Istanbul Convention. He made the decision at the same night he dismissed the head of the Central Bank. The country faced with both a 10 percent impoverishment caused by the dollar shock after the Central Bank decision and a new attack on women's rights. Withdrawal from the Convention has been on the agenda in recent months. The fact that Erdogan withdraws from the Convention at midnight together with another critical decision shows that he is not self-confident about the decision as the surveys show that even the AKP base is in favor of the Convention. There are important points to discuss regarding the timing and content of the decision.

The timing of the decision to withdraw from the Istanbul Convention is closely linked to the needs of Erdogan's government. Erdoğan's popular support and votes are falling as the deepening economic crisis creates the need to find new channels and agendas that will increase his political support. The Istanbul Convention has been the target of Islamist actors (such as Saadet Partisi) for a long time. It is critical to “please” these segments.  This is crucial because  Erdoğan needs more than 50% of the votes to be reelected in 2023. So, whatever he makes is a step to consolidate his power. Support for Erdoğan dropped to 36% and his coalition partner, MHP -fascist party-  has the support of 9.6% that means Erdoğan's position is in danger. So, he needs every crump of votes. So, this critical situation allows far-right small groups to bargain with Erdoğan that makes far-right ideas and misogyny to gain self-confidence. For the day-to-day interests of Erdogan's government, these groups gain influence from their height and gain self-confidence; the country is pulling to the right. Another example of this is the closure case of HDP (Kurdish Party) as a result of the pressure of the MHP. Of course, all these steps are applicable as all are compatible with Erdogan's will to construct an oppressive and conservative society.

The Istanbul Convention was actually symbolic for the government. It has never been implemented. The withdrawal of the signature was a move laden with political symbols. This move should neither bring us to the point of disappointment nor should it lead us to underrate this attack.

We said that the Istanbul Convention was not implemented, but let's not forget: it is difficult to gain rights. The convention has been on the agenda of the country as the achievements of many years of struggles. Yes, it was not applied. Women are being killed because even protection orders were not implemented. Women are being killed hundreds of times by the individuals they file complain about. However, let's keep in mind that police forces or court decisions cannot be at the center of the prevention of violence against women. Prevention of violence happens only by eliminating the social conditions that create violence. For this reason, we have to move beyond this  Convention-based position while waging women's liberation struggle and demanding equality.

Violence is a consequence. The result of what? Social order. This is a result of the role assigned to women in the social order. The confinement of women at home is the result of the system that sees women as free labor to fulfill the requirements of the reproduction of the labor force. That is also the ground where reactionary conservative ideologies stem from. Women cannot make decisions about their own lives, they cannot establish an independent life because the thickest chain of women is made of poverty. Sexist ideas can survive because the bourgeoisie keeps them alive as they are extremely useful and profitable for them!

The spiral of poverty deepens the violence. The conservative program of the AKPimposes the "family" as sacred and imprison women inside the family. The main policy for the AKP government was to play ostrich about the violence towards women, children, and LGBTI. This is also the story of the Istanbul Convention's dusting on the shelf. We gave big struggles to make the murderers, rapists,  child abusers be punished. On the other hand, withdraw from the Convention means losing the existing legal regulation is a serious attack. Of course, there is still a lot to do in the face of this attack. Women will continue to struggle. However, there is a need for an organized force and a political program to transform anger and energy into social change in women's struggle.

The move to withdraw from the Convention encourages femicides and violations. The message of impunity from the top of the government quickly showed itself; in just one week right after the withdrawal from the Convention, 6 women were killed and 1 gay was tortured. It is difficult to get out of this spiral if we do not link violence against women with social impoverishment. We have to demand to go back to Convention, the active protection measures stated by the convention, together with the empowerment of the poor/working woman. We have to raise the demands of socializing all the loads put on the shoulders of women. We have to go beyond the limits of the Convention and fight for rea rights to eliminate violence. For example, demanding wealth tax for a budget to support women to have an independent life, demanding kindergartens, we must demand that shelters be transformed into places where women establish a new and independent life, not where they are hiding/isolating themselves; we must strive to give employment priority to divorced women.

On the other hand, the day after the presidential decree issued withdrawal from Istanbul Convention, thousands of women took the streets, in every corner of the country. So, we clearly see that the women's movement is a strong dynamic to weaken Erdogan’s regime. However, unfortunately, the movement does not have a clear program, campaign, and political influence to stop attacks. The first reason for this is the great hegemony of identity politics that rejects confronting the political Erdogan regime directly and putting the men at target, not the system. So, the big energy of women on the streets is not able to gain rights. So, we have to change this too.

We have social legitimacy and dynamic powers that can gain more than the Convention proposes. This dynamism has serious energy that will enable us to take steps for equality today, right now, and now, and push society in this direction. In fact, we have the power to defeat AKP. We have to aim and worry about a struggle that will touch the lives of poor, conservative women who are the biggest victims of the AKP.

Let's not forget that sexism will not end as long as capitalism survives. Women need a revolutionary struggle to destroy any kind of inequality. We, millions of women, want salvation; that is, we really want an equal and free life. The biggest obstacle to this is capitalism. In this struggle, women should be at the forefront so that our struggle for equality is both a dynamic force in the struggle for social equality and our struggle will be successful.

Our struggle for Equality will keep women alive!

25-year Agreement between China and Iran: Lifeblood for the Corrupt Mullah Regime