The Current Situation in Afghanistan and the Attitude of the Left

Perspectives about the so called "peace" of the US with Taliban and the situation of the left in Afghanistan. 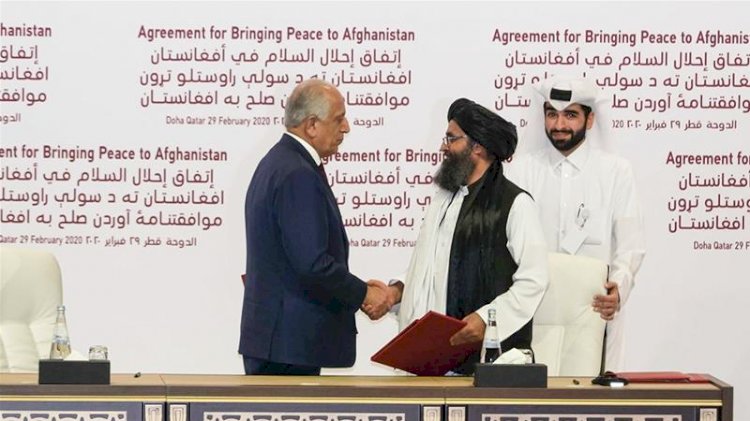 As it is known, Afghanistan has been dragged in a crisis for over 40 years as the last victim of the Cold War. During this time, the Afghan people have suffered from the Russian occupation, civil war and games of imperialism. The great crisis series has made the economy, social and cultural infrastructure of Afghanistan had shattered before, and left nothing but ruin and ash behind. With the collapse of the Left regime in 1992, the country was dragged into a terrible civil war and if we say that this is still an ongoing situation, we would not be wrong. The Jihadist and Taliban regimes that came after the left regime brought such brutality to the people that when the Western powers, especially the USA, occupied Afghanistan after the events of September 11, 2001, the people were delighted and even this situation caused even some leftist intellectuals also agree the occupation.

However, the flow of time has revealed the real and demonic intention of the West in Afghanistan. So much so that Afghanistan, "thanks to the Western Democracy", produces 90 percent of the world's drugs, has the world's most corrupt state, becomes the most dangerous country in the world, etc. . .  On the other hand, along with the “Democracy” and “Freedom” deceit for nearly 20 years, full speed investment was made in radical sectarian madrasahs, and most of the people were even more radicalized than the Taliban period. Disgusting creatures have been brought to the government, but the most murderous, corrupt, barbaric politicians,  who are real puppets of the West, can do anything for their interests. With such strategic methods, Western imperialism must have analyzed the psychology of Afghan society very well that the ongoing turmoil seems to have broken the resistance of the Afghan people. Because the remaining Maoist left, except for a few small organizations, there is no one to break  the silece against injustices, and the people who hardly find a bite of bread to fill their stomach are completely surrendered.

Nowadays, the US and its puppet Afghan Government are making the word “peace” come to the agenda through effective deceit and washing the mind of both the USA and Afghan people with their own media outlets. The USA and its slaves are making such a propaganda  as if the twenty years of turmoil  and all that a bloodbath and everything turns to normal. The United States intends to make peace with the so-called Taliban and assimilate these reactionary elements to the state, or to completely leave the Afghanistan administration to the Taliban. However, anyone who knows just a bit of history can easily determine how funny this initiative is. Today, even a small Afghan child can easily understand who created the Taliban and who fed it. On the other hand, it is quite natural to relate the peace with the Taliban to Trump's effort to enter the upcoming election with an advantage.

It's just like Obama's "killing" Bin Laden, who was fed and raised by them, before the election for his second term. But we have to make sure that even if the USA makes peace with the Taliban, it will create imaginary enemies like ISIS, which it stores in its warehouse in order to sustain its own interests. Therefore, the claim of bringing peace to Afghanistan is just a dream and funny. Only  Afgan people itself can bring true peace to Afghanistan that will come true after the swept of the US and its puppets from the country. Unfortunately, as we have mentioned above, the Afghan people are tired of the crises and for now it seems they have been left everything to time and in a confusion as if they do not have the strength to resist. So a strong commander is needed to guide society properly and awaken them from deep sleep. Here, too, the task is non the shoulders of the left, which is not very effective at the moment, but which can foster the libertarian people's hope.

If we continue with the Afghan left, we can see very strong socialist organizations and even the left regimes that have taken over the state, starting from the second half of the 20th century until the end of the 1980s. Though the USSR played an important role in that period. If we want to talk about leftist organizations briefly, after the second half of the 20th century, two different socialist groups generally emerge in Afghanistan. One is the section that adopts the official view of the USSR and the other is the thoughts of Mao. However, towards the middle of the 1960s, pro-USSR fragments are split into two, and even then into three. But even though they reunite with the attempts of the USSR in 1977, the disintegration does not end. After coming to power, they end their lives with internal quarrels and competition instead of thinking about the fate of their regime and making arrangements by understanding Afghan society. On the other hand, the Maoist section fell into more pieces in the 1960s.

Some even deviate from Mao's path, with a more Afghanized Marxist thought. In fact, there are those who say that atheism can never settle in the Afghan society that makes them use a religious and even sectarian discourse in their political publications. Unlike the general belief that pro-USSR organizations united and came to power with a military coup in April 1978, it was not the radical Islamists but actually Maoist groups. However, in a short time Maoists are suppressed by the USSR-supported regime and dispersed. Most of them are thrown into prison and killed by torture, the rest are either fled abroad or surrendered to the regime and digested into the regime. Nowadays, the left that can make a small voice again is the remnants of those Maoist organizations.

But today, the concepts of communism and left in Afghanistan are words that can be called taboo in society. The pro-USSR Democratic People's Party, which remained in power for 14 years, had made such mistakes and wanted to impose facts that they were alien to the overly sectarian Afghan society, which seems almost impossible for communism and socialism to see empathy in society now. The politically inexperienced leaders of the Democratic People's Party of Afghanistan tried to doit in two or three years , that the Soviet Communist Party could not do in 70 years. Therefore, the coup was to the left and the Democratic People's Party of Afghanistan more than the radical Islamists. To blame someone today, it seems enough to accuse him of being a communist. As a matter of fact, Maoists are aware of this and are now avoiding calling themselves leftist or communist, and as we mentioned above, they go out into the society with an Afghanised version of Marxism.

However,  imperialism extended its claws to every corner of Afghanistan, the most jihadists who fought against the USSR were in power, the puppet Afghan technocrats who came from the West after the invasion, and reactionary and wild organizations such as the Taliban-ISIS have considerable powers. Considering these facts,  unfortunately it does not give much chance to challenge for the remaining small left group. On the other hand, it is important to express some weaknesses of this left group. First, the elderly and formerly struggled during and before the USSR invasion still could not get out of the borders drawn by the Maoist view  thah make them trapped and unable to go a step further. Still, they try to solve everything with the Maoist ideas.

However, as we have mentioned, it is necessary to analyze the Afghan society well, to solve it and to draw politics accordingly. On the other hand, young people who have grown up in the period of US "Democracy" are so lacking and lax in terms of party discipline that they cannot go further than throw a few slogans on social media. Many of the left parties do not even have the habit of reading that is a very fundamental issue. After reading two or three articles, they seem to be leftist. On the other hand, no matter how much they count on the US and Western imperialism in their writings and social media, they  do not want the USA and its allies leave Afghanistan because if the USA leaves, (they think) the US do it  by releasing the Taliban, ISIS and Jihadists to keep the country under control. In addition, considering the fact that the party discipline of this left organization is loose and its income source is quite limited, many members of the organization have to work abroad to ensure their livelihood and help their family, that inevitably causes the organization to work slowly and ineffectively.

As a result, the Afghanistan crisis seems to continue for another long period. Also, Trump  can suspend the Taliban and the Peace plan when if he thinks it is not that beneficial enough. Or, if he makes peace, he will take another criminal organization out of  his cellar and will not miss the chance to substitute Taliban with another imaginary enemy. Another issue is that the USA will not leave Afghanistan easily if there is no major change worldwide because the USA did not come to Afghanistan that easy.  The US has planned for the invasion since the 1980s, created organizations such as Mujahideen, Taliban and Al Qaeda to break the resistance of the Afghan people by spending billions of money and even did not hesitated to target their own land in the events of September 11. In addition, it will not give up drug bussiness with an annual income of 80 billion dollars until it shifts this traffic to another country. Lastly, the US will also not abonden Afghanistan's hidden rich resources. Therefore, the US will never realy leave Afghanistan in any case and will continue to exploit the Afghan people. Left organizations will also achieve no positive gains if they continue in this way, but they will account for the libertarian people. However, as a general situation, the Afghan left or the people seem to be very helpless and drifting in turmoil now, but it is still hoping that a major change will occur soon, but it still remains. One day, the anger of the libertarian Afghan people will explode, and then neither imperialism nor its puppet traitors can stop this flood of anger.