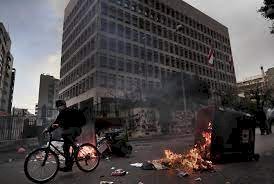 Since the start of the popular uprising on the 17th of November of the year 2019, the popular demand was a transitional government consisting of people not aligned with the ruling class with the mission of stopping the economic collapse. But neither the uprising, nor the suffering of the poor in light of the deepening collapse, nor even the port explosion on the 4th of August was enough to change the Lebanese political authority's conduct. In effect, and despite the accelerating economic and social collapse, the Lebanese ruling class is continuing with its classic practices, namely its arrogant demeanor, and the inner fighting between its factions over their Parliamentary stakes, which is glaringly apparent in the fight over the formation of the government between Saad Al- Hariri and Michel Aoun, not batting an eye over the struggle of the poor in the face of hunger and disease in light of big shortages in the supply of medicine, or over the humiliating daily gas station queues with cars lining up in hoards to get a drop of fuel.

Indeed, the ruling class was explicit when it spoke through the words of the caretaker minister of energy Remon Ghajar saying that "whoever cannot buy fuel after the lifting of subsidies on it comes into effect has to find alternative means of transportation"! ( in Lebanon there is no public transportation to speak of, and the people have to rely on private cars or taxies of which fees go up with the price of fuel), meaning that the ruling class explicitly, and is in alliance with the mafias of capital, had put the poor class at the mercy of these mafias, especially after the lifting of subsidies that are happening concurrently with monopolies becoming more rampant! In other words, the ruling class literally put the people under siege! So the people are surviving the only day by day right now, so much so that if a poor person decides to take to the streets and protest the conduct of the ruling class for only one day, this would mean that their whole family would have to go hungry for that day. The ruling class has managed to impose a new equation: "either compliance and silence, or hunger". And while the poor class dwells in the cycle of pursuing food enough for the day, the parties composing the ruling class have been given the space to use the streets through their supporters, to deliver political messages between themselves In light of their political struggle against each other.

This might in the ruling class' conduct is rendering it blind as to what the upcoming stage will hold. Given that this silence that is imposed in this equation won't last for long! And it will turn into an explosion more powerful and more impactful than that of the nitrates in the port. Indeed, it had skipped the mind of Raymond Ghajar, when he said that "whoever is not able to buy fuel has to find an alternative method of transportation", that people have actually started to develop alternatives means,  we're not talking dragging donkeys and horses as means of transportation, we're talking instead about a type of conduct that the poor will pursue to get their needs. And this conduct is actually materializing in two forms of behavior: the first one is armed disputes at the steps of gas stations which are beginning to occur on a daily basis, and the other form is the seizing of delivery and distribution trucks containing essential items by people and distributing their contents to passers-by.

These two forms of behavior give us a glance at the features of the upcoming explosion. And if the first form i.e. the armed disputes manages to grow, the explosion will be in the form of a security breach, and since the factions of the ruling class have the arms and the money, they would be able to tighten their grip under the pretense of self-security, which will put us at the door of a civil war between regionalities. On the other hand, if the second form of behavior manages to gain traction and especially in light of the accelerating rise in the cost of living, the explosion will come in a popular form and will put the poor class in a direct confrontation with the ruling class and its policing bodies, and with the monopolizers and the profiteers.

And the struggle against the ruling class in Lebanon was always akin to walking in a landmine.

From the start, we had called for a transitional government consisting of people not aligned with the ruling class with its goal set at changing the path of the monetary and economic policies that landed us in this collapse. We also proposed an urgent economic plan with clear goals to fulfill this end. And we're confident that this proposal will only be realized by exercising pressure and the utilization of the political powers behind this project.

In conclusion, we conceive that our interim role is to block any form of sectarian disputes and to reach out to all the forces of revolutionary opposition to form a unified block of which the mission is to publicize this proposal in popular ranks through meetings, discussions, propaganda, and demonstrations, for this proposal to become the proposal adopted by the populous upon the popular explosion.

The structural contradictions of the Lebanese system of governance make its collapse inevitable.

That's why we're directing our forces to ensure that it doesn't collapse over the heads of the poor, and instead turn this collapse into an opportunity for radical change.

The final way is to defeat the imperialism that sustains this sectarian system in the Middle East and to make the socialist Middle East perspective dominant in the whole region.