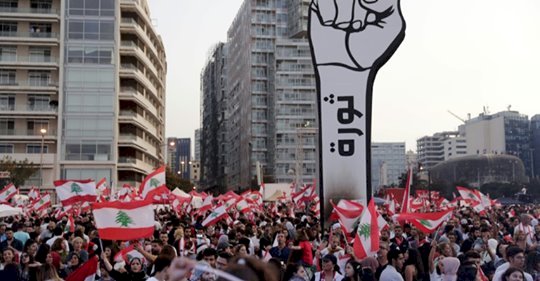 The revolt of the working people and youth againt the corrupted system has been continuing in Lebanon since October 17. While the Lebanese bourgeois political order, which was shaped according to religious segregations, is completely rotten, Lebanese youth could not tolerate it any more. Lebanon has been shaking since the youth, which is in the spiral of high cost of living, unemployment and futurelessness, have started a rebellion against the corrupt order. The government led by Prime Minister Saad Hariri, who is the a pro-Saudi politician and a leading figure of the Lebanese oligarchs, resgined soon after the anger took streets . Now, after 3 months, a new government is being formed but system and the parties are the same… It is not even possible for the activists to settle down because the government has been formed, but on the contrary, the establishment of a similar government that will tell the same stories and rob the people that can only incite new protests.

While the masses are struggling for a radical change, the corrupt order in Lebanon remains as it is. For this reason, the movement of Lebanese working class and youth does not retreat, while protests are expected to settle down over time. Meanwhile, the robbers of the bourgeois order got nervous and increases the violence against the protesters in recent weeks. President Michel Aoun, one of the dirtiest names in the corrupt order, called the army and security commanders for the task, bring “peace” backin the center of Beirut, where security forces and protesters clashed the night before. Due to the intense violence used by the police and soldiers on the streets, there is a serious increase in the number of detention and injured people. In addition, there are cases of torture of protesters who were taken to secret detention centers. The main purpose in increasing the level of violenceof the bourgeois state apparatus is to intimidate those who participate or will participate in the protests.

What bothers Lebanese capitalists and bourgeois politicians the most is that the actions target the banks. While the activists emphasize the radical change demand in Lebanon with the slogan “all must go”, they also show the biggest anger against the banks they identify with corrupt order. Although activists are mostly unorganized, there is tremendous anger against capitalists and bankers. The political elites of the religious communities and the capitalists are all at the target.

Socialist organizations such as the Youth Movement for Change within the youth movement are making great efforts to further radicalize and massify the protests. As a result, some of our comrades were detained and seriously injured. We salute their heroic resistance and wish the Lebanese labourers and the youth to make a progress in a socialist route.