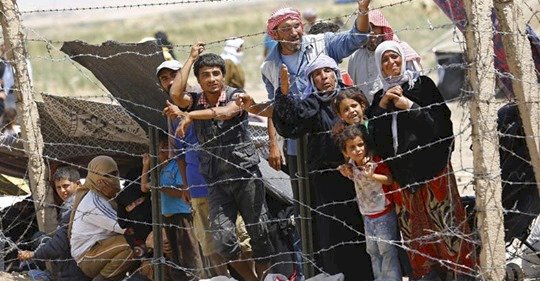 The Palestinians calls the founding of Israel on May 15, 1948, as the “al-Nakba” means “the Great Disaster”. Hundreds of thousands of Palestinians were forced to migrate after that day and have never been able to return their home. The pressure on the Palestinians increased after every war with Israel…
The Kurdish people in Syria thought that a new era had begun after the start of the civil war, but imperialist balances turned optimism into a nightmare. Imperialists supported the struggle of the oppressed peoples to the extent that they benefit. For example, Stalinist USSR, was the first state to recognize Israel that sold out Palestine in 1948. Today, the Kurdish national movement relied on the US in vain.
It is the Nakba of Kurds, because the consequences of the war will be long-term and dramatic. Since the disproportion between the forces and the diplomatic balances are obvious, there is little room for a different possibility in the conflict.
It is not possible to know the bargaining between Erdoğan and Trump, but it is said that the M-4 highway, which crosses northern Syria, will be the new border. This would mean the formation of a new 30 km deep belt, which the Erdoğan has mentioned a lot. This means the transition of the cities such as Kobane, Tel Abyad, Serekaniye, Qamishli, Manbij, Derik, the strategic cities of the border, to the administration of AKP and his collaborative jihadist organizations. This situation means;

If these possibilities are realized, the role assigned to YPG will be to guard the region in the name of the US strategic interests. Balances will determine whether the YPG will agree this. The alternative of a conflict with the US is getting closer to the Assad regime, but Assad will first need permission from Russia. Russia will determine its position by looking at AKP-US relations.
The biggest problem between these two former partners was the Kurds. Since, the USA, gave Erdoğan what he wants with the last operation in Rojava, we can now expect to enter the recovery period of the Turkey-US relations. In this case, Russia could also put pressure on Erdoğan about Idlib and seek to improve its relations with the Kurds. In this case, Assad may attempt to cooperate with the YPG. But in any case, it will not be easy for Turkish Armed Force (TAF) and Free Syrian Army (FSA) to withdraw from the 30km corridor on the border and Afrin. As long as the AKP is in power, it will not quit supporting to establish an informal state, changing the demographic structure and nurturing jihadist organizations in the region. If there a political power change in Turkey, only then, Assad would hope a step back from Ankara and leave Northern Syria (as remain free from YPG) to Damascus.
There is no doubt that the AKP has made good use of the opportunities that emerged in the last period of the Syrian civil war and hit the jackpot. Erdoğan who has been struggling with economic difficulties, experiencing a severe local election defeat, incapable of stopping his downward popularity and hegemony, and struggling against the new threats raised by the ones who left his party, now took the chance to overcome his weaknesses in the country with a military operation in Rojava. He also had the chance to flourish himself as a “national leader who crushed his separatist enemy with a cross-border operation” on the southern border of a state, which is afraid of a division since its establishment. Erdoğan’s prestige as national chief who does what he says, demonstrates his determination, imposes his own rules on the USA, which is the world’s biggest power, and ultimately takes what he wants, is on the rise. The CHP-HDP-İYİP opposition bloc has cracked, authoritarianism has risen again, and the social agenda has changed completely.
However, despite the nationalistic delusions of the AKP government, there is no such chauvinistic atmosphere on the streets of big cities. Everyone who speaks except HDP has joined the choir of chauvinism, but appearance is deceiving. The rooted oppositional attitude in the society is so strong that the AKP dictatorship is not likely to erode that easy. We have seen in previous experience that Erdoğan’s social support reached its limits. Erdoğan achieved a great story on behalf of himself, but this did not coincide with a significant increase in public support for the AKP. There will be only a temporary relief for the AKP. When this process is over, the chauvinist hysteria will be left behind, just like after two cross-border operations in Syria.
Turkish laborers must learn to listen national and democratic demands of the Kurds. What chauvinism offers to the workers is more enmity among the brotherly peoples, relapse of identity conflicts, greater poverty, futurelessness, unemployment and more workplace murders.
The freedom of the Kurds is only possible with a unified class movement that attacks imperialist capitalism and attacks the established order altogether. The history of the national struggle of Kurds over 100 years has also shown that the oppressed cannot be liberated depending on the imperialist forces. The same is true for Palestine. Workers and the youth have all the things we need for an internationalist struggle for socialism in Turkey, in Kurdistan and all over the Middle East. The oppressed have the right to resist and of course it is legitimate, on the other hand, experiences have shown many times that identity-based struggles are a dead end for all peoples