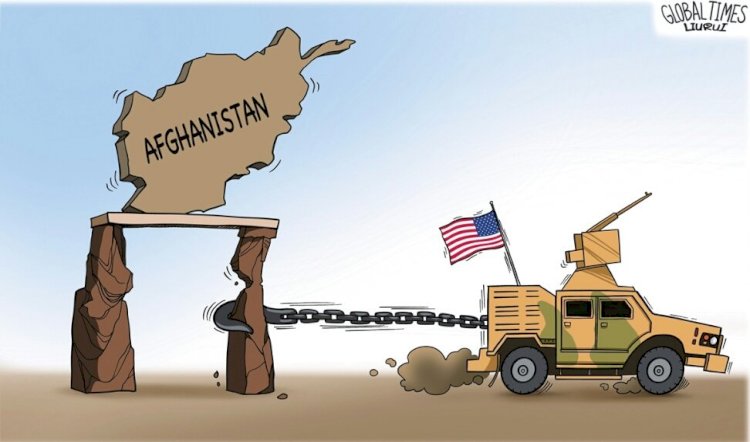 Today is September 9, 2021. Exactly 20 years ago, on September 9, 2001, two Al-Qaeda members, who introduced themselves as London-based journalists, killed the warlord Ahmad Shah Massoud, who was fighting the Arab terrorist Taliban, in the district of Hodja Bahavuddin in Tahar Province. What a coincidence that two days later, on September 11, 2001, al-Qaeda hit the Pentagon, the heart of the USA, and the twin towers in New York, thus a very good excuse was produced for the USA to invade Afghanistan. If Ahmad Shah Massoud had survived that attack, perhaps, the September 11 attacks would have been delayed or put aside altogether. Because Masud was the only person in Afghanistan who could stand against the US invasion plan and cause trouble for the US, so he had to die before the invasion. So who was this Ahmed Shah Massoud?

Born in the province of Pancshir, Ahmed Shah Masud went to Kabul for higher education after his graduation. While studying engineering there, he met extreme religionists and made friends with people like Hikmatyar. In this period, which coincides with the time of Daoud Khan, his name is involved in some extremist religious groups that rebelled against the state. As a result of the state pressure, he fled to Pakistan without completing his education. There, he joined the groups that were only just beginning to spread, that emerged with the initiatives of the Pakistani intelligence service ISI and the CIA, which would later become the Mujahideen, and received military and political training. He returned to the mountains of central Afghanistan before the left-wing coup took place and joined several unsuccessful armed rebellions. When he couldn't get what he wanted, he fled to Pakistan again. After the coup of the pro-USSR leftists, he returns to his birthplace, Panjshir Valley. There, he cunningly killed Pahlavan Ahmed Jan, an intellectual who was organizing the people against the new regime, then took his place, and began to gather extremist religionists around him. Meanwhile, the Soviets invaded Afghanistan, and just like other Islamists, Ahmad Shah Massoud did not fail to receive weapons and material aid from the Western and Arab World. Despite the Soviet soldiers' repeated operations in the Panjshir Valley, Ahmad Shah Massoud successfully repulsed these attacks with guerrilla warfare and gained fame; He started to be known as Pancshir the Lion (Shir-i Pancşir) by followers. In the mid-80s, he took advantage of the US's Stinger Missile generosity and got the edge over Soviet helicopters and warplanes. With the Soviet withdrawal from Afghanistan, he made a non-aggression pact with Moscow but continued to take orders from Islamabad until the collapse of the Leftist regime in 1992 (1). However, after the collapse of the leftist regime, he realized that he had been deceived thanks to the attempts of a few intellectuals around him; he took a stand against Hekmatyar and Pakistan. Civil war broke out in the country and Kabul was destroyed by 1996. Ahmed Shah Massoud, along with Hekmatyar and other groups, did not hesitate to commit terrible massacres. In fact, he is directly responsible for the Afshar Massacre, in which thousands of Shiite sectarian Hazaras were killed. Until 1996, 65-75,000 civilians were brutally murdered. Ahmed Shah Massoud is as responsible for these murders as Hekmatyar, Abdul Ali Mazari, Dostum, and other factions. However, his stance against more fanatical groups such as the Taliban made people forget the murders he had committed. On the other hand, he stopped another plan of the USA and the West. As it is known, Tajikistan was dealing with a civil war in the 90s. On one hand, Imam Ali Rahman, on the other hand, Islamist groups were fighting for power among themselves. At that time, Ahmad Shah Massoud, who was also a Tajik, prevented the extremist Islamic fanatics from entering Tajikistan, which displeased the West and the USA, and they sent forth the Taliban to the region to eliminate Ahmad Shah Massoud. Massoud retreated to the Panjshir Valley again and prevented the Taliban from approaching the Tajikistan border, improving relations with Central Asia and Russia. So the USA developed a new plan. Even after destroying Massoud, he felt the need to invade Afghanistan because he knew that groups such as the Taliban and al-Qaeda could not approach the Tajikistan border with Russia's attempts. The September 11 attacks made this happen. After invading Afghanistan, he opened madrasas that would raise fanatical religious believers in the northern regions of the country and invested millions of dollars for this cause. On the one hand, it seemed to bring modern civilization to the cities of Afghanistan, but on the other hand, it completely turned the North of the country into another Waziristan. So much so that the peasant people living on the border of Central Asia emerged as more fundamentalist than the Taliban of the 90s. In addition, during these 20 years, the USA either killed Masoud's close men, who could stand up to the Taliban and terrorist Islamists again or made them a part of the puppet regime that collapsed on August 15, making them individuals who could not be trusted by the public, and whose names were involved in hundreds of corruption. Therefore, the long-term plan of the USA has been working smoothly until today.

But, along with the Taliban group, Russia, China, and Central Asian countries are probably aware of the above. The Taliban knows that if they loosen things like human rights or women's rights and don't act as they did in the 90s, they will lose most of their militants to ISIS. That's why they have been harshly suppressing the week-long protests organized mostly by libertarian women. On the other hand, China and Russia, the rivals of the USA and Western countries, are also clinging to the Taliban with all their might to prevent the growth of ISIS. If the Taliban does not act in accordance with the West's will, it will face huge sanctions and cannot cope with the already shattered economy of the country and will have to make big concessions to China, which has come to the fore as the new superpower. For this reason, they may even give a military base to China on the territory of Afghanistan (There is already a rumor circulating about that). But, as mentioned above, if the new regime frees women's rights and human rights even to a limited extent, ISIS will become stronger, the country will be dragged into civil war again, and it will drag Central Asian countries, China and Russia into this fire.

Therefore, the people of Afghanistan must be prepared for the new game of the USA. Especially, the Left and the Intellectuals should draw a new path and strategy, even if it is long-term, and take advantage of the opportunities to see the country get out of the turmoil. With protests, even on a civilian scale, they should, as much as possible, stand against the reactionary groups and not make any more concessions to them. Because socialism in its true sense remains the only remedy for freedom and humane life, and there is no other alternative.