Turkey’s New Operation to Syria and the Kurds 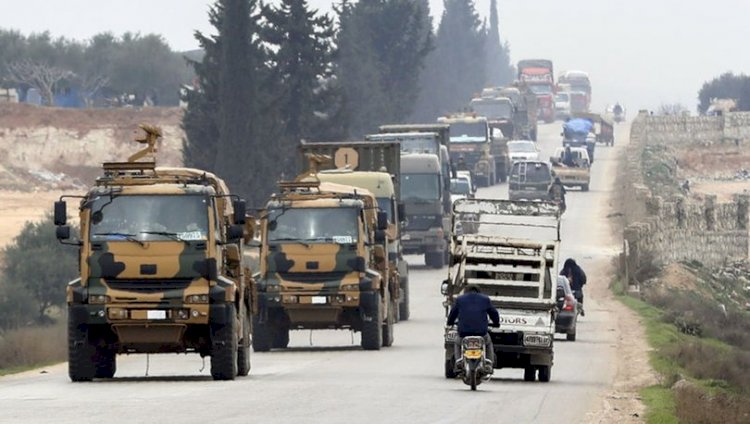 The conditions could not have been more favorable for Turkey’s other operations in northern Syria. Russia is struggling with embargoes while trying to advance village by village with all its might in trench warfare in Ukraine. The United States, on the other hand, has to negotiate with Erdogan and give something in order for Finland and Sweden to become members of NATO. Moreover, Turkey's attitude, side, or neutrality in the Ukraine War is also important for the warring forces.

Of course, Erdogan wants to seize this opportunity. Because while AKP regularly suffers from a loss of voter support, victories in Syria can at least stop the bleeding. Moreover, absurd promises such as Syrian immigrants can be settled in the lands to be acquired can be used for the elections. In this way, the AKP can avoid being stuck on the issue of Syrian immigrants.

But the situation concerns much more than the electoral balances in domestic politics. A new invasion of Syrian territory will have long-term consequences. First of all, what remains of Rojava will be hit hard, and the last national achievements of the Kurds will be largely destroyed. YPG will be driven into deserts. Considering that the population is concentrated in cities such as Qamishlo, Kobane, and Manbıj close to the Turkish border, the meaning of being driven to the deserts is better understood. Moreover, wars also mean changing the demographic structure. The consequences of this are vital for the Kurds and the issue goes beyond the AKP. Even if Erdogan leaves in the election, those who will replace him will not open up space for the YPG, but in the best case, the Syria policy will change in favor of Assad, and the BAAS regime will not leave any room for the YPG. But the situation becomes more urgent for the Kurds, as Free Syrian Army (FSA) domination means a kind of ethnic cleansing.

After the FSA captured Afrin with the Turkish Armed Forces (TAF) operation, the Kurdish population in the region had to migrate largely. Now, a similar situation may be in question in places where Arabs and Kurds live mixed, especially in Tel Rifat and Manbij.

AKP has a dream of being permanent in the occupied regions. We remember that the AKP almost shielded the FSA in order not to leave the Idlib region, and this led to Russian attacks that cost the lives of dozens of soldiers. After all, after the Syrian Army had barely opened the Hama-Aleppo road due to the pressure of the TAF, it had to stop at one point and could not advance to Idlib. Moreover, the transfer of Turkish public services to FSA regions is another manifestation of the effort to be permanent.

The Damascus administration is waiting for a change of power in Turkey to regain its lands. Because it is not possible to strive for Idlib without Erdogan's departure and it is not possible to clear other regions before Idlib is captured. Nowadays, the situation is the opposite. The one preparing for the operation is Erdogan. And this planned new operation to Syria worries Damascus as much as the YPG. Because the Syrian Army is present at strategic points such as Tel Rifat, Manbij, Kobane, Ayn Issa, and Tel Timr, which will be the first targets of the TAF. It is clear that Erdogan will not hesitate to crush the Syrian troops when he has the opportunity. In this way, the conquest operation will be more ostentatious. When we look at the military balances, neither the YPG nor the Syrian Army has the power to repel the TAF operation. Since the infantry leg of the operation will be formed by the FSA, which uses the name of the Syrian National Army, the issue of military casualties will not be of great importance for the AKP.

What will the USA and Russia do?

Can the US and Russia say stop to Erdogan? Last year, when Erdogan said “we are entering Syria”, Russia and the new Biden administration had taken a clear stand against a possible operation and the plans were canceled. But this time, the conditions are different and very much in favor of Erdogan. Erdogan is also showing his determination by announcing the operation he is planning to carry out. He does not need secrecy because he thinks that he has military strength if it's on the battlefield. The main thing is to get approval from Russia and the USA. For this, he needs to create pressure, and to do this he increases the tension, thus forcing his interlocutors to withdraw in negotiations and wanting to get what they want.

In the east of Qamishlo, the USA holds the Iraq-Syria transition zone and the oil fields there in the triangle of Iraq, Syria, and Turkey. The USA has also withdrawn from other parts of Northern Syria. In a sense, regions such as Tel Rifat, Manbij, and Kobane were abandoned by the USA as areas of Russian influence. These regions are the main targets of the possible operation.

Russia may see Erdogan's move as a kind of opportunism and make countermoves. It is possible to see the messages sent by Russian planes in the field already. When we look trump cards of both parties, Turkey has the advantages created by the hard situation of Russia under the embargoes. In addition, Russia's military presence on the land is at a symbolic level. On the other hand, the TAF build-up and FSA presence is a power factor in itself. Even if Russia only uses its tourism card, it can hurt Erdogan so much that we are talking about an AKP that is unsure of what to do because of the shortage of foreign currency. And, there are as yet unconfirmed claims that Russia is preparing to shift its weight in Syria to Ukraine, which no doubt encourages Erdogan.

Russia will direct the YPG to an agreement with Assad. Otherwise, they will emphasize that the Afrin scenario will come true. Accordingly, negotiations with Erdogan will take shape. Russia will set its game plan accordingly. The United States will warn the YPG not to come to such an agreement. But the USA has no concrete steps to take, for example, for Kobane.

After all, the revolutionary attitude is based on defending the existence of the national and democratic rights of the Kurds in Syria and opposing any intervention in Syria. The final solution will not be within the borders of imperialist capitalism. Without socialism, it is impossible to get out of this hellish swamp where peoples in poverty slaughter each other, different imperialists play with people's lives, the one who takes power does not give the other side a chance to live, and ethnic and religious wars never end, and extremist religious organizations swarm. The socialist struggle that goes beyond borders, the unity of the working people, and internationalism is the only way out of this darkness.