United States: The End of Sanders' Campaign and the Need for Strategic Discussions 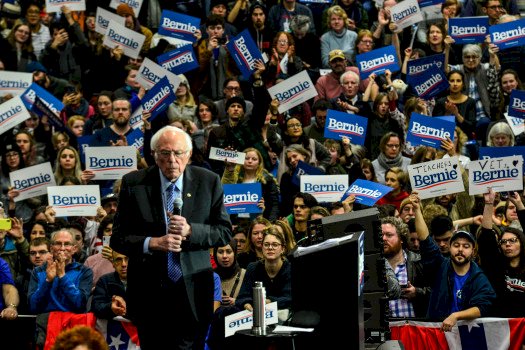 On April 8 Bernie Sanders announced the end of his campaign and a few days later made a public video call with Joe Biden announcing his support for the latter, who is now in fact the Democratic Party’s nominee for the November presidential election. The end of a presidential race that marked the last five years of US politics opens important debates within the left about strategy and tactics for socialists in the United States. In this article we want to make a first contribution to them.

After a promising start for Sanders in the first primaries of the year, including a strong win in the state of Nevada, the Democratic establishment closed ranks behind Biden. Super Tuesday practically closed any viable path towards the nomination. With the Covid19 crisis advancing, the establishment increased pressure on Sanders to drop out and pave the way for Biden. And he finally gave in. Sanders dropped out at the moment in which the crisis triggered by the Covid19 pandemic shakes the foundations of the US. Paradoxically, his campaign ends when the main elements of its platform, such as Medicare for all, gain increasing relevance and social support.

This reminds us of the 2016 outcome. However, its effects on debates within the left are greater than four years ago. Then, the possibility of reaching the 2020 elections with greater recognition, structure and financing, covered strategic discussions with a prospect of rapid results. In the current absence of such perspective, the discussions become urgent.

Sanders and the Establishment

The call for a political revolution together with an economic program that advanced popular economic reforms made the Sanders campaign a platform under which the hopes of many for structural change coalesced. It reflected and expressed a mood of political radicalization brought about by the 2008 crisis and the relative upsurge in class struggle and mass social movements that followed.

However, it always had clear limits. Most importantly the fact that it developed through the Democratic Party. This is not an abstract debate, but one with clear consequences that have once again surfaced since Sanders dropped out of the race. A campaign is not in itself a movement. This requires an independent, organized and democratically accountable structure. The lack of an independent party meant that none of this was guaranteed. This has become evident with Sanders decision to drop out and endorse Biden. The movement was not called to discuss either decision or the steps ahead.

But it´s not only a matter of democratic debate and accountability. The Democratic Party cannot be transformed into a vehicle of progressive social change. It is deeply rooted in the ruling class, of which its political establishment is a part. That is why it was so willing to close ranks behind a neoliberal candidate accused of sexual assault, who also generates no enthusiasm, in order to cut off Sanders´ run.

The Sanders strategy of “realignment”, that is, trying to push the Democratic Party to the left and ultimately capture it, is not only a dead end. It inevitably pushes forward a path of increased compliance with the logic imposed by the democrats such as appeals for moderation and “party unity”. This explains why Sanders gave in to mounting pressures to drop out and endorse Biden. And why he has followed that by openly criticizing those amongst his supporters who would not follow suit. By doing so he adapts to the logic of lesser-evilism pushed by the democrats. As Antonio Gramsci said: “The concept of lesser-evil is a relative one. (…) Every major evil becomes the lesser-evil relative to another that is even greater, and so to infinity. It is therefore nothing other than the way in which the process of adapting to a historically regressive movement unfolds”[1].

Triumphalism, defeat and shift to the right

The political evolution of part of the left has paralleled this process. After winning Nevada, Jacobin magazine published an article that proclaimed triumphant “It´s Bernie’s Party now”[2] in reference to the Democrats. Its authors analyzed how the Sanders campaign was building a coalition strong enough to defeat Biden and win the presidency.

A clear conclusion stemmed from the analysis: it is neither necessary, nor desirable at present, to build an independent political party. Thus, the “dirty break” strategy was giving way to the idea of the “surrogate party”. The first argued support for Sanders’ candidacy (and in general the use of the democratic ballot line) as a tool to organize the critical mass needed to build a working-class political party, with the a break from the Democrats in a close horizon (albeit in some of its versions, postponed to an uncertain future). The “surrogate party” line, instead, emphasizes that energy should be focused on the task of running candidates using the democratic ballot line with an auxiliary “independent” organization structured around this task, rather than consolidating a third party with its own identity and structure.

The defeat on Super Tuesday deepened this shift even though the weight of the Democratic establishment had proven the limits of a strategy focused exclusively on nominating candidates through their ballot. Dustin Guastella proposed the following: “the post-Bernie organizations need to combine their efforts and unite around select congressional and state legislative races to start to build a real bloc of lawmakers. This is doable, but it requires rejecting the fantasy that now is the time we all throw ourselves into third-party work or militant protest activity (…) The Democratic ballot line affords us legitimacy and access to a mass base, and we cannot afford to abandon the tactic of using it because we are upset with the party.” [3]

The orientation is to conquer legislative spaces. For which, Guastella argues, it is necessary to set aside the construction of an independent party and to avoid shifting focus to militant protest activity. It is not surprising that the article ends up arguing for a program centered around immediate economic demands, abandoning the most radical aspects which are deemed as “fringe”.

The end of Bernie’s campaign deepens these discussions. The general take of the various articles published by Jacobin can be summed up in expressions such as “we’re not yet strong enough to stop using the Democratic ballot line any time soon”[4] and proposals for the movement to prioritize the task of choosing “new Bernies” to Congress, of course using the Democratic ballot, to accumulate strength to be able to take the fight back to the national level in about 20 years. Connor Kilpatrick argues that the hopes of the movement should be placed there and not in “wild schemes for apocalyptic rupture.”[5]

This is a deeply rooted debate. Political conclusions derive from theoretical and strategic positions. It is no coincidence that these arguments were preceded by a theoretical and political “revival” of Kautsky. The view they put forward is that in “advanced capitalist democracies” a social revolution is not a possibility, and the struggle for socialism will take the form of a succession of partial democratic ruptures that combine electoral triumphs with mobilization to defend the reforms that these governments push.

Viewed from this perspective, elections become a strategic terrain. The consequence of this is that winning elections becomes the axis around which politics is structured. Everything is calculated on that basis. This completely ignores or dismisses the structures of class power that are part of the DNA of the capitalist state. Electoral politics is seen as the road power, and not as a tactical means which can be used to build an independent structure and transform that energy into a force that can express itself in all areas of class struggle. This always ends up requiring a series of political and programmatic shifts to the right in order to win votes. History has shown where this ends.

The pandemic and the economic crisis have changed the concrete life experience of millions of people. We have witnessed a growing cycle of protests that have the working class as the central protagonist. We can expect these changes to have a profound and sustained impact on class struggle. The trend towards social and political polarization of the last decade will increase and we will see greater radicalization.

In this scenario, debating strategy is a key issue. Our horizon cannot be marked by the electoral calendar and the Democratic Party, nor can we conclude that all electoral tactics are opposed to strategic construction. The revolutionary left must also not approach the millions who placed expectations in Sanders by saying “I told you so.” Thousands of the activists leading the fight against the crisis today supported and even actively participated in the Sanders campaign. Many others did not. Both are fundamental to advance a strategic political project that lays the foundations for a working-class party. This is the task of the moment and can no longer be postponed.

[3] Where Do We Go After Last Night’s Defeat? Band Dustin Guastella. Posted In Jacobin. https://jacobinmag.com/2020/03/bernie-sanders-democratic-primary-results-joe-biden

[4] Bernie Supporters, don’t give up! By Eric Blanc. Published in Jacobin https://jacobinmag.com/2020/4/bernie-sanders-campaign-supporters-2020

[5] We lost the battle, but we’ll win the war. By Connor Kilpatrick. Posted In Jacobin. https://www.jacobinmag.com/2020/04/bernie-sanders-presidential-campaign-democratic-socialism