A revolutionary perspective about the ongoing imperialist tension between Turkey and Greece in the Eastern Mediterranean on the natural gas resources. 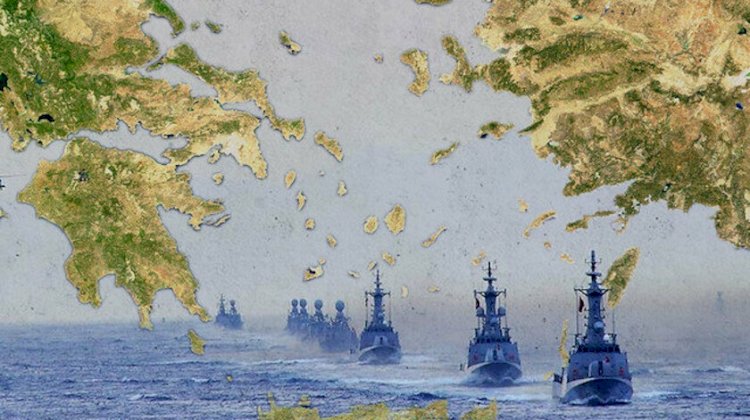 "It was proportionate. We didn't send an armada," “When it comes to Mediterranean sovereignty, I have to be consistent in deeds and words…If you say words that are not followed by acts ... What France did this summer was important: it’s a red line policy.”

These words belong to the President of France, Macron. The issue is the competition on sharing the natural gas and oil resources in the Eastern Mediterranean. Apart from that, the top problems between Greece and Turkey are rekindled; the power struggle in Cyprus, the Eastern Mediterranean and Aegean is escalating again. The exchange of threats with Greece became a part of the daily political agenda. Warships increase tension in the Aegean Sea, dogfights continue in the air, enemy radars lock on each other…

Turkey and Greece fronts are on the alert. Naval forces of the Turkish Armed Forces are on the field with its all forces. According to the NAVTEX announcements, frigates accompanying seismic exploration ships are intimidating the rivals in Cyprus, the Eastern Mediterranean and the Aegean.

The French news agency AFP shared with the photographs of the Greek Army’s landing of troops by ferry to Meis Island, which is within spitting distance to Turkey. There is no point in objecting that it’s against the treaties because from now on, only brute force talks. The parties are conducting military drills successively; even the United Arab Emirates’ warplanes are in the game.

Will there be a War?

AKP government is in the mood crushing Greece: “None will protect you (Greece)” completes this image of this unrealistic great self-confidence. By the way, we all know that the main target of these massages is the internal politics. Speaking in the pro-media, the military experts are in the mood that “we can easily take Meis, which is across Kaş, and the small islands around”. They are busy telling about victory scenarios on paper: “If they resist, we will take over everything in Rhodes or anywhere.” The more these people thrill with the chauvinistic atmosphere, the more they think they are gaining favor.

However, taking a war initiative is not that easy. Who’s gonna make the move to start a war? After all, Greece is the party whose borders are being crossed. The navy of TAF appears in the region from Crete to Rhodes and seismic research vessels continue their activities.

It is clear that Greece will not want to fight with its powerful neighbour on a wide front from Evros to Cyprus. It is also clear that its allies, France or the EU, would not choose to fight for Greece in such a war. On the other hand, it is obvious that Erdogan’s image fell into a bluffer and that gives courage to Macron, who wants to limit Turkey. In the end, not only Erdogan but also Macron and Miçotakis need nationalism rise and a strong leader image that will make it possible for them to do whatever they want.

Now, even Sisi is making propaganda that they have put forward their red line in Libya and intimidated Erdogan. Macron keeps on telling about the word “red lines” nowadays. Previously, in the  Blue Marmara tension with Israel, in the case of the priest tension with the USA or in the attack carried out by Russia in İdlip in February, costing the lives of 37 soldiers, Erdogan had to step back. In brief, the competitors have grasped the bluffing. This is why the French front responds to the bluffs by raising voice.

On the other hand, Greece is still the side whose borders have been crossed and it should be Greece taking the war initiative. It is also very difficult for Greece to switch from defense to attack. Yet, mutual provocations can get out of control, serious accidents may occur. No one can ignore the possibility that war might be triggered at some point in the imperialist games.

What a tremendous leap forward would be a military success against Greece for Erdogan! But this is not that easy. Neo-Ottomanist dreams are glorified inside by the partisan choir, but those in power are timidly cautious. We mentioned the examples, but the last showdown in Libya was a tremendous test.

TAF and the militia in the field were actually very advantageous in front of Sirte, but after the bombing of the TAF air defense systems in Watiye, which was a very heavy attack, the dreams came to naught.

When a large scale natural gas area was found in the Eastern Mediterranean, the states of the region were deeply occupied with extracting and sharing these reserves. While Egypt, Israel, Jordan, Cyprus, Greece, Italy and even Palestine were taking part in the giant oil monopolies, Turkey was excluded. This has been the consequence of AKP’s aggressive foreign policy which is based on fighting with everyone. Yet, AKP started to turn even this failure into an opportunity for the domestic policy through victimization and nationalism.  The nationalist stories such as “ the enemies who attempt to block the strong Turkey” gain acceptance by the AKP base. Even we see that, not surprisingly, the so-called opposition parties back up AKP about the Blue Homeland project when it comes to nationalism.

To the Labourers of Greece and Turkey

Labourers of Turkey and Greece must unite their struggles against the bourgeois and their nationalist government with an anti-war struggle. We see that many opponents or self-proclaimed “leftists” take sides with their nationalist camps when it comes to war. The same situation is experienced in Greece. Class-conscious workers must recognize these buttresses of the exploitative system.

During the severe economic crisis that lasted at least ten years, the Greek working class became deeply impoverished. In Turkey, because of the economic crisis going on for at least two years, the workers are getting poorer day by day and this will continue for a while. Under these circumstances, we must not allow the bourgeoisie to make people forget the real problems by means of nationalism they have been promoting. Let us be aware that the stories of national unity, the war news serve for the heavy exploitation of the working class in both countries.

We are sure that even if Turkey gets its share from that gas in the Eastern Mediterranean, it won’t be the working class who will benefit from it. But the certain capitalist groups, the corrupt circles around the government, and the some bureaucratic appointed to the management positions in these companies… etc. Poverty, heavy exploitation and unemployment will be the only share of the labourers.