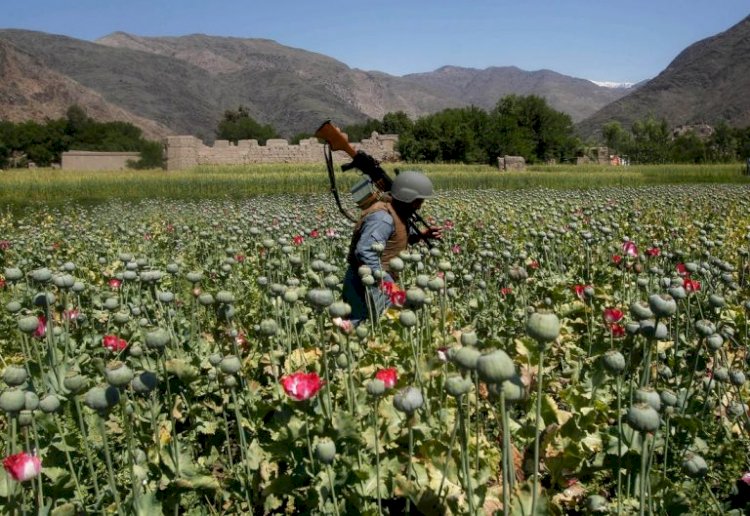 According to the 2013 World Drug Report by UNODC (United Nations Office on Drugs and Crime), Afghanistan is the most of the drug-producing country in the world. It has retained its position up to the present yet more drug production is increasing day by day. Such that the amount of this poison produced between 2003 and 2013 is beyond measure. Poppy cultivation area was estimated to be 209000 hectares in 2013, which is actually a record. However, in 2001, poppies were planted on 8000 hectares. According to research conducted in 2010, it is estimated that there are one million drug addicts in Afghanistan. Nevertheless, the actual figures are so much more than this data. Therefore, Afghanistan faces a greater threat than terrorism and Western Imperialism. The media constantly brings phenomena such as war and terror into the forefront, but it is not mentioned how the West has dragged Afghani people to death with drugs and turned the country into a narco-mafia structure as a result of the ongoing occupation since 2001. In Afghanistan, drug trafficking is prohibited by law and has various sanctions. However, it can be clearly noticed that this situation is very different in every corner of Afghanistan.

In Afghanistan, those who transplant and trade drugs are the notables of the state and the forces that protect them. Many members of the government have made incredible fortunes from drugs. Such that, in an article of the New York Times, published on 5th October 2008, it is stated that Hamid Karzai’s brother Ahmad Wali Karzai had been engaged in drug trafficking. Governors, police commanders, and officials of almost all provinces of the country have a finger in the drug trade. Some of these are known as the most famous drug mafia in the region. For example, Abdurrab Rasul Sayyaf (Jihadist who fought against the Soviets) purchased 8 cargo ships to trade drugs in Karachi, Pakistan, and some Arab countries. Along with delivering drugs to US military bases, he sends some of these drugs through the Spin Boldak border to Karachi and from there to all over the world. State authorities become partners with him by protecting this person. On the other hand, the drug traffic of the Northern region of the country is led by “Marshall” Rashid Dostum, and his rival Ata Mohammad Nur, who was the former governor of Balkh.

Even though the government officials state that they are determined to eradicate drugs and they even established a ministry for the sake of that purpose (Department of Drug Fighting), these are done to delude people. In fact, the number of drug addicts and users is increasing every day and tens of thousands of families are devastated and suffer from deaths every year. The extent of the disaster shows itself in every corner of the country. It can be clearly observed under the bridges of the capital city Kabul and out there one can easily face this brutality and disaster.

Afghanistan’s transformation into the heroin center of the world was one of the USA’s and its allies’ plans so that bosses can pocket billions of dollars every year. Since the 1980s, they have gone after this cause and achieved that. This is because they are very well aware that the drug trade is one of the most profitable businesses after oil and arms trades. From 2001 to 2009, when Afghanistan was invaded by the USA, drug production increased 35 times more. According to the official figures in 2009, 6900 tons of drugs were produced. However, it was 200 tons in 2001. According to the United Nations’ data, the money obtained from drug sales in Afghanistan is more than 200 billion dollars annually. Yet, only 2-3 billion of this money goes back to Afghanistan. Not surprisingly, the areas where drugs were most cultivated, such as Helmand, Kandahar, Zabul, Farah, and Uruzgan, were guarded by the USA and British soldiers. Besides, Shindand and Kandahar Airports in Herat Province are also used by the USA and British forces and the drug shipment is mostly carried out through these two places. Tens of Afghan citizens, who were working in these places and witnessed the drug shipments with large military aircraft, have been killed for the sake of keeping the crime as a secret. It doesn’t matter they are journalists or civilians, people are not allowed to enter these places. Not only military aircraft, but also some civil airline companies such as Kam Air are involved in this. For example, the chief of police at Herat International Airport informs a journalist in 2008, stating that he stopped an airplane belonging to Kam Air, full of drugs when it was about to fly to Iran and asks the journalist to come to the airport. The journalist goes there and photographs the event, but within a few minutes, the chief of police is immediately arrested and taken away by foreign soldiers, and still, there is not a sight or sound of him. The journalist cannot avoid ending up in prison for a long time after the photographs are taken away. Dozens of journalists are threatened or killed in this way while trying to document such events. There are many similar cases; another example is the BBC reporter Abdul Samad Rohani. He was abducted and brutally murdered by a drug mafia while working on drug crimes in Helmand province on the 7th of June 2008.

It is still not forgotten how the USA was committing drug trafficking during the Vietnam War. So much so that it has been subject to some Hollywood movies. In 2013, some media sites shared photos of NATO and Afghan soldiers guarding drug fields together in Helmand, which clearly proves who the main drug traffickers were. According to Freedom Radio, from its invasion of Afghanistan until 2014, the USA allocated approximately 7 billion dollars to this poison and Afghanistan authorities. This money was pocketed by president Karzai, ministers and other officials. However, if this money was really spent on the fight against drugs, the situation would be quite the opposite today. Nowadays, millions of money is in the pocket of Eşref Gani administration in the name of fighting against drugs. In fact, this money is a kind of “share” of the high state authorities to make them turn a blind eye. The actual victims are the Afghan farmers and the poor. For example, a relative of this articles’ writer is a farmer in the village of Balkh. Last year, this farmer was forced to plant poppies in his field instead of cotton by the police forces. They threatened him saying that if he did not plant poppies, they would take away his field. The farmer conceded to grow opium, but he could barely get enough share from the product he sowed.

As long as Afghanistan continues to be ruled by imperialism and its puppets, it will not be able to get rid of this poison, the number of addicts will increase each year and millions of people will continue to die because of it. Because, this poison, which plays into imperialism’s hands, brings poverty, death, terror, and reaction with it for the Afghanis. The only solution for Afghanistan and Afghanis is to get rid of imperialism and its puppets; sweep away all their other scum. In order to achieve this, there is no other way but to act together with the socialist, intellectual, and progressive groups together.

SEP Statement about the Turkish Republic Day: Forward for a Socialist Republic and...