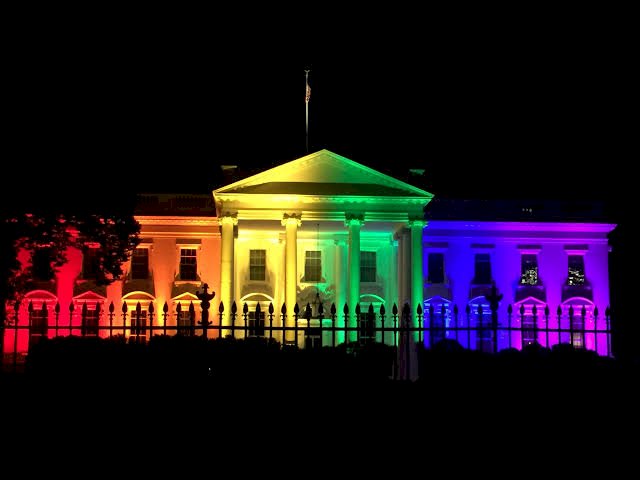 The embassies of the EU, Canada, and Britain in Baghdad raised the LGBTI flag in May, which resulted in harsh discussions in Iraq. The U.S. had found this move in Iraq successful that the same "progressive" move is put on stage in Moscow. British and Canadian embassies, the closest allies of the USA, also participated in the show in Moscow.

The rapid internalization of the LGBTI + identity, which has been oppressed and being oppressed by the system, is a striking example of the limits of identity politics and the flexibility of the capitalist system. In the USA, which is more conservative than Western Europe, it is clear that things have changed. Nowadays, the White House is shrouded in the rainbow flag, the mega monopolies of US imperialism attends the Pride, even the police participate in the Pride march ...

And finally, the USA is using the pride flag in imperialist competition. This move against homophobic-conservative-authoritarian Putin also means the US intervention in Russia. In this way, the USA will lead the anti-Putin social opposition, a part of which has sensibilities about democratic rights, that make the US the ideological-political leader and liberalism remain... The US has never left the Cold War tactics aside. Meanwhile, the LGBTI identity is used as an instrument for the US imperialist interests.

A similar situation happened in Iraq. Western imperialists are well aware that young people and laborers hate the corrupt order in Iraq. They are tired of authoritarian regimes, Islamists, corruption, and futurelessness. Unfortunately, under conditions where the socialist vanguard does not exist, the masses see the Western-type parliamentary-democratic systems as an alternative. We can talk a lot about this, but in order not to extend the article, let's underline the following issues:

Therefore, Iraqi and Russian class-conscious workers and young people have to raise the flag of struggle for socialism. For this, the mask of democracy worn by Western imperialists should be unmasked and social opposition should not be canalized into liberalism and diluted.

Equality of LGBTIs in the capitalist system is just as imaginary as democratic capitalism is in the underdeveloped countries. Therefore, class-conscious LGBTI individuals should explain on every platform that oppression does not end within a capitalist society. We have to fight against the domestication of the LGBTI struggle in capitalist boundaries and turning it into an instrument of the system when needed.