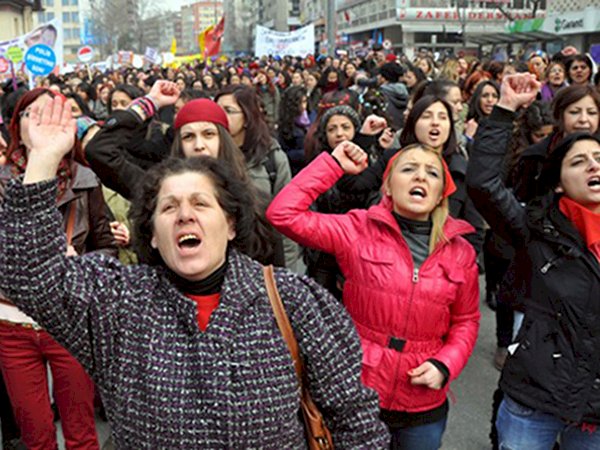 First, let's begin by clarifying why there is a need for discussion with feminism. If feminism is part of a woman's struggle for freedom, is it not necessary to support it (or at least give a critical support)? The answer to this question is related to how you deal with feminism. Although the struggle for women's freedom in social perception is identified with feminism (this is done by the right wing to humiliate and marginalize at some point), feminism is an ideology, which has its answers of the following questions: on which basis, against whom and how will women fight. So, feminism is not the sole and possible form of struggle. Feminism has been competing with Marxism throughout the history.  Therefore, for revolutionary Marxists, there is nothing more natural than to argue and compete with feminism as an active subject of the women's struggle in recruiting women and leading the women's movement; it has always been like this. However, the left, which has been under the deep ideological influence of postmodernism in the last quarter century, has left almost all authority to feminism in the struggle for women's freedom. Almost all the radical left in Turkey define themselves as “socialist feminist.” This strengthens the hegemony of feminism in the woman movement and makes this debate more important for the revolutionary Marxists.

Feminism, aside from ensuring women's emancipation, only confines women to its own main agenda of oppression. Although feminism provides “a secure place” where the oppression of women is reduced for small privileged groups of feminists and their circles (which is also debatable, to what extent is it possible to be completely isolated from social life after all), it points to a dead-end street for the salvation of billions of women.

One of the main criticisms of feminists against Marxism is the accusation of reductionism. Marxism is criticized in this way for its claim that Marxism relates every problem to the class relations and does not give enough importance to women's oppression. Is this really the case?

Before starting to evaluate the relationship between Marxism and the oppressed, it should be noted that the direct victims of oppression and those who struggle against it – whatever that oppressive relationship - put this oppression agenda at the center of their world perception. The Kurdish issue in terms of the Kurdish national movement; The issue of women is the most fundamental issue for feminists; this list goes on and on. There is nothing surprising for those who experience  the oppression most painfully to put this agenda at the center of the politics. But can these problems be solved on the basis of a division which make everyone focusing on their own problem? Especially when the oppression relationship overlaps, and each oppressed group is divided due to other oppressions in itself… This would mean an ever-shrinking struggle. The women's movement worldwide suffers from this.

What is important with Marxism is the fact that Marxism establishes the link between oppression and exploitation. Marxism basically defends that oppressions stems from class societies that means oppression can only end only with the abolishment of it. Marxism states that the exploiters, who constitute a small minority of the society, benefit from the oppression relationship in order to maintain their power. In this way, capitalists prevent the exploited who have the potential to unite against them. Thus, it shows how the oppression relationship relates directly to the continuity of the exploitative system and provides a way emancipate from oppression.

Marxism is neither blind nor deaf to the struggle of the oppressed; On the contrary, it is one of the basic features of Marxism that the exploited ones also include the oppressed for their success and their struggle must be owned by the workers. Lenin, in a very significant way, attributes the social-democratic (in the revolutionary sense of the time) consciousness of  workers is not only the awareness of exploitation, but to reject all oppression relations: " Working-class consciousness cannot be genuine political consciousness unless the workers are trained to respond to all cases of tyranny, oppression, violence, and abuse, no matter what class is affected — unless they are trained, moreover, to respond from a Social-Democratic point of view and no other. ”[1] From this perspective, the primary task of the revolutionaries is to educate the working class to fight against all kind of oppressions and to centralize the fight against the ruling class by uniting the struggle of the oppressed and exploited: “When we do that (and we must and can do it), the most backward worker will understand, or will feel, that the students and religious sects, the peasants and the authors are being abused and outraged by those same dark forces that are oppressing and crushing him at every step of his life. Feeling that, he himself will be filled with an irresistible desire to react, and he will know how to hoot the censors one day, on another day to demonstrate outside the house of a governor who has brutally suppressed a peasant uprising, on still another day to teach a lesson to the gendarmes in surplices who are doing the work of the Holy Inquisition, etc.”[2]

A Real Solution is not Possible without A Correctly Defined Problem

The main problem of feminism lies in its inability to correctly identify the source of women's oppression. If you put the patriarchal system like feminism at the core of the woman's oppression, you make women unsuccessful in their struggle against this oppression. Firstly, the material basis of the patriarchal system cannot be revealed, so that the oppression of the woman will come to an end when this foundation is destroyed. The patriarchal system, is proposed in a way that, it is almost like the result of male nature (!)  and explained by biological and psychological sources. Since there is no way to change  the nature of the men all around the world this means you have no solution. Especially considering that feminism exclude men from women's freedom and equality struggle, men - even a small portion - do not have a chance to change. In this case, you will either establish a society where only women live, or you will not go beyond just being a protest against women's oppression. That's what happens.

Marxism, on the other hand, can show a way out as it can identify the cause of the women issue. Marxism suggests that women's struggle for emancipation is not possible to achieve ultimate success under capitalism, because there is a direct relationship between the capitalist system of exploitation and women's oppression. Engels, in very early dates, showed that the oppression of women stems from the emergence of private property and class societies. Therefore, liberation of women requires the abolishment of class societies.

In the capitalist system, the source of women's oppression is the family which is the center of reproduction of the capitalist labor force. The woman raise new generation of workers and fulfill the domestic needs of  workers in production every day and women do them free of charge for the capitalists. An indispensable opportunity for a profit-centered system. Since the family performs a critical function for capitalist system, its foundation of existence and the position of women in the family is supported by ideological means. Sexist ideas about women are dominating the society on these bases.

The socialization of the reproduction of the workforce is the material condition of women's liberation. In other words, women cannot be liberated without socializing of the childcare, housekeeping, food, etc., that consume all creative potential of women. This socialization is also not feasible under capitalism. Capitalism certainly has enough resources for the socialization of domestic work but the basic logic and functioning of the system blocks it. Therefore, this profit-centered system must be eliminated for the socialization of housework and childcare. Of course, the oppression of women that has lasted for centuries will not come to an end suddenly with the socialist revolution, the struggle of equality will continue under workers' power. However, with the end of the private property system, the material foundations of the woman's oppression will be destroyed, and in parallel, sexist ideas produced from material life will also receive fatal blows. The struggle against all this ideological heritage will begin.

Just because Marxism says that women's emancipation lies in socialism does not mean that we will just wait the revolution to come to be equal. The argument of Lenin that the greatest teacher of the masses is the struggle itself is also true for the women question. While struggling for their own rights, women will also learn to develop consciousness, and become the vanguard of the struggle for the complete dissolution of capitalism. Small gains pave the way to bigger struggles, and they provide both motivation and inspiration to future struggles. In this context, Marxists have been and will be the leaders of the struggle for women's rights. However, for Marxists, this struggle is not limited to women as feminists argue; it is the collective struggle of male and female laborers. Of course, not only working women are subjected to the oppression; bourgeois and middle-class women also suffer from oppression (Let's also point out that the class position of women determines the quality of the oppression relationship). However, the ally in the struggle for the liberation of the working class woman is not women from the upper classes but are male laborers. Because upper-class women have a stake in the continuation of capitalism and exploitation, even they are oppressed. Therefore, they will not be the subjects of a total struggle against the system of exploitation.

Male workers, on the other hand, are indispensable allies of female laborers in the joint struggle that will end both oppression and exploitation, as the system exploits them also oppresses women. The collective struggle of male and female laborers will enable men to be educated on the women question and develop their class-consciousness in this regard.

As a result, the emancipation of men and women will be the fruit of a this holistic perspective. The ultimate liberation of all the oppressed and exploited is common that is the abolishment of capitalism. All other solutions are far from promising the real freedom and equality.

[1] Lenin, What is to be done?,https://www.marxists.org/archive/lenin/works/1901/witbd/iii.htm

Re-Sharing of the World, Ukraine and Revolutionary Defeatism